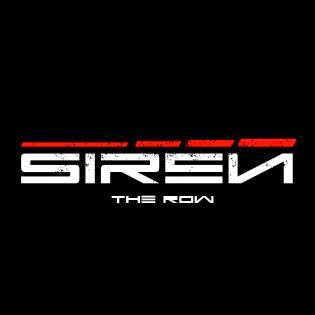 Hard flavorful cider mixed with a jolt of Monster Speed Drink is the spinning convulsive motives of guitar riffs, driving beats. A salacious brink of Classic Hard Rock streams forth from this titillating European band out of Italy, Siren and their album The Row.

Siren's lineup consists of: Samuel Frondero (Lead Vox/Guitar); Jack Nardini (Lead Guitar/Vox); Marcus Kawaka (Bass/Vocals.Synth); and Mark McKenzie (Drums). And the eleven track album, The Row brings it all around and is the file with masters of Hard Rock. They deliver the pizza, with all the trimmings of major tunage.

The opening song on The Row- Swan Song, took me by surprise as it seems to hold the most chatter of deliverance, as the song melodically pulls in female vocalist, Zeinab M'Barek, and her hauntingly comprised vocal abilities. Zeniab's vocals belt a mixture of bluesy, hypnotic measures, and hard rock opera, as the song wings its way into blending with a flute, piano, and guitar. Dr. Saint, continues the marching head banging drills in a timing that stays with you. Opening a fast drum beat, bounces to rocker and mover, Mission. Lonely, delivers the feeling of “a night so lonely...do you know you must show me...” synth over vocals help us to “loose control,” a song with a hard wave. Track 5, '92 eases rock recliners into listening to a melody of precision.

The hard drive comes back full force with, Love is Gone, a wide open road song with windows rolled down and the auto speakers jacked to the max. The European influences are heard in the song, Waves, reminiscent of the 80's big push for Super Rock Groups sound. Roger Sabbath swings us back into driving guitar riffs. Soft rock opens, Carpet, then a driving rock wave beat sound, mixes itself into the layering with hard rock. Spit, can stand as a rock'n punk drive.

Vinyl popping cracks a sweet lullaby of violin strings, stroking the fine hairs of silkiness, as the album climatically delivers, Falling Down. Precisely in-tune with how the song plays out, one will find a spiritual experience of true rock, “...and remember where I’m from...” my favorite song off the entire album, is Falling Down.

All the key components of the bitters of assiduousness burning droplets, softened by the cool lingering exchanges offer up a modern hard rock album that is sure to claim your next music purchase. Siren has mastered a rock n roll sandwich! Swan Song is the top bread, and Falling Down is the bottom... and contained within is all the meaty components of a true rock masterpiece.

Put on your favorite headphones, kick back and experience, Sirens.