June 09, 2015
Following a long run of a certain sound coming out of the UK, Rudimental, is leading the way out of what has been considered by many to be a long stale run of repetitive boxed sounds. Not claiming themselves to be either right or wrong in their approach, nor claiming anyone else is either they strive to be who they are and to stay undefinable. A fresh approach as Rudimental reaches back to tradition to move forward into the 21st century of modern music... a place where the soul can turn loose and dance.

Song: Are all of you originally from Hackney, and talk a bit about the beginning of the music.

Rudimental: Three out of four of us grew u p there, you know doing all the things that kids do together and hanging out. Hung out in the same schools. As time went on and we began creating music we began sharing it on Pirate Radio (illegal radio) stations here in the UK.

Song: Were you all particularly working towards creating something to break through or out of the underground, illegal radio stations and get noticed by a record label?

Rudimental: No, not at all. It just happened as we were creating, it wasn't planned. Everything we do isn't planned, its kind of organic, organized mess. We wanted to share our music, and pirate radio at the time could help us do that. We were getting heard. We kept growing and growing. It was a matter of time before we got noticed. They took a gamble on us and its worked out.

Song: You mentioned the word, Organic, can you describe what that means?

Rudimental: Well yeah, going back to the studio we kind of work it old-fashioned. We work each, and later add the electronic sound, and we get others to help us write the lyrics and connect it. It's really taking a core idea and searching vocalists to complete. People want to hear live music and have it been expression of self. That is a tool to use.

Song: Is the name of the band more of an oxymoron than a true descriptive?

Rudimental: That name actually came from one of the band members, Kesi Dryden, as he was growing up and taking piano lessons. He kept forgetting his book of Rudiments, and his music teacher kind of labeled him on that. So he took that on himself as a name of irony. We aren’t really a rude bunch of guys, but we might be mental. (laughed)


Song: Does your sound cross over to both sides? Underground as well as Mainstream?

Rudimental: Our music is so different from to what is mainstream, in that aspect it crosses bridges from both sides. It's really never been an issue for us. Our songs have really been all they are to all people. They embrace the culture we grew up in. 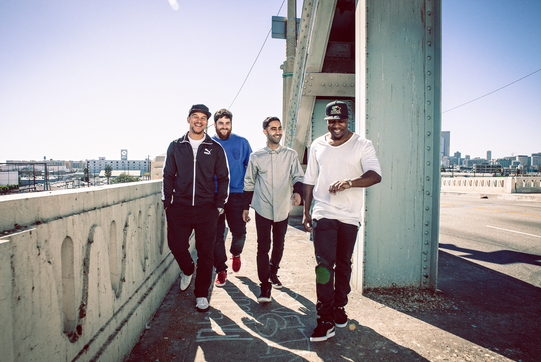 Song: How important was it to you to break out of utilizing the lap top to create your electronic sounds?

Rudimental: We play our instruments as freely and organic as we can. Even when we make mistakes live it adds to what we are.  You won't get that with a lap top. At the same time we've no problem with someone creating a beat with a laptop, our way is not the only way... it's about how it sounds, does it sound good? If so then, cool.

Song: “Never Let You Go”- new single from the new album coming out in September... talk a bit about the words, the structure and the video creative.

Rudimental: It is a journey of life. Coming from various places, something we can relate to. Where we came from wasn’t necessary the best to come from, but you found your way, you found the best. So our videos could have the girls and the champagne, but we wanted to create a message. With this one we didn’t want to use the color of our skin, we wanted to do it with true colors in seeing people in different places in the world. Purple, green, blue... it symbolizes it doesn’t really matter what color we are at the end of the day we all come together.


"We the Generation" Album Contest

Song: How has the response been on the new album cover contest, "We the Generation," release date: September 18th 2015 on Asylum Records?

Rudimental: Its been great, and it's a different way to get the fans involved. They pay our bills, they are our fans and we want to integrate them into our love for music. In our first album they contributed as well... we played them live, unfinished at times, and the gauging off the fans helped lead us to the directions we would go next.

Song: Can you give a brief overall comment on the flavor of the album?

Rudimental: Well first of all the album is called we the generation is because we have been fighting so long and so loud to get our sound out, its a whole new sound, using where we come from along with the influences of our family...

Rudimental- Founded in traditions mixed with today to bring forward to a whole new generation a new sound that cannot be defined.

Music Video:
"Never Going to Let You Go"
off the new album.


From the BBC Beat:

Amir Amor- Amir Izadkhah, better known by his stage name Amir Amor, is a British musician, record producer and DJ of Iranian descent. From late 2011, he has been a member of the band Rudimental.

Pre-Order: Rudimental "We The Generation" (album)