There was a time in the history of music where 'Supergroups' would be announced and a conglomeration would emerge to take a bite out of rock history. Stepping forward as an EPIC rock sound a momentous occasion in rock has occurred as the band, Night Argent has stepped forward. Not as a supergroup of yesteryear, but as and Epic Group of today and tomorrow. Sending out lyrical notes, and melodic memories of enraptured rock n bliss that thrives in the pulsations of the soul. Take an afternoon and spin Night Argent... as it will turn into a life time of the greatest sound to come out of Washington State to the rest of the musical world. It is time, for Epic, it is time for Night Argent.

SR: What do you all think so far?

Shane Santanna: It has been nice being able to pull into this stop early too so we could stock up on some new supplies.

CM: We had a hotel room last night so that was pretty nice and checked out some of the nightlife.

SR: What mode of transportation are you using on Warped Tour?

Evan Taylor: We have a truck/camper/trailer with no AC, so it's a good time. (laughed) Actually we have AC we just can't run it, as we had bought the wrong generator, so we travel at 60 MPH with the windows down and make or own cool air.

SR: With all the craziness on the road, there has to be new song writing being developed as you go along?

CM: Oh yeah, there always is. We are all writers in this band, actually before we all came together as a band we were all solid writers in music. So, when we are on the road we just continually write, then when we get back home to our studio we just start going through everything and putting it altogether.

SR: Now are you all on the whole Warped Tour?

Zac Burrell: We came on for the first two weeks, then we are off for July, then back on in August. We actually had won the Ernie Ball Battle of the Bands, so this just happened to all come together and work out really great for us!

SR: How did it feel when the announced you had won the battle of the bands?

JS: We were amazed, because we actually didn't even realize it was a competition. And they announced our names and wow, it was just unbelievable. It was like a miniature “American Idol” moment, because you know we are all just a bunch of bands all hanging out together. 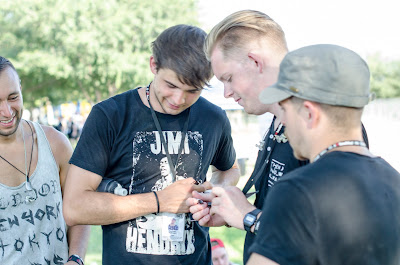 SR: The Warped Tour I kind of like to think of as a Oreo cookie. You've got the top cookie and bottom cookie... then all the fluff yumminess in the middle. So, going into this, on your top cookie was the winning of the battle of the bands... what do you have coming after the middle part, towards that bottom cookie half?

CM: Well, one of the big things we got to do is, we released our EP and then after Warped we get to go into the studio with John Feldmann who has produced so many amazing artists and we get to work on a second EP with him. Then we are going to record some more music videos for our fans, and start playing the West Coast and North West Coast a lot.

SS: That will be our main concentration right now, as there are a lot of great historical places to perform and its in near to where we are from. Our thought is to build where we are and when that is catchy- then go out from there.

CM: Having that love from your home team, no matter where you are playing in the world, there is nothing like it. It hits deep when someone from our locale messages us and tells us they really love our music. So that’s really why we want to continue to build that first and then hopefully branch out.

SR: What is the plan when you all are home for the month of July?

ET: Working on music, and a couple more videos too and just continue to get ready for whatever comes our way.

SR: When you as a band visualizes a video, how does that form? Do you prefer to do videos where you are live and playing- or to have a storyline that goes with the song?

ET: We like to do stories with our videos, and mix it up a bit. 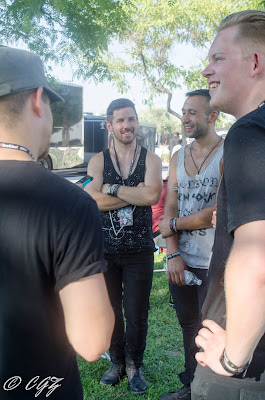 CM: And many times it depends, sometimes video concepts are good with live performance shots and other times more with a story. We like to offer a variety and I think that is good, this gives a chance for people then to really find something that is their favorite.

SR: Do you have a working title for the next EP project yet?

ZB: No not yet. We want to hear the sound first before the title comes. Sometimes it happens first, it'll be like boom, but sometimes you don’t even get it until you’re done with your last song.

SS: Sometimes you run out of creativity and then you have to self title the EP. (laughed).

Night Argent brings together a sound that is uniquely all their own. Each member, Chase Manhattan, Shane Santanna, Zac Burrell, Evan Taylor and Jeff Stachofsky all bring a part of themselves and collectively create a package that delivers. I think what I appreciated the most about them was how comfortable they each seemed to be with themselves and with each other. Working well in discussion rounds, and even on stage performances... keeping the timing of who they are... and bringing in their fans closer to entering the musical rock of Night Argent.

The band all takes care of each other at home and on the road. Hiking and climbing Badger Mountain together and then even out on the road trying to exercise and eat as best as they can. It takes a team to work together on many levels to create a successful group, Night Argent has a hometown pride, hailing from the state of Washington, and presenting all they are as they continue to tour, write and produce new music, build their hometown fan-base, and connect all over the world with new Night Argent fans. 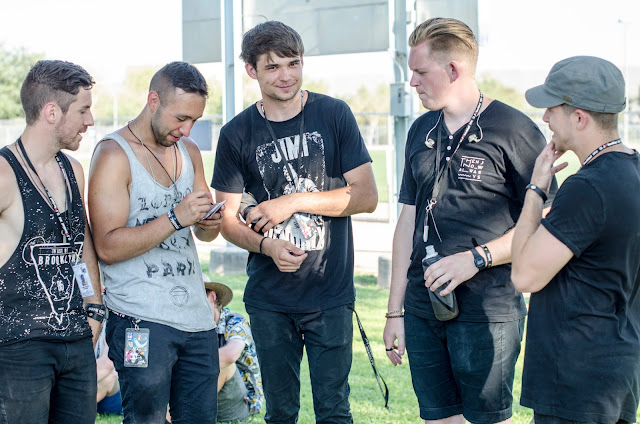 And you all be ready for more and more music as they are building their own studio lovingly known possibly as, “The Scarlet Room.”