Some of the coolest cats have come from Island Records, and The Karma Killers are certainly one of the coolest of the cool cats. Sounds that make the hips move and the heads bob along to a punktified new wave. The Karma Killers new EP, “Strange Therapy,” dancing tune-age give spins with “Coming of Age and Domino.” Micky sat down with me recently and as I sat across from him all I could think of is the times of Bono, The Bravery and then their sound matched the same power of blazing rounds. Polyester loud floral prints, killer punk wave hair and moments of sheer rock ecstasy make The Karma Killers an instant favorite of unique danceable music that is contiguously delicious shot of dope. Can't wait for their full length album due out hopefully early 2016!

Song River: Hey Micky thanks for taking a few moments. Tell me how this mix is happening and feeling for you all?

Micky James: Everyone has been totally receptive on the Warped Tour, as we are really unknown. We have been the 'Darkhorse' on the tour. Our sound is Alternative-Punk, New Wave, Rock band and the fans have really been giving us great feedback all the time. They've been pretty into it, as I can see them smiling, their heads bobbing. It gives me some great feedback watching their reactions and in turn knowing what to do to bring them in and entertain them too.

SR: Where do The Karma Killers come from?

MJ: We live in New Jersey, but originally we started our career performing and what not in New York City. So, we are kind of based out of New York City.

SR: What have you noticed in music and music fashion between in the west and east coast?

MJ: The music scene in New York has always been real active, but I feel that it has been getting kind of at a stalemate, even the fashion. NY needs another Strokes or something... the prior bands started their own thing, and it feels like no one else is doing that out of that big city. And if you don't follow the trend that has been set, well it makes it hard to stand out.

LA fashion has more tattoos and stuff, very coiffed and NY seems more punkier, grungier. It's easier to get a real idea when I am really into the city and culture, but being on such a fast paced tour you don't get that time.

SR: How do you help direct your sound to those new coming to you?

MJ: I think we just stand out with our image, maybe it's subconsciously. There is no real concept behind it. It's just natural for us to be who we are and see if they catch what we are doing.

MJ: “Coming of Age” My bass player and I had written that song a couple of years ago. It was like an instant, and we were hanging out at my house trying to write and usually writing doesn't happen when you're trying (laughed) but it just came together and we put it out on our label, Island Records. Then we just released, “Domino.” The new EP, “Strange Therapy,” is just great.

SR: I was reading you were signed to Island Records, that must be a kick as so many great bands have come from there and are on that label.

MJ: Yes, it was like wow. I have listened to so many great bands over the years that are on Island Records, so when I was starting this band and we are now on Island... it is great. Think about it U2, The Bravery and we love them, and The Cranberries, it was amazing to have it all fall into place.

SR: I was thinking about how your sound fits into Island and The Karma Killers hits it right in.

MJ: It was crazy, we love it. When we released our EP and went to our office in LA to pick up the new EP's and I looked on the back and it said- “Island Records” and I've been writing music since I was 16, and to see it, wow.

SR: Who was the first person you called when you picked it up?

MJ: I think I took a couple of cell phone shots and sent one to my mom (laughed).

SR: What's on the agenda after of this tour? 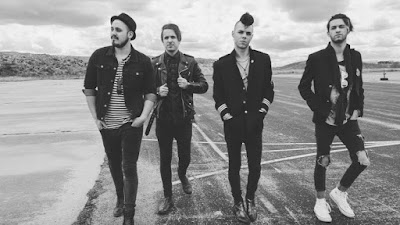 MJ: More touring, across the world. A fall tour. I sat too long in my room writing... I am ready, we are ready to get out! (laughed) I know before 2016 we want to do a full length album, at least before Spring.