Our Last Night
Interview on the Warped Tour 2015

Today's music market has probably allowed for more bands to remain independent than at any other time in the industry. Carving out their own niche has been the road band members- Trent Wentworth, Matt Wentworth, Alex Woodrow and Tim Molloy- of Our Last Night are driving. Recently off from a long tour over in Europe, making their video from their new album, "Younger Dreams," and then across the United States joining the Vans Warped Tour, has this band moving, ready and firing on all pistons as they continue to rock out around the world.

Song River: We were just chatting about this being your first Warped Tour, you've had a successful album, this next one just released “Younger Dreams,” YouTube hits are skyrocketing, and you came before Kevin Lyman, and BOOM you are now on the Warped Tour. What are some of the things you have done to prepare for well over 40 shows?

Trevor Wentworth: (laughed) Well, honestly if you're asking a band about being prepared we may not be the best one, but we did just come off a European tour that was probably about 30 or 40 shows. We have actually only had ten days off in between, so we didn't have that much time to be prepared, we also shot our music video while we were home. We directed it, produced it ourselves, we just always have a lot on our plates, but it is going okay. Maybe you could say our first week on tours are our prep time.

Matt Wentworth: I think you might have meant how to get on Warped Tour, in which case is a lot of different circumstances. With that, that is meeting lots of bands, getting yourself out there and focusing on creating great music. And hopefully people who run Warped Tour and Kevin Lyman will notice and that’s really all I can say about that.

SR: Is your schedule generally this packed. Where you are on tour, a couple of days off, and then back out on tour?

TW: Generally Id say yes. I mean it is up to you as a band to set your own schedule. You don't have to tour that much, but I think it's always good to, especially doing Europe before as it gets everything set. Plus, you aren’t allowed to play in the states just before going on Warped, which totally makes sense, so doing Europe is a good way to kick it off. We love touring Europe as we have developed a great fan base there and this last tour was the longest one we've spent there. This time we got to play in Spain, Poland, Italy, we also got to go to Southeast Asia, which was really cool and extend what we normally would do on our European tour.


SR: How have you built your fan base over in Europe?

MW: I think it has been through YouTube. YouTube is huge over there, more so there I think at times than here. So, it helps a lot. We focus heavily on YouTube and post covers in between times, do videos to them and it really helps us in Europe, especially in Russia. We love our fans everywhere, but wow...Russia... they totally represent! It's an investment with the cost of airplane tickets and everything, it takes a lot of effort, but it has definitely been worth it.

SR: Every band has goals, what are some of yours?

TW: My typical answer to this is of course, to get more fans. How can we interact more with them. That would be a constant goal. As every band has goals. Some short-term, some long. But it's always changing too, because you never know what is coming your way as the music industry changes so quickly. Ultimately you just know where you want to be, and there are a million different paths to get there.

MW: There is no way to control what might happen. I mean right now is somewhere we wanted to be say (paused) two or three years after we started touring, but now it's been seven or eight, but whatever. It takes some bands longer than others, and all of it is totally worth it. As long as you're having fun.

SR: How does Our Last Night show the crowd that this is the band they want to come see?

TW: We always try to make ourselves available to our fans at shows, plus we try to use communication as much as possible on Instagram, Twitter, Facebook. It is all important.

MW: For me I think it starts too with the song-writing. Writing something our fans can relate to or be really into, I think that is an important part of building and helping people want to come see us. For me too that is the greatest part. 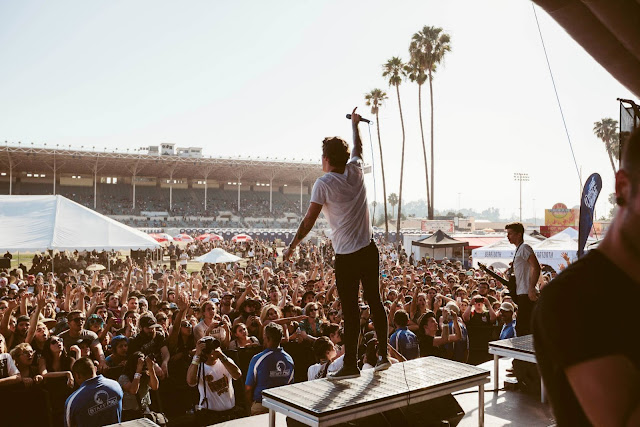 SR: Speaking of the song-writing how does that work in the band?

MW: This time I would say it was crazy (laughed). Like we had said our schedule is so tight, we only gave ourselves three months to write and record the album. We all do a lot of the writing, contributing, and we have a lot of friends outside the band that throw in too, and are really talented, it had to be a team effort this time because we had so little time to complete everything. Even during our European tour we were mixing and mastering on our tour bus in Europe. We do it all on our own, as we are independent. We aren’t on anyone else's schedule.

SR: If you could pick a song to describe how you're feeling about all this, what would it be?

MW: If I were going to pick one of our songs I would have to say, “Younger Dreams,” as it's always about remembering to stay young and not lose what you wanted to do.

TW: Kind of staying with those childhood dreams a bit.

MW: So, I think this is huge for us. As we've toured for years and we've always wanted to do the Warped Tour and we all are just looking at this as like WOW, this is all good! No matter what time you're playing or how hot it is, it is all good! It's the Warped Tour!

"Road To The Throne"