MUTEMATH Has Found Their NOW 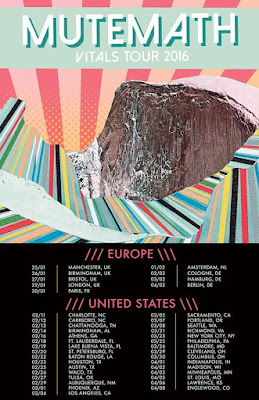 Song River: How are you Paul?

Paul Meany: Wonderful! It's beautiful outside!


SR: Well for all intensive purposes you should feel wonderful, I am looking at all MUTEMATH is creating, and wow!

PM: It almost feels like something deep and metaphorically going on right now, as I am talking to someone named Song, gosh, this has been the negotiation of my life... talking to songs.


SR: Really looking back over your entire life and your involvement with music, it really is. Songs are a part of who you are. There are some people who are just naturally born into their passion, it is who they are, and for you Paul music is your destiny.

As I was looking over your bio Paul, the word NOW, seemed to resonate several times.

PM: Absolutely. I feel like it's a mind game. I mind game of trying to remember what's important. You spend the better half of your life planning in this ambitious state, and its exciting. And now all of a sudden it feels like it slipped and there is more to look forward to. I am coming to terms with all of it. Nothing changes with how you’re supposed to keep your mind under control. Stay in the now, stay in the present doing the most with what you have right now.

PM: I am 39. I am making this last record in my 30's and it will be the last record I make in my 30's and it is important to me to do this. We've been a band for over ten years and we feel lucky to have done this. The hypothetical ending or literal ending and how we react to it as we keep moving forward to the next place.

PM: Hypothetical through our music as you listen. But we literally did think about whether this was going to be the end. In the band we have new fathers, me being one, thinking is it time to move on to a different thing. We weren't sure, we had to really go back and think about it.


SR: That is life in truth Paul, and I am sure you would agree it is about reinventing yourself.

PM: Certainly, I can see that. In the end though we resolved that we just needed to push harder. It was not our time to call it quits.  We still had a great record to make. We needed to figure it out and I am so glad we did. I really love how this album came out.


SR: Was there something in particular that happened, a pivotal moment, when you knew: move forward?

PM: Yes, it was a few songs that came into existence. One song was, “Used To” and the other was “Remain.” They both came about in late 2013. We had a ton of songs that we weren't excited about, except those two. In the New Year of 2014 we decided we were going to write a bunch of new songs, building from those two. Our relationship with Warner Bros had fallen apart, we parted ways with our manager and it was just us four guys. With the natural progression stretched out before us we decided to write a new song everyday in 2014. A new chapter for ourselves. Without the baggage. We began creating what is our new album, “Vitals.”


SR: Were “Used To” and “Remain” the heart and soul of what was vital really to your moving forward as MUTEMATH?

SR: Looking at your social media page your fans certainly seem excited for the new album.

PM: The reactions we've got the last few months, when we put out something out, for the most part have been positive. It so exciting to us. We are so happy with it, and it is really an exciting time for our band. We are trying to stay tempered, there are unknowns, as we don't know the global reactions of course, but we are very proud of what we have made.

What does “NOW” sound like? It took us awhile to figure it out, what NOW sounds like. Strangely enough after getting away from the making of the album a bit, “Vitals” bones remind me of our original way of how we made music. I am glad it happened.

PM: I would say no. Yes, we are involved in it, but we are hiring a team to do that. We are focused mainly on the set up for the tour and such. This next video I don't want to talk about too much, but it's going to be something completely different from anything we have done. I don't want to say too much else.

SR: When you are creating a video, are you more about a storyline or live footage?

PM: Our comfort zone is just visual gags. I think when we've messed with story-line it didn’t work out, but I think if we teamed up with the right people it's possible.

SR: As for the “visual gag” I liked the video you did recently on the Jimmy Kimmel show where your drummer is beating on old rubber garbage cans. Then in the same video you have a part where you jump up on the ledge of the building balcony and 'fall' into the waiting audience and stage set up below...
Paul did you come from a musical family?

PM: It was a musical family and a church going family. My dad was the worship leader where we grew up. I always idolized my dad and I wanted to be on one of the instruments they had set up and dad let me. Whatever instrument they needed me on I would try to learn. Then something happened...

PM: I learned that you could change-up chords. And I started spending hours and hours re-harmonizing songs and I was hooked.

SR: Sometime take the tune to “Gilligan's Island” and place it over the song “Amazing Grace.”

PM: Oh, as soon as we are done I am going to YouTube and doing that! (laughed). Actually “Amazing Grace” was the song I sang to audition for at a music school my senior year I went to. I remember I was going to try to channel my best Ray Charles... At the end of it the professor turned to me and said, “Someone wants to be Michael Bolton.” That was my first lesson in intention versus perception! (laughed).


SR: From that point how did the rest of the band come together?

PM: I met Darren King in 1997 and Roy Mitchell-Cardenas in 1996.
Way back when, I wound up in Springfield, Missouri interning for a music Evangelist. I did for him whatever needed to happen. I ended up doing a 10 week revival and met Darren at his church and he was about 14. We stayed in touch. Roy had gone off to law school and he came back around. He is one of the very best bass players.

PM: Well of course we did the odd jobs back then, but music has always been it. For Darren and I music had always been our life. We were just trying to figure out a way to navigate there. Roy had aspirations to get his degree, which he did, but he found out he didn't like law school. I called him and told him he was my favorite bass player and we came together.


SR: It really has been a song of verses. Now to add to all of this you have a little girl of your own. How old is she and does she show musical/art aspirations?

PM: It's really amazing watching your kid and figuring out what they are into. She is four years old. She loves to perform. I am thinking of putting her into piano lessons soon.


SR: Your life definitely has layers that have unfolded. With your music, your family and your new album. Your music speaks of longevity.

PM: Philosophically the record is the starting place and we see where we can build on that. There are so many variables. Embracing them, whether they go wrong or right during the only time they may happen, it is what we live for. Getting in a room with people and playing music. We want to put on a great show for people and whatever that entails visually and in what you hear, it is important to us. By spring we are out on tour, and our new album, “Vitals,” firing on all cylinders! It will be great!