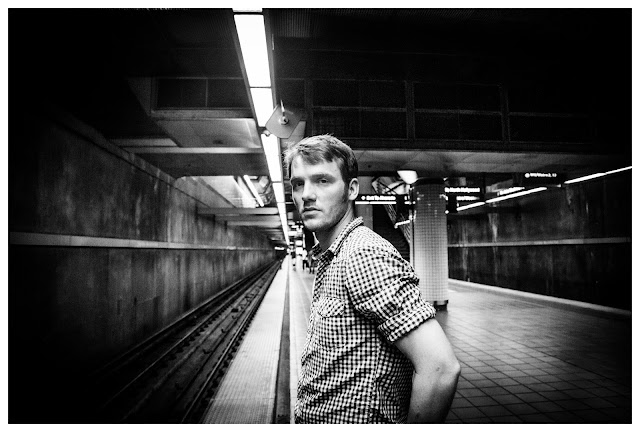 Music is the transcendentalist pulse of our lives as within each passing moment there is a complexity to it. Life brings her own nuances and our reaching out or in can create some of the most opportune moments to feel the rhythm, the beat.

As engineer/producer Reuben Hollebon decided it was time for his own solo project, he has created a spoken story of musical language called... life.

Song River: Hello Reuben, how are doing clear across the ocean?

Reuben Hollebon: Doing well. It is evening here and the cats are going a bit bonkers.

SR: As you settle in for a quiet evening and reading more about you Reuben, you seem to be a basic person, not complicated in your needs. Life doesn't need to be complex.

RH: No it doesn't. I think value can come through normal activities, life doesn't always have to be epic.
I would say though that the past six years of my life has been very much up and down. One moment, that's amazing... then....ah... life goes up and down. You learn to not take it all in, that is life.

SR:  In order to write, do these experiences have to come?

RH: No, not at all. We have the beautiful observation of life and stories and not have to suffer in order to connect art, music, poetry. There are enough things common in people. You can have an essay on the way you projected your suffering, you hear about their suffering, you can relate. I feel in the so called western world it pales in comparison to other times and other  places, not to say we don't run into things, but art doesn’t have to be dictated by such.

SR: As you step out into the world as a musician do you feel it is important to keep your privacy?

RH: I don’t think my music lends itself so much to that invasion. I think there is a certain level of respect for music. It isn’t like the Kardashians, it's not an interest to me to make my lifestyle so out there. Where I live is not that intriguing.

SR: It seems we are always looking to identify with or be a part of something.

RH: It certainly is possible. I think there is a locked in British and even European character that comes into play. Britain more so, as we are an island.  I think that is a certain character of patriotism. Everyone can choose to be a part of it.

SR: Your upbringing, how much of an influence was that?

RH: I think there were things as a child that you might not have found very endearing, but when you look back at it, it gives you a very strong sense of ethics.  With my family, we fostered many, many different children while I was growing up. In a four bedroom house, my brother and I shared with three or four other children. That sort of burden that gets put on a family gives you a different view of the world.
I am very happy with the morality I had gotten from it.

SR: Could your phrase the morality that you were given?

RH: I think it has to adapt, it can't be locked down succinctly.

SR: As I listen to your album, Terminal Nostalgia, it seems to have something there that you believe in as certain.

RH: Possibly. The album wasn’t an intent to preach, but more of an assessment.  Many social stories and only one love song. Multiple opinions on these events, to have personal discussions, there are so many gray areas on everything we are in.

SR: Deep thinkers and deep observers certainly don't see the world in black and white.
How has the transition been for you from recording engineer and stepping out to do this solo music project?

RH: There was some undermining negativity coming from people.  Some groups were like no your engineer stay there, be a producer... whereas other people were like great go for it.  I had to meet it all somewhere in the middle. As I have learned much in assisting other people with their projects. It was an accidental coming to doing this album of sorts, no box, no rules.

SR: Do you feel with your music you can tour with it?

RH: I would love to.  I have this conflict. When I play my music in its correct form it's very fundamental, mediation so as I go through the processes and sit and meditate on stage either on my own or with other musicians it is quite scary. I find myself afraid of the idea but I am thrilled too.  I think what I want to do is make it an invitation and not a performance as I do this.

SR: The percussion bits within the album remind me of influences from Africa.

RH: I think there are many influences, but I do spend a bit of time listening to African music, along with South Asia, Thai, etc... world music, which is a terrible term I think, but even on one of the tracks there is a bit of reggae. I think most of it is subconsciously brought forth.  I like the percussion to be a bit of jarring at times.

SR: How was it working with Emma Rozanski  on creating your video for the song, “Faces”?

RH: I told her if she wanted to make a piece of art and interpret on the “Faces” song she could and she did beautifully. Her interpenetration was completely different from mine.

SR: How about the song “Common Table?”

RH: The video is actually a little bit more related to the song itself. The Aristotle, I am not that well read just know a few things about him, but he believed we would all be better as people if we held dinner together.  The most common thing we all share is that we will all die, that is beyond anything else in the world. It is the thing we have the most common thing over in religion and are afraid of.
In this song, it is about all of us meeting up in the afterlife. That doesn’t deny divinity, I thought there was no better way than to round off a collection of stories.

SR: Who would you like to sit down with at that communal table?

RH: Rather flippant I said to someone else recently I'd like to sit down with Winnie the Pooh and all his friends. (laughed) I think sticking to the point, after we've gone there is not the time to not be with anyone. I wouldn’t want to restrict anyone.

SR: There is always something to learn from somebody.  Who created the bits of artwork you have used with the music and presentation?

RH: That was my former partner. She was there through all of this creation. Her work all fits so well with what was created.

SR: Are you two still friends?

SR: As these last six years have led you to this moment, Reuben, where do you want to go?

RH: There are several roads I am curious about. Living in contentment, fulfillment in music. I love working with wood, and maybe learning to ride a fast motorbike. Maybe being somewhat better in meeting someone in the first ten seconds. There's a very vast difference even in language... yet we speak the same language. There is a lot to learn.