Interview with Hanna Brewer of the Punk Rock Band: Purple 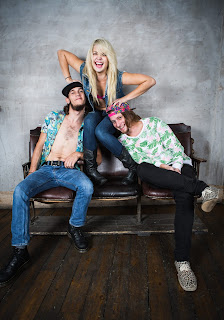 The object of Purple comes from the heart of a Texas Hold em... you're dealt two cards face down. The round to check, bet or fold comes and somewhere between a fortuitous mission of punk, rock, and filling your ears with the rambunctious sounds of screams, drums, and poker chips flying you find the winning sounds when Purple music begins.

Straight up out of Texas, the undeniable female force of whom Purple is leaps it's uncanny feminine force upon you through vocalist and drummer Hanna Brewer. Purple has brought you their killer urban punk attitude since 2009 and is continuing to get out and support their new album Bodacious. And believe me everything about Purple is... BODACIOUS!

Song River: Hanna, isn't it within the American spirit, even the Texas hold-em to not really care if you fit into anybody's box musically, physically, mentally, spiritually, ecumenically, grammatically, hermetically?

Hanna Brewer: Yeah. I would say that is just individual human's spirit. I don’t know how to play Texas Hold Em, but EVERYBODY expects you to fit into some type of box. That’s just how people are.

SR: The new album Bodacious, really is that ripe juicy cherry about to pop isn't it?

HB: I guess so. Sounds kinda sexual. I’m digging it.

SR: A collection of 12 tracks- each holding their own. Did each song individually come naturally, would you say even organically?

HB: Yes, it just comes naturally. We didn’t think too hard about anything when we made this album, so yes… pretty organic.

SR: Before I read someone else's description of you, I immediately felt a connection to early Red Hot Chili Peppers. Sure you can hear someone comparing the vocal sound of Hanna to Gwen Stefani, but hell-a girl you are your own.

HB: Yeah. I mean...I grew up in the 90s and of course that influenced me. People always say I’m ripping off Gwen Stefani…. but man, she doesn't play drums or scream her ass off or puke on stage.


SR: I am not touching your hometown... sorry... it's been beaten already. If you want to yak on it, feel free, otherwise, hey it's Texas and it fueled your vision.

HB: Yeah. There’s good and bad and of course, everyone’s surroundings influence them.

SR: When you check out band’s music, do you listen to it without preconceptions or do you study up on them before giving them a chance?

HB: I just listen to it. This isn’t college! (laughed)

SR: Would you say Bodacious in some ways is a continuation of 409?

HB: I feel like they are two totally separate things. We had a new bass player and producer.

SR: Your style cannot be defined, yet it is distinct. You sense the crazy magnitude of what you bring when you listen to what comes out of a box... what are the elements of kick-ace live, as rumors fly it is intense. 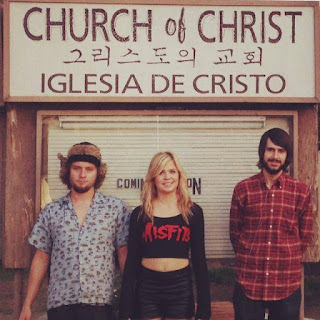 HB: Yes. very intense. I usually always feel like I’m gonna throw up because we play as hard as we can. and singing on top of that… it's  a lot. We're always soaked with sweat after a show. Sorry, if what I just described to you sounds disgusting but that’s real. (laughed)

SR: Notable or noteworthy antics that are markedly Purple on stage?

HB: Oh, of course, a girl drummer that sing, scream, be a tomboy and feminine all at the same time.

SR: Hanna, it is sensed that you are naturally who you are.

HB: (Laughed) Yes, that’s me! I’m pretty wild. I used to hang with my dad a lot and he taught me everything I know.
We are pretty simple. we just get wild falling all over the stage sweating our asses off.

SR: Hanna, were you the child your parents worried about, or did they pretty much urge you to be you and guide along the way?

HB: I'mmmmmm… kinda both. They always encouraged me but I used to get in a lot of trouble as a teenager. I’m lucky I didn’t die. (laughed)

SR: Who were some of your heroes in music, literature, fashion, entertainment that you looked up to growing up, Hanna?

HB: Music: Jellyfish, Spice Girls, Nirvana, No Doubt, 2pac, RHCP, Kings of Leon….. so much more. Literature: Any kinda musical biography or autobiography. Fashion: I’ve gone through a lot of phases… sadly Avril Lavigne… I used to wear ties in 6th grade and then I had the whole skater punk ego thing going on for a while. But overall… I don’t really have fashion sense and mostly just wear band t-shirts I get from touring. Entertainment: Dave Chapelle, The Office.


SR: Has the world of rock been steadily opening itself up to girls being as much a part of the industry and quite capable of holding their own as of recent? We certainly are hearing more and more phenomenal female drummers.

HB: I think women are just realizing more and more every day that we can do whatever the hell we want. 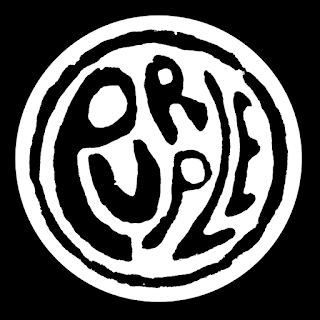 SR: Bandmate, (guitarist/vocalist) Taylor Busby, certainly bring the reggae heavily in. Now reggae can be as varied as any other genre. Marked courses fall from the So-Cal to the Marley, over to the UK Jungle... what and where does your sound originate from?

HB: Taylor isn’t here right at the moment… but I can tell you he used to be in a reggae/ punk band called The Shammies. He loves Bob Marley, Alton Ellis, King Tubby… he likes a lot of old school dub.

SR: Are those influences a part of your natural state of being or is it just the music in of itself?

HB: Speaking of Taylor, I think he really feels reggae and it's part of his natural state.

SR: Listening to the vocals and guitar style of Taylor he comes across as being very casual and at ease. Is this a misnomer?

HB: Taylor is an intense person. He can’t sit still and always has to be working on something or partying.
He makes his own guitar pedals. IG is @Busbyelectronics.

SR: Take the album 409, and your latest Bodacious. Where do they line up in the music store section under?

HB: Everybody usually just puts us in “punk rock.”

SR: BTW I am thinking your music needs to be heard on vinyl... a music stream may just be too pristine.

SR: Simple songs, simple lyrics, simple titles... you are really just out to create Purple and as much as you can for as long as you can aren't you?

HB: Yeah as long as we are feeling it we will keep writing music.

SR: You are handed the proverbial golden pen to create the lineup you want to be a part of playing at a three-day festival. First, who are your bands (you can have up to 15 why not, it's your world), where would it be held, and what food munchies trucks must be in attendance to eat from? 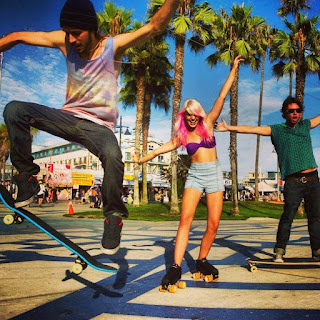