MAINLAND: BAEBLE NEXT SESSION
WATCH IT NOW ONLY WITH BAEBLE MUSIC 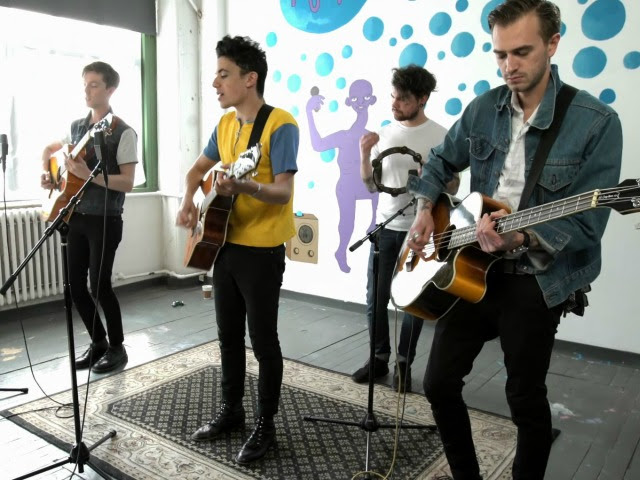 NYC-based indie rockers Mainland have been on a steady rise lately. Their most recent EP Outcast has been garnering them some much deserved attention and praise, with its cool mix of the sleek West Coast sound with East Coast garage rock and post-punk. Their most recent single, "Beggars," is an absolute floor stomper and a solid anthem for folks who are out to take on the world and get shit done. All of these reasons is why Baeble was psyched to have Mainland perform a few unplugged versions of their most recent work right here at their headquarters in Sunset Park!
The band broke out the acoustic guitars, shakers, and tambourines and played a couple songs off Outcast, like the somber-yet- optimistic title track and singer/guitarist Jordan Topf's loving tribute to his father, "A Bit Out Of Time," along with their new single "Beggars." The studio versions of the songs are already great to begin with, but hearing them in a new, stripped-down lens will only make you further appreciate the band's knack for lyricism and putting together a damn good tune. In between songs, the band talked about how each song came about, the songwriting process in general, and the joy of playing unplugged whenever they can. With their clever lyrics and undeniably feel-good sound even when discussing heavy topics, Mainland is only going up from here, and you'll definitely want to join the ride and watch them hit the big-time.
Mainland duck into Baeble HQ and give the crew a few unplugged versions of West Coast styling meets East Coast post punk. View the session here or via the Baeble Music app. To learn more about Mainland, visit: http://www.mainlandnyc.com/
Follow Baeble Music on social media to keep updated with all their new content:
www.facebook.com/Baeblemusic/
https://twitter.com/BaebleMusic
www.instagram.com/baeblemusic/
BANGS! Mainland BAEBLE Next Session