CRUEL HAND ON TOUR THIS FALL

August 25, 2016
CRUEL HAND
ON TOUR THIS FALL WITH
ETERNAL SLEEP & WILL TO DIE
NEW ALBUM
YOUR WORLD WON'T LISTEN
TO BE RELEASED SEPTEMBER 9 ON
HOPELESS RECORDS 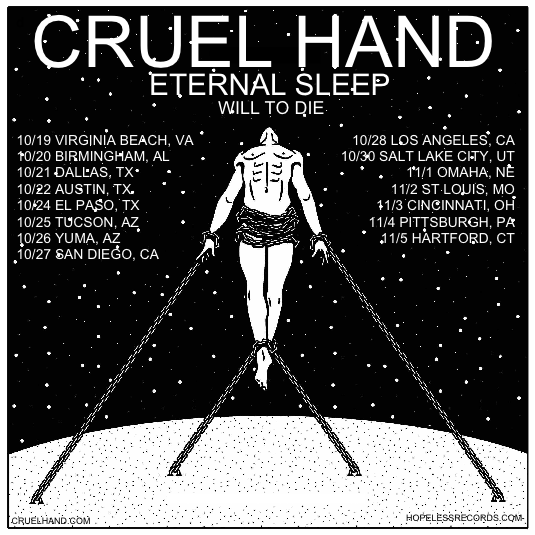 NOW AVAILABLE FOR PRE-ORDER
August 23rd - Portland, ME - American hardcore punk band, Cruel Hand, have announced a fall tour with Eternal Sleep and Will To Die! The tour kicks off on October 19th in Virginia Beach, VA and will wrap up on November 4th in Pittsburgh, PA! Tickets go on sale this Friday, August 26th at the band's website.

The band is currently gearing up for the release of their new full-length album, Your World Won't Listen that is set to drop onSeptember 9, 2016 on Hopeless Records.
Cruel Hand recently released a brand new video for their song "Decompose". The video was shot while the band was on their way to Warped Tour this summer. Fans can watch the video now on the Hopeless Records official YouTube channel, here:
https://goo.gl/VCgrx0

Since forming in 2006, Cruel Hand's sound is equal parts New York hardcore and west coast thrash, all with a twist of their own. The band has toured the globe relentlessly, sharing stages with bands like Terror, H20, Balance and Composure, Title Fight and many more.