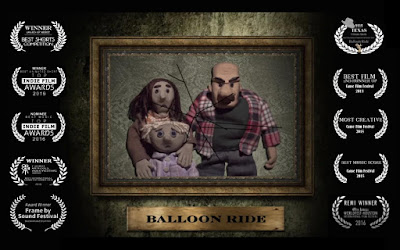 JP: Did you create this using stop motion claymation or what?

Evan Hughes: This film was created using stop motion. Lois Conlan was the character creator for my film. For the characters, she used clay heads, hands and feet which were later cooked and set on a wireframe body which were padded out and finally covered in clothing material.

JP: Such a heavy topic, why this topic in particular?

Evan Hughes: I fortunately had a happy childhood and the thought of victims especially children living in fear concerns me. Family violence is happening everywhere all over the world, and I feel  the more this subject it is spoken about and put out in the open, will empower victims to speak up  and let it be known that they won't stand for it anymore.

JP: Has anyone ever come up to you after watching this film and said they could relate to it?

Evan Hughes: Yes. A friend of mine told me after she and her mother watched it, her mother had been abused by her father when she was a child. I asked my friend if the film offended her mother, she replied her mother loved the power of the film and that it sent a strong message to the audience. She felt the abruptness of the film is what is needed to get the message through.

JP: Overall what has been the reaction to the film, "Balloon Ride?"

Evan Hughes: Balloon Ride has had many mixed reactions. When I have seen it at festivals, I've noticed that majority of the audience do not know whether to applaud or not at the end of the film. Shortstop International Film Festival wrote a great review on the film and it has won numerous awards which is terrific. But it also has been denied by many festivals with one local festival quoting "the film is too dark for our festival". In my opinion that's film, and the great thing about it is that people have a say in what they like and don't like, everybody is different.

JP: It isn't a film that brings much hope, almost at times felt like a nightmare.

Evan Hughes: It definitely isn't a feel good film, but I wanted it to be a realistic narrative which tells the truth about Domestic Violence. In these situations there are no happy endings and people are living in a nightmare.

JP: Have you always used film as a way of telling others what is in your mind and heart?

Evan Hughes: Since a child, I have loved to create things using my imagination and I have always enjoyed films. I enjoy telling stories and projecting them on film is satisfying.

JP: Do you do other types of film making?

Evan Hughes: I have actually just finished my second short film which is very different from Balloon Ride. It's a live action, zombie horror film based inside a hotel cellar.

JP: What is it you really want the audience to take away from this film?

Evan Hughes: I want the audience to feel emotional about the subject and understand the terrible affects and negative outcomes of domestic violence.

JP: Why did you  enter this film in particular to Frame X Sound Fest and where else has it been seen?

Evan Hughes: I found your festival on Filmfreeway. I liked the fact that it is an online film festival which allows me to share my film with the rest of the world. The Cause Film Festival (Sydney) was one of my first screenings which had a brilliant fundraising scheme. My film was also screened at a few more social change festivals including Bare Bones International Film Festival and Show Me Justice Film festival.

Link to review from Shortstop - http://www.shortstopfest.com/#!balloon-ride-review/beqqp