Eyes Eat Suns is an American alternative rock band from Raleigh, NC. Their first EP, “POW!” came out in 2015 and was quickly followed up by their next EP, “Alive” in June of this year. The albums first single, “Priceless Faces” is out now on iTunes.Catch Eyes Eat Suns out on tour! 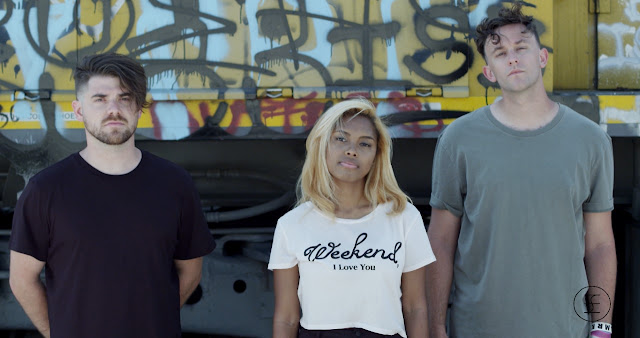 Song River: Looking back to the beginning of Eyes Eat Suns- there has to have been a catalyst that lead you to this artist outlet, what was it?

Ayisa Adderley: Attending Warped Tour for the first time was definitely the catalyst for EES. I had already been writing and performing, but this experience definitely inspired me to make necessary changes.

Song River: In those earlier days where did your source of encouragement come from to keep the  music dream alive?

Ayisa Adderley: I sourced it mostly from my inner demons. I was unhappy working 60-70 hours a week in a retail store, where the days were always the same. I was unhappy sitting at a desk listening to professors talk to me about people who were outside those walls living their lives. I wanted to be the person the professor was talking about, I wanted to be outside of those walls experiencing my life and I knew (with music) I could do that.

Song River: Therapy comes in many forms. Music certainly has had a huge influence over society since the beginning of humankind. How has music changed or developed you as individuals?

Ayisa Adderley: It helps with reflection. If something happens, I write a song. It's a good way of dealing with emotions you would otherwise be afraid to deal with.


Song River: Use this platform to those who haven't heard you yet, who you are, why your sound is something they not only need, but want.

Ayisa Adderley: I would say it's just artists trying to share our stories in the hopes of helping someone else deal with their own demons in life. If we help at least one person, then that's all we could really ask for.

Song River: What have been some of the connections you all have made through your music to friends, family and fans?Ayisa Adderley: Family has always been there. Friends come and go, the fans grow. It's a roller coaster. But, we have made some really cool connections throughout the process and have made some of the best friends I couldn't have met otherwise.

Song River: Your first EP, "POW!" was released in 2015. Who did you all work with on its production and recording?

Ayisa Adderley: For the most part it was self produced, but we did work with a sound engineer, Sid, who lived in NC at the time.

Song River: In June of this year, you worked with producer James Paul Wisner to create your second studio EP, "Alive." How was it working with him?

Ayisa Adderley: it was great! He definitely helped shape the sound and helped us achieve what it was we wanted out of the EP, if not exceed those expectations.

Song River: With the release of your single, 'Priceless Faces' off your sophomore EP, talk about the process of choosing this as your first single, and the filming/production side of the song.

Ayisa Adderley: We wanted to lead with the most lighthearted of the tracks. It's fun and upbeat and it's a good transition song---from the old stuff to the new. It's a song about life and trying to figure it out. We filmed with Jonathan Ho, Director. He helped shape the vision of the video; keeping it very candid and keeping all the focus on the artist trying to figure out life.

Song River: DIY is this generations born and bred mantra. Is independence truly valuable in maintaining one's own sense of self worth?

Ayisa Adderley: Independence is cool but being a DIY band is not easy, though a lot of people can do it, It's hard to do it well. And when you remember that it's hard to do it well, you can lose sight of yourself. You have to really want something and have a vision in order to maintain self worth. Independence is nice, but if you don't have an idea of your own self worth going into it, then once you lose your independence, then you lose that too.

Song River: With festivals like Warped Tour, Weenie Roast and working just recently in having a bit in the video for To Write Love On Her Arms during suicide awareness month this past September it is obvious you've a tenacious desire to live your dreams.  First, if you were to sum up this ride since 2013 how would you?  Next, for those young bands still talking about what it is they want to create and what they want to do... what would you tell them?

Ayisa Adderley : If I could sum up the ride I would say it had a lot of lows and highs and it was both exhilarating and nauseating in a good way. My advice to anyone who wants to pursue the same path: Work hard and become exponential at time management. Be 30 steps ahead always. Be kind, be honest. Don't forget to breathe and don't forget to make time to de-stress!