Finishing out a world tour, coming in off of Warped Tour and heading back out in the spring of 2017 over to the UK this band from Averill Park, New York known as State Champs has proven over and over again they are more than just state... they are World Champs!  Coming in with 3-Eps and 2 full-length albums, State Champs bassist Ryan Graham sat down with us recently. New album coming soon, and the process of producing a State Champs video- it's all looking great! 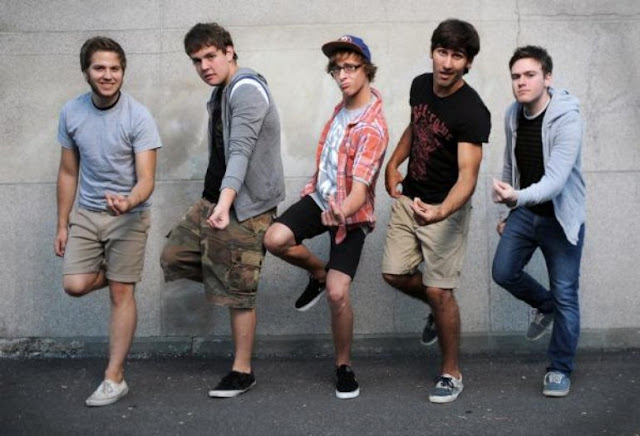 Song River/OM: Hey Ryan! Thanks for hanging out with us.

Ryan Graham (bassist for State Champs): Thank you for giving us the time!

Song River/OM: In the line of the sound known as, "Pop Punk" State Champs has really taken-off these past couple of years. What has been your perspective on that?

Ryan Graham: It's cool. I dunno a lot of people were saying that Pop Punk was dead for a long time but I don’t I ever really believed that. It's always going to be here, maybe not as big, but music always comes in waves. That’s what I listened to when I was 15 and 16.

As far as our trajectory over the last couple of years, we had done a Pop tour back in early 2014 and that was the first time we had ever played with Pop bands instead of Pop Punk and we realized then we had kind of a different following.

We then did Warped tour in 2014 and it really helped us to realize there is something bigger for us that can happen. Since then we have got to see the growth quite a bit and it's been really exciting and really fun. Not necessarily expected but hey at this point we will take whatever we can get! (laughed)

Song River/OM: Have you been documenting a lot of it?

Ryan Graham: Yes, we are actually shooting a DVD right now. I don't know when it's coming out or what all will be on it but we have been filming for that for about a year so we have our film guy out, Elliot, who has been documenting it as well. I am just as excited to see it as you guys are!

Song River/OM: Is it going to be a combination of behind the scenes as well as live performances as well?

Ryan Graham: We have live performances, video, behind the scenes off the world tour we just finished. You know as a band we are really creative, we  created our own TV series, and on the recent Warped we created another one called, Breakfast With Champs.

Working on the creative side has been a little slower but now that we have finished up Warped Tour you can expect to see a lot more stuff from us.

Song River/OM: Do you all liked to be involved in the process of what you’re making as much as possible?

Ryan Graham: Yes, all of us want to be involved. We are all so creative. Sometimes it might seem like we are going to butt heads on this because we aren't going to always agree. But it's nice that everyone cares enough to create together.

Song River/OM: How much writing have you all managed to get done while out on the road?

Ryan Graham: We actually wrote the entire last album pretty much while out on the road. We had the beginnings and the shells of our songs and then of course tweaked them once we got home. This time though we just wanted to enjoy Warped and then when we get home we can designate time to create and not feel all those pressures. There’s so much going on during a Warped Tour.

We are going to go home after some European Festivals and get going.

Ryan Graham: (smiled) It's so crazy! Playing abroad and doing really well is just so fun to see how music breaks down barriers. Especially language barriers. We are getting to do what we love to do and meet people and see these cool places.

Song River/OM: When you are involved in a lineup of bands performing. What do you do you think is a good number?

Ryan Graham: I think three bands together as a line-up is a good number. Headliner, direct support and another band. Or even have a local on there once in awhile. To me the more thought out and concise a show can be the better.

I think too it's great when you can headline your own show and maybe invite other bands that maybe not so many others have heard about. Then the fans that come get to find another band that they are really into. (laughed) Now come to think of it I guess I am kind of torn... I mean... I like a short well organized show, but I still like having more on the line-up and having my friends on to play too and boost their career.

Song River/OM: It helps show the collaboration between bands too. Do you feel that Warped this year had been more personal this for you all?

Ryan Graham: It was so great doing the meet and greets and the interaction. I think this year though we saw more new faces, it was cool though to look out and see some of our fans that we recognize as they had been at multiple shows. We love hanging out with our fans, they are so important to us.

Song River/OM: You have mentioned how important the creativity is to you, how much does that spill over into the designing of your merch and album covers?

Ryan Graham: Derek Discanio (lead vocals) has done some designing on our T-shirts and fliers. It's important to us that it all flows and it looks good together. I think we do a pretty good job. We have an idea for our new record and we all had input on it. It might be a bit different than what we originally intended, but it's a reflection of all of us at the end. With five voices along with management and a label everyone can come down to an agreement.

Song River/OM: Ryan what is your go to thing for space when you’re out on the road?

Ryan Graham: I like to take walks. Not just go to the foodie places, but go and explore the area. Doing stuff for me on my own time. That gives me that head space. I also like to read. We all seem to have our own ways of getting that 'rest.'

Song River/OM: Thank you Ryan for chatting with us. Tell us the best way to stay in the know for State Champs.

Ryan Graham: I would say... hold on... just to make this clear, (pulls out phone), our Instagram is StateChampsny and our Twitter is State_Champs. So yeah, follow us either place we are pretty corny and silly on the internet. It's a lot of fun.