Currently out on tour with Slipknot and Marilyn Manson the metalcore/nu metal band out of Orange, California known as Of Mice & Men opened up the storm raging evening filled with hard rain, lightening strikes and huge walls of dust blowing in over the Phoenix Valley and rooting itself in rage upon the performers event stationed at the Ak-Chin Pavilion where everyone in attendance knew it was bound to be
an interesting night for music.

The arena was packed from the pit, to the seats and up on the general admittance area affectionately known as, "the lawn." T-shirts from the merch booths were flying out so quickly that when a person walked by you one moment they would have on a regular street type T-shirt and then upon their next run by you would be wearing Of Mice & Men T-shirt, then fifteen minutes later they would have on a Slipknot T-shirt... it was rock n roll fashion runway at its finest and the merchandise people
were all to happy to oblige!

Finally, the audience settled in with their solo cups or cans of adult beverage, their new merchandise upon their bodies and the lights went down... with a quick thrust of guitar mania the stage lights lit up the night and all of the darkness scattered as, "We fear you, now do your thing." 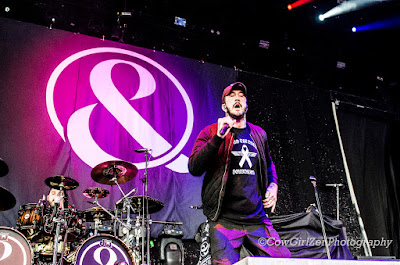 Of Mice & Men careened into their unabashed set of older tunes and only one off their new album, Cold War due out in September.  Austin Carlile, lead vocalist, who recently had undergone surgery for his condition-  Marfan syndrome- had his leg in a Velcro brace support and seemed rather tired.  Of course any type of surgery recuperation takes a while and possibly between traveling and the heat of Arizona he really was just tired. Nonetheless it did not deter he or his fans from delving in immediately to create some much needed Of Mice & Men metal love.

Opening with, "Public Service Announcement" OMM sprang open the jubilee of anticipation to their fans and the crowd's appetite for the evening had begun to be satiated enormously. In what seemed to be a very short seven track set, OMM raised the crowd as they played "Bones Exposed" Austin called out to the pit, "all the way in the back to up here- let's get those circle pits running!" Performing only one song that night off their new album, "Pain" and it seemed what Austin could give... was given. A set all too short but a crowd that packed in the meaty punch OMM delivered with appreciation. 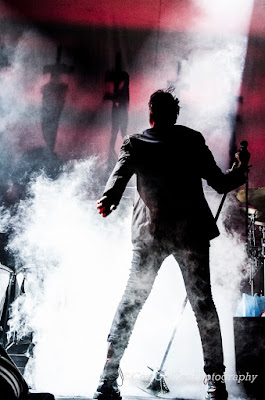 It was time for the man who presents himself to be the "antichrist" Marilyn Manson stood with his back to the audience behind a lit curtain with his arms spread eagled and his silhouette of his own mind's projection in sort of a halfway
effort came through as he dropped the mic and regained his position again.

The curtain opened and Manson in full force took command of HIS stage.  In truth if you have never witnessed a presence quite so domineering in force then you have
not been to a Manson concert. At 47 years of age Manson still takes those bits of nuances and creates a monster in a suit exceptionally well as he opened up his set with Rhianna's song, "Bitch Better Have My Money." Manson's stage theatrics
some find a bit overt and stirringly drastic. Yet his proclamation last night to the audience was, "I'm just so glad I made it stop raining." Aaaaaa perhaps, or you scared it into submission.

Either way Manson fans were given what they came for and in between each number during his set he took long pauses off side stage, leaving many fans speculating that he was doing drugs between songs. The tune, "The Dope Show" escalated the frenzied fans and carried the evening of Gothic type horror metal in the layered theatrics clear til the end of the set.  Leaching the blood bath with his final recoil the tune, "The Beautiful People." 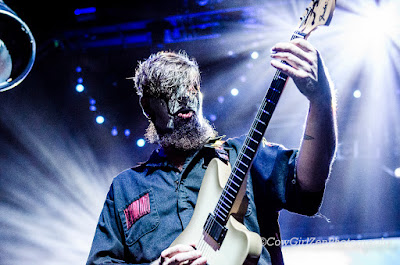 Slipknot has nefariously slipped the noose around every metal-head fan and reeled them in unto submission. If you are not a metal-head after a Slipknot indoctrination then there is not hope for you. This nine piece sonically charged band who had to reschedule
earlier this year due to Corey Taylor's surgery, was not about to let a little lightening, wind, thunder and deluge of rain that left the crowd drenched, and covered in mud stop them from coming to Phoenix, AZ. to do what Slipknot does best... play metal.

Screeching and opening their set of seventeen carefully carved out of your deepest nightmares with, "The Negative One" and the wet crowd having waited not only for the rescheduling of the show but a show almost stopped several times on account weather... elated with metal madness!

Recently during an open forum published on Blabbermouth.net Corey relayed that he was never going to, "play it safe" with regards to speaking his opinions and how he sees things.  A mouthpiece that is open and honest about what they view the world as in a way is what their fans really relate to when it comes to Slipknot and their music. Their fans are looking for honesty and they have found through the music of bands such as Slipknot their own voices in a way are being heard as well. Like it or not...calling it as he sees it, is a game changer in an industry that sometimes wants everyone to just sing nice or say nice things. Truth is... life is not always 'nice.' And someone needs to call that out.

It was hard to fathom it has been 17 years since Slipknot first played in Arizona but here this grotesque masked bunch of what still looks like Mad Max meets a Steampunk'd derision of Lord of the Rings Trolls... or something like that. So many of their songs
pierced the night sky and prevailed over the enormously eager crowd, songs like: "Skeptic," "Killpop," "The Heretic Anthem," "Pulse of the Maggots," and ending with "Spit It Out" it was a massive deluge of a full evening of metal slots being projected and forged into the
metal soul.  A spectacular ghoulish feast of metal.