"As Lions' melodic roar - thanks to the awesome pipes of Austin Dickinson - show us they're a red-hot metal band waiting to maul everyone in their path"
--Kerrang! Magazine

(NEW YORK, NY, September 30, 2016) — UK rock outfit AS LIONS announce their debut EP AFTERMATH, out October 14 via Better Noise Records. The EP will be available digitally in the US and physically in Europe. Physical copies of Aftermath will also be available for purchase on their upcoming US arena tour with Five Finger Death Punch, Shinedown, and Sixx:A.M.—tour routing enclosed.

In conjunction with the announcement of the EP, the band unveils the title track and first single “Aftermath.”

The EP’s four dynamic tracks are a study in contrasts, mixing thick, grinding riffs and rhythms with majestically sweeping strings, stately piano tinklings and a hefty dose of atmospheric electronics, all shot through with Dickinson’s soaring vocals and introspective lyrics. “Aftermath,” has vocalist, Austin Dickinson asking: “What have we created / what have we become?” as guitars churn and crash around him. “Conceptually it's about trying to navigate your way out of disaster, be it personal, collective, or in the case of the video, a war zone,” says Dickinson. Another track, the crushing “Deathless,” targets internet culture’s obsession with image—full track listing below.

Comprised of Austin Dickinson, guitarist and keyboardist Conor O’Keefe, guitarist Will Homer, bassist Stefan Whiting and drummer Dave Fee, As Lions are the evolution of British Rock. Standing by their mission to create “the biggest, baddest hard rock we could, and on an almost cinematic scale,” the band has worked with award-winning producer David Bendeth (Of Mice & Men, Paramore, Bring Me The Horizon) and Kane Churko (Five Finger Death Punch, Disturbed, In This Moment). The band has played to sold out shows in their native England, performing with metal/rock pioneers, Trivium, and making UK festival appearances this past summer at Camden Rocks and Download. As Lions are now gearing up to bring Aftermath and their explosive live show to the US during their arena tour with Five Finger Death Punch, Shinedown, and Sixx:A.M., kicking off October 18 in Little Rock, Arkansas. For more information on As Lions, the EP, and tour dates, visit: http://aslionsband.com/. 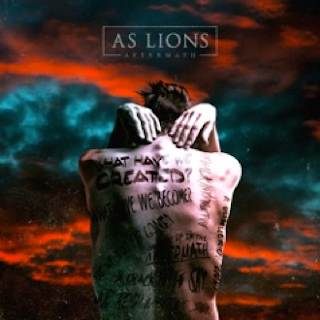