With a band name coming from the beloved 80's movie, The Goonies, Chunk! No, Captain Chunk spun their french impressionistic print of pop punk mixes with bursting ferocity filled engines of octane madness, crazy catchy pop punk melodies and full throttle powerful hardcore rock that shakes the venues support beams and makes their fans go crazy. This is dynamite in rock n roll form and Chunk! No, Captain Chunk! brought their wave loud and proud to the Warped Tour this year.


Claiming that their music is somewhat “bio-polar” in its multiple facets Chunk! No, Captain Chunk! Are now back home in Paris, but as all excellent bands who love their fans do... they quickly gave their fans a gift upon their return home. The single, "Blame It On This Song" available on Apple Music (http://smarturl.it/blameitonthissong). 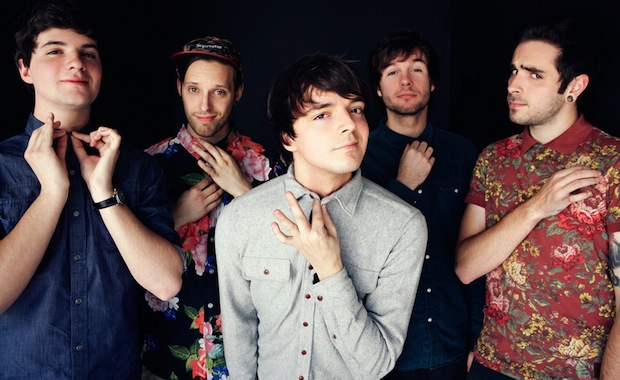 OM: Being a band from another country, let alone the other side of the world, how was Warped Tour for Chunk! No, Captain Chunk! ?

BP: It was absolutely incredible. Like you said, being from France, it has been difficult to make it in the U.S. as a whole, but being a part of Warped Tour was a huge success for us and an ultimate dream for a band like us playing the type of music that we do.


OM: What would you think of Warped Tour making it over to France?

BP: [laughed] You know what, I believe that did happen one year. I don’t remember which year specifically, but I remember them doing a whole tour around Europe and they had a stop in France at a very nice venue.


OM: Do you think Warped Tour should do it again and make a stop in France?

BP: Oh, I wish. But I think it wouldn’t do so well as France isn’t as into rock music. If it were to happen again though, I believe it would have to be something small unfortunately.


OM: What’s been some of the differences you have noticed playing all over the world?

BP: Every country is certainly different. When it comes to touring, I prefer the countries where it doesn’t necessarily feel like home. For example, Japan. It is one of my favorite countries to tour because it is almost like being on another planet. It is so insane. Everything you experience is so different from the next, and I really enjoy that.

The funny thing about touring all these different countries - not necessarily funny as in hilarious, but more of interesting - is that they are all singing the same lyrics no matter the native language that may be spoken. And it seems to be even more funny when we are performing and we’re not even English, but we are singing in English and the crowd, who sometimes don’t even know English, are singing in English with us. But we still all understand each other through the music. It’s such an odd, yet extremely cool connection. Plus, our band is really about having fun, having parties, y’know.


OM: You had mentioned that France isn’t exactly into the rock music scene. What had influenced you and the band then to make Chunk! No, Captain Chunk!?

BP: We actually grew up with American bands. Even if there was no promotion for it at home, we would always find a way to listen to it. Especially with the internet; we would have our MySpace accounts and would check out all these bands out there.

Actually, I remember buying the live DVD of Warped Tour 2003 and it was so exciting to see something like that distributed in France.


OM: Playing Warped Tour was definitely a dream come true then, wasn’t it?

BP: Oh, absolutely. If someone were to tell me that we would be playing on it a couple years ago, there is no way I would have believed it. Even today, it still feels unreal that we did it.


OM: What would you say is the next step for Chunk! No, Captain Chunk!?

BP: You know, that’s actually a really good question that stumps me because when you are playing Warped Tour, I believe it really does feel like an incredible accomplishment. And there are definitely more ways to get bigger and make more money, but that’s not the dream for us. For me, my dream doesn’t necessarily care about how big of an audience we have or how much money we make. Just being able to perform and share our music alone is absolutely insane.

I wish more musicians would think that way. I couldn’t tell you anybody specifically, but it does feel like that there are some bands out there who take it a little too seriously and they end missing out on the fun in touring and playing music.


OM: Is there still one place you would like to go?

BP: As a band, we really have been pretty much everywhere. I know we have already done like three tours over in Japan, but I would love to go back there again. Malaysia, Thailand, and the Philippines would also be amazing to go back to.
Wherever we go though, whether it is somewhere new or we are just re-visiting, I would really like to have more time to visit and explore.


OM: What is one thing you enjoy doing while out on tour?

BP: I like having some quiet time actually. I really enjoy having a quiet, kind of separate from people, environment. In some ways, it helps me to write songs and then it’s also just a good overall break for me to have every once in awhile.