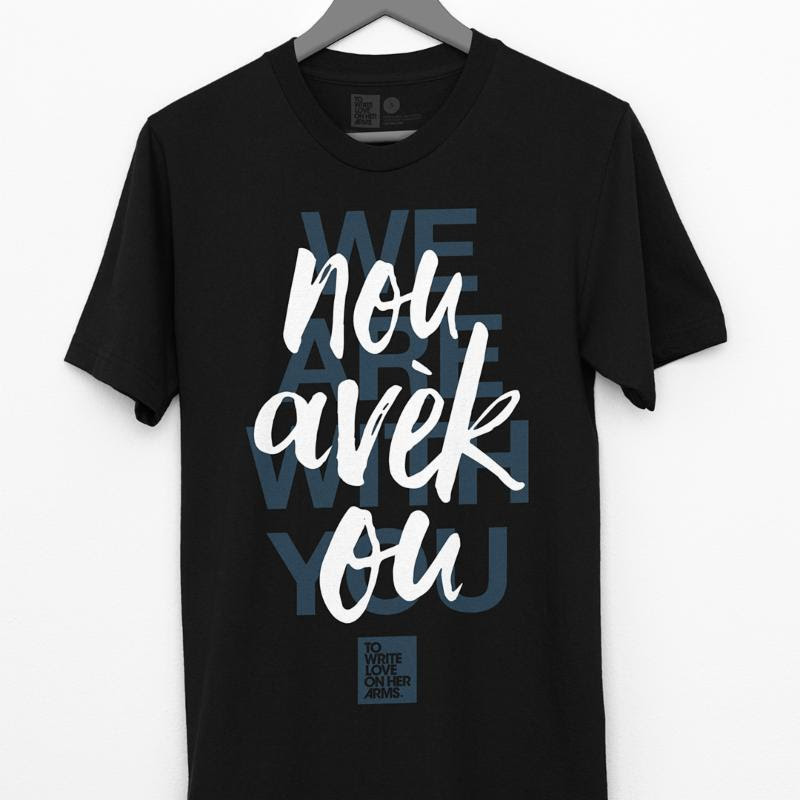 Melbourne, FL - October 12, 2016 - To Write Love on Her Arms (TWLOHA) has released a brand new shirt to help fund mental health care in Haiti, where Hurricane Matthew recently took the lives of more than 1,000 people. Tens of thousands are now dealing with grief, trauma, and PTSD. A portion of the proceeds from every shirt sold will go to Partners in Health and Espere Counseling, two great organizations meeting mental health needs in Haiti. The shirt reads "nou avèk ou" which means "us with you" in Haitian Creole, a reminder to all those suffering that they are not alone. For more information or to purchase the shirt, please visit:https://goo.gl/6nlbEX.
"The people of Haiti need our help right now. Tens of thousands are starting over after losing loved ones and losing homes. In America, our headlines are dominated by the election, but Haiti deserves our attention," TWLOHA founder Jamie Tworkowskishares. "Simply put, it's a crisis. This shirt is a small attempt on our part, to shift the focus and to do what we can to help our neighbors."
To Write Love on Her Arms is a nonprofit dedicated to presenting hope and finding help for people struggling with depression, addiction, self-injury, and suicide. It exists to encourage, inform, inspire, and also to invest directly into treatment and recovery. Since its start in 2006, TWLOHA has donated over $1.6 million directly into treatment and recovery and answered over 180,000 messages from over 100 countries.
Over the past ten years, TWLOHA has been heralded by press and seen on NBC Nightly News, CBS Sunday Morning, MSNBC, Rolling Stone, Paste Magazine, Relix, US Magazine, Glamour, Yahoo!, The Huffington Post, The Chronicle of Philanthropy, NYLON Guys, MTV, Elle, NPR, and so many more. The organization has seen support from numerous celebrities including actressJessica Chastain, actor Jared Padalecki, Miley Cyrus, Liv Tyler, Joaquin Phoenix, actress Sophia Bush, singer/songwriter Mat Kearney, USA soccer stars Alex Morgan, Ashlyn Harris and Ali Krieger, singer/songwriter Christina Perri, rock band Switchfoot, pop rock act The Summer Set, Hayley Williams (Paramore), among others.
This past September, TWLOHA wrapped its 5th annual campaign to honor National Suicide Prevention Week and World Suicide Prevention Day. The organization was overwhelmed by the amount of love and support shown during this year's campaign, titled "And So I Kept Living,"which, thanks to the help of supporters all over the world, raised more than $98K for treatment and counseling.
BANGS! cowgirlzen Haiti To Write Love on Her Arms <br> New Shirt to Support Mental Health Care in Haiti