Album Review: Simi Valley Has Got PUNK! New Album from No Advisory

November 02, 2016
No Advisory
"Everyone Is Stupid"
Reviewed by: Chris Marz


Music in many ways helps us recall a feeling. Sometimes that sound and feeling you are hearing comes and goes. It may not stay with you because he doesn’t evoke a strong emotion or attachment. Sometimes we are waiting for that time when a song, album, or band strikes that chord we can relate to and it brings back a flood of memories with it. Such is the case with punk band No Advisory's newest album, “Everyone Is Stupid.”

This album is the sound we all remember. The same sound our parents and neighbors told us to turn down. This is the music the establishment warned us about and it sounds so good. The band No Advisory time after time relays that sense of rebellion against the mainstream and “Everyone Is Stupid” drives that point of modern societies lack of individualism and free thinking home.
No Advisory’s newest album, “Everyone Is Stupid” takes us back and puts us right there where punk first started breaking through the barriers. What is super cool about this album too is it hits all the various genres of punk. You get a taste of the ska, the skater punk, the punk rock, and the post punk drive. What is so refreshing about No Advisory's new album, “Everyone Is Stupid” is it lives and breathes a variety of sounds from The Damned, Less Than Jake, Pennywise, NOFX, Sex Pistols, Blink 182, Red Hot Chili Peppers- there isn't anything they've left out.

The opening tune and first single release, “Cotard Delusion” breaks through and showcases the drive instrumentally of guitar work that rallies the pace of this piece. “Bushwhacked” brings in the ska/skater sound, and the title track, “Everyone Is Stupid” pays homage to us being equal in our own right. The intensity of the Sex Pistols days comes screaming through on the track, “Riot.” Finishing off this sophomore album No Advisory chose the tune “Good Enough” and it was the perfect choice as it seems to be the anthem song for this album. This album shows the diversity and strength of not only No Advisory as a punk band on the 2017 radar (they had won Ventura County’s Best Punk Band category in 2016) but it also is a complete punk album. This is a band that the punk world has been needing and the album “Everyone Is Stupid” is the supreme punk album for 2017. 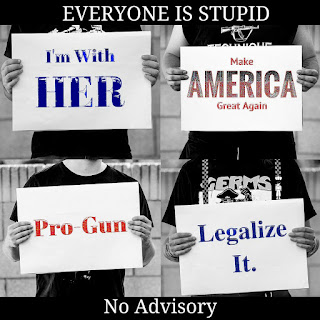 “Everyone Is Stupid” Tracks: