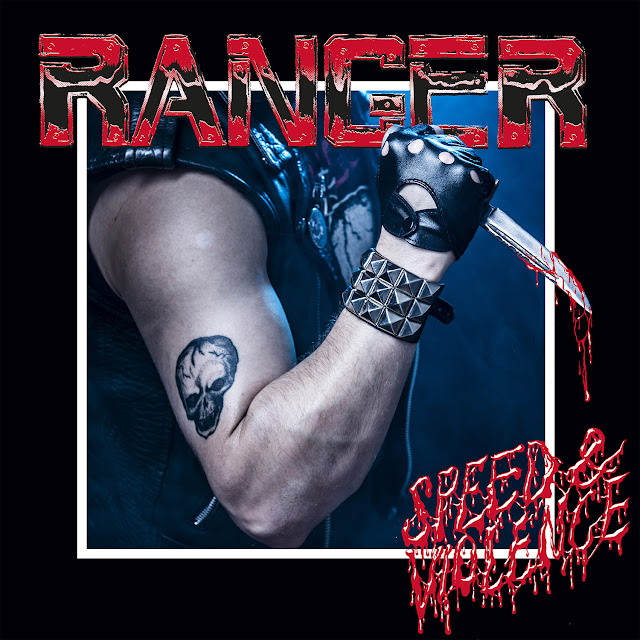 Ranger is a kick ass speed metal band from Helsinki, Finland. They are a “Shock Troop” that was founded in 2008. With the forward charge of being known as the “New Wave of Finnish Speed Metal,” these four guys have a passion for heavy metal. When music is in your blood it is never enough to just spend all your money on records.  Mere listening to heavy metal, watching old concert videos and headbanging wasn't enough so they decided to form the fastest, loudest heavy metal band ever in Finland.

The current members are Miko [drums], Dimi Pontiac [vocals and bass], and on guitars, we have Mikael Haavisto  and Ville Valtonen. These four guys have kicked it up a notch and taken it a little faster for their latest album 'Speed and Violence.'  These young Finns have taken the time machine to the good ol' speed metal of the 1980's and upgraded it with a hint of 2010's thrash vibe and oodles of youthful vigor, and the result is a glorious bunch of head-banging anthems for the new generation that sounds every bit as great as the album art looks! "Night Slasher" is nigh!

After three demos, several EP's and the launch of their 2012 record 'Metal Gear' (on ektrorecords), Helsinki’s full throttle cranked up metal band, Ranger, was ready for the next step. This is where their new label signing with Spinefarm Records kicks Ranger up to the next level. This December 2nd, the album 'Speed and Violence' will be released on, Spinefarm Records. Judging by their demo material and previous records, this is going to be a totally ripping speed metal affair with hints of both thrash as well as pure heavy metal.

From the opening “Intro” that is wickedly haunting to the title track, “Speed and Violence” through the aptly named "Last Breath," Ranger puts out another slab of SPEED METAL leaning heavily on their obvious influences. This is ear/soul splitting speed running beyond the screams of the night.

Lyrically there is little here to make one stand up and take notice. Musically, probably the same, but there are some great riffs the band throws out and are used to pummel us to a blistering delight. It’s difficult to choose any tracks that truly stand out from the others, but I would have to say that “Satanic Panic” could have fit somewhere on Slayer's sound of “Show No Mercy.” The band ties in a Judas Priest element at times as well, heard in the harmonized guitar leads on “Without Warning.”  “Night Slasher” and “Shock Troops” stay true to what was laid down several decades ago.

Is Ranger is groundbreaking? No. Fun and entertaining? Absolutely. With an album that clocks in at a little over half an hour, it seems like about the right amount. Not so little that you will yearn for more and not so much that it overstays its welcome. What Ranger brought with this album too is the album cover art and album title fit their music well!

Now with EPs and a couple of albums under their belts, Ranger has established themselves as a consistent modern throwback. 'Speed and Violence' probably won’t blow your mind, but it should get your head moving and maybe even make you thrash about like it was the 80's headbanging metal glory days again. Strap yourself in and hold onto your seats as Ranger's album, 'Speed and Violence' is bound to get you off your seats and banging your head along to the wicked beats!

Ranger's 'Speed and Violence' on Spinefarm Records is a prime example, that takes you back to your days as a teen listening to the most extreme music that could be found at the time. Recorded in analog, Ranger stays true to their speed metal roots.