Are You Needing a Pick Me Up? Emo Nite Is Coming Your Way! 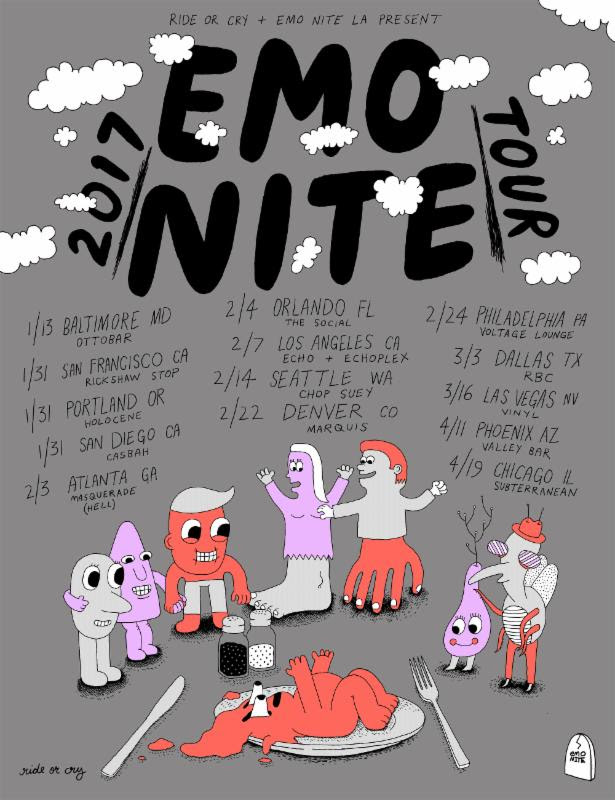 January 9, 2017 - Los Angeles, CA - LA's monthly Emo Nite event had a massive celebration last month at The Echo/Echoplex in Los Angeles to celebrate their two-year anniversary. Over 2,000 attendees joined Tyson Ritter and Nick Wheeler of The All-American Rejects, Aaron Gillespie (Underoath/The Almost), Jordan Pundik (New Found Glory), Craig Owens (Chiodos/BXC), Cartel, Set Your Goals, State Champs, Fil Thorpe-Evans (Neck Deep), Tyler Posey, The Rocket Summer, Brian Logan Dales (The Summer Set), My American Heart, Captain Cuts, Ham on Everything, Team Up (UK), the Emo Nite Bawltimore Team, Movements, I Don't Know How But They Found Me, Tillie, Luna Shadows and Love Nothing in celebrating this momentous occasion during a SOLD OUT evening of music, friends, marching bands, cotton candy, balloons and more. For a look into the evening, check out the video recap from APTV, here.
Nearly 100,000 Emo Nite fans around the world joined in for the massive party thanks to Twitch and the team at IHEARTCOMIX's Live Stream Music Series 'Party Stream' for an event like no other, STREAMO NITE! Typical views range around 50K for these party streams. Emo Nite teamed up with IHEARTCOMIX again, in addition to Brownies & Lemonade, Ham on Everything, Space Yacht, Free Grilled Cheese, Late Night Laggers, and Restless Nites for LA GIVES BACK, a charity event headlined by Diplo, to raise money to help LA's  homeless youth in December. Over $50,000 was raised and 100% of proceeds went to benefit local charities.
Emo Nite launched their latest fashion collection, Emo Nite Capsule II at the two-year anniversary party, after exclusively announcing with Galore Magazine. The new collection consists of a hoodie, windbreaker, beanie, long sleeve shirt and some various t-shirts, along with various limited edition variants of each item. The collection's look book can be viewed here and is available for sale at emonite.la. They have also announced the first wave of their 2017 Tour Dates, visiting markets like San Diego, Portland, Phoenix and San Francisco while also adding in new cities like Philadelphia, Chicago, Orlando and Dallas. This is just the first in many exciting announcements to come from the Emo Nite team in 2017.
On celebrating their two-year anniversary, founder TJ Petracca said, "It's honestly pretty surreal. This whole thing has gotten way bigger than we ever imagined or intended it to get. I'm so honored and happy to be celebrating two years of this party. We have made some amazing new friends, got to travel and see a ton of new cities, and meet our idols/heroes. Stepping back and looking at it from afar... I truly can't believe it." They show no signs of slowing down, having just announced another partnership with Vans Warped Tour at Warped Rewind at Sea.
The year has gone by fast and been very busy for the founders. Heralded by LA Times, Forbes, LA Weekly, Time Out LA, Billboard, Rolling Stone and more, Emo Nite is a monthly event that brings together people who share the love of emo rock music from the 90's, 2000's, and today. Different notable musicians from the scene have either DJ'd or performed at the event - previous artists have been:  Chris Carraba of Dashboard Confessional, Mark Hoppus of Blink-182, Jack Barakat and Alex Gaskarth of All Time Low, Good Charlotte, Mikey Way of My Chemical Romance, We Are The In Crowd, Sugarcult, Set Your Goals, FIDLAR, Chris Conley of Saves the Day, The Used, The Movielife, The Spill Canvas, Seahaven, Have Mercy, Jason Butler of letlive., State Champs, Bryce Avery of The Rocket Summer, Anthony Raneri of Bayside, The Wonder Years, Craig Owens of Chiodos, Jesse Mack Johnson of Motion City Soundtrack, Buddy Nielsen of Senses Fail and more.
Additionally, the Emo Nite team creates themed events and truly transforms the environment they are in. They had a country band take over and learn emo songs after taking part in a not-so-traditional western shoot out. See also a mariachi edition of "Sugar We're Going Down and an acapella-accompanied montage of the beauty that is Emo Nite. Founder Morgan Freed said he is "personally inspired by stuff we see everyday so we just apply that to Emo Nite. Like I went to dinner and saw a mariachi band and then was like let's do that."
While the three founders of Emo Nite originally set out to simply create a small get together of like-minded music lovers, the event has formed into more than just an extremely energetic party - Emo Nite is a community. From branded merchandise, to collaborations with large-scale clothing brands such as OBEY Clothing and working closely with local live shows, what used to be a monthly event expanded to something of a phenomenon.
What started as a nostalgic trip back to the era of myspace and skinny jeans soon became much more than that - it started a movement. It reminded everyone that there was something special and timeless about that moment in rock music called "emo." Something that was lacking in today's musical landscape - a community, and a safe place to be yourself. No matter who that is.
2017 Tour Dates
1/13 - Baltimore, MD @ Ottobar
1/31 - San Francisco, CA @ Rickshaw Stop
1/31 - Portland, OR @ Holocene
1/31 - San Diego, CA @ Casbah
2/03 - Atlanta, GA @ Masquerade (Hell)
2/04 - Orlando, FL @ The Social
2/07 - Los Angeles, CA @ Echo + Echoplex
2/14 - Seattle, WA @ Chop Suey
2/22 - Denver, CO @ Marquis
2/24 - Philadelphia, PA @ Voltage Lounge
3/03 - Dallas, TX @ RBC
3/16 - Las Vegas, NV @ Vinyl
4/11 - Phoenix, AZ @ Valley Bar
4/19 - Chicago, IL @ Subterranean
With More to Come...
For updates, please visit:
Facebook: https://www.facebook.com/emonightla
Twitter: https://twitter.com/emonightla
Instagram: http://instagram.com/emonightla/
Merchandise: http://emonite.la