Interview with David Aguiar of The BREVET- Epic Americana

From somewhere not too far down a backroad comes 'Epic Americana.' You can almost smell it, as its essence is freshly mowed grass. You can almost taste it, as its tantalizing taste buds zonker's are farm fresh eggs, bacon a black cup of coffee. You can almost feel her, as it is a cute little lab puppy curled up on the front porch by granny's rocker. It's the epic that let's you feel all of its charms and remember the tales needing to be told even today. All across the world Americana breathes the resonating charms, and two step dance rhythm and harmonies of tales told to the tune of music. Anywhere in the world... Epic Americana fits right in as does the band, The BREVET. 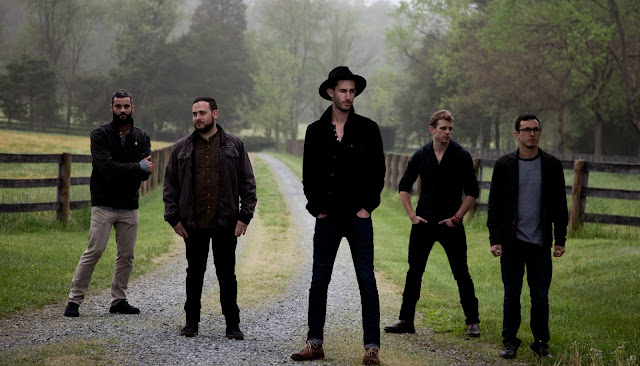 David Aguiar: Yup, it basically tastes like it smells. We got pegged with this early on, due to an obvious Americana influence along with sweeping orchestral sections, lots of shouts, "whoa..oos," themes about perseverance, hope, love, etc. So, we think that accounts for the epic part of that equation. When we first heard people describe our music as Epic Americana, we all sort of looked at each other, shrugged our shoulders and went with it.

Song River: Country music has splintered into a thousand sub genres, just like Rock, EDM, Punk, Metal, etc... do we concern ourselves too much do you feel with placing sound inside a label?

David Aguiar: We really don't concern ourselves with  being  "pigeonholed" into a specific genre. Between the five of us, there's a ton of different influences, so when we're writing and recording, we really try our best to stay honest and true to the songs. Once we decide to do that, what people want to call it is up to them (i.e.: Epic Americana).

Song River: The BREVET tells stories. Where did story-telling come from within the band?

David Aguiar: As the drummer of this operation, I can say that one of my first impressions of our primary lyric writer, Aric, was his ability to dive into a theme and pull a great story out of it. Aric has lots of experience acting as well, so i think being able to immerse himself into a character comes naturally, and he does it really well.

Song River: When you perform is the stage setting one meant to open itself to bring the audience in to be observers or participants?

David Aguiar: We always appreciate and encourage people to stand up, get up close to the stage, clap and sing along. That being said, we put a lot of energy into our musicianship, harmonies and presentation. So, when I see someone sitting down, smiling, feet tapping and head nodding, I still feel like they're participating as observers.

Song River: Storytellers often see life a little differently than the passerby. What sparks a story- curiosity, imagination, or living?

David Aguiar: Yes, all of the above. Although, I believe the main difference between a storyteller and a passerby isn't so much a different perception on life. I think the main difference is that story tellers are opportunists and masters at pulling great stories out of everyday experiences.

Song River: Arc and Michael you have had a long relationship. A kinship that almost seemed destiny played her hand in. Back in seventh grade early Jr. high did the music department actually see in the two of you the potential all through your schooling years?

David Aguiar: Irvine Public Schools Foundation (IPSF) really support the arts in a special way. From what I've seen, they really support the potential of ALL their students. Aric and Mike were lucky enough to be a part of that, and have continued to support IPSF throughout the years.

Song River: Early experience had you writing scores for short films, which in turn lead to some high profile placements. Does your story have to match the film or short story or commercial even in your mind, or is it open for interpretation to be used as deemed necessary?

David Aguiar: Themes are definitely done with intention, but from there, it's all interpretation, especially with  licensing.

Song River: A clear vision seems to lend itself to a purity that only comes by storytelling. Is there still room for the spoken yarns as well as the musical ones?

David Aguiar: With us, everything is a means to a musical end. The spoken stories are meaningful, but without the music, the collaboration is gone, and what we know as The Brevet wouldn't exist!

Song River: Does anyone write actual stories in the band? Book published or in the works?

David Aguiar: No, but that's a great idea! Our lead guitar player, John, has traveled a whole lot and has a knack for long winded rants. So i wouldn't be surprised to see his book out in the next decade or so...

Song River: Life, if you are living it, has mountains and valleys. How do you as band mates help one another over the hill and up the hill sometimes?

David Aguiar: We really help each other and ourselves by being open to criticism. Sounds simple, but it takes a lot of trust and confidence to let someone call you on something, and really consider it.

Song River: Any particular challenges along the way that you would care to share?

David Aguiar: It's definitely challenging at times to keep our heads up as an emerging band. We're moving fast, and it's really exciting, but it takes a lot of compromise from our personal lives and our ability to put food on the table. It's one of those challenges that really keeps you accountable at every turn.

Song River: This world needs music, and in that need it suffers when it does not listen. Storytelling is designed to help the individual tune in and perhaps become retrospective. Does this type of music style you embrace help settle the noise of the world for you all personally?

David Aguiar: Absolutely!  I think music in general works as a universal language. It settles noise, it spreads noise, it organizes noise.

Song River: Album, short tour through February 9th along the west coast. Any chance of a festival or other dates in 2017?

David Aguiar: Yes! We've got a crazy year ahead of us; a few tours lined up, and a bunch of unreleased material, so stay tuned!