BANGS!: It has been a long trek since your last album, Few Against Many. Has there been a “war” of sorts during the two albums that lead to this conceptual album?

Gus G: Not at all. Few Against Many was a very different record than Immortals. It was our attempt to experiment a bit and try out different things. Our new album is our first concept and it's about our Greek heritage and mainly referring to the legendary battles of Thermopylae and Salamis.

BANGS!: Henning Basse is now the frontman of Firewind. What does Henning bring that Firewind has wanted all along?

Gus G: First of all, he looks at this band as a long term thing and not a publicity stunt that'll get him to the "next gig." He's been a fan of Firewind since our early days and has saved the day on several occasions when we were in the midst of a tour without a singer.  He brings a great new energy to the band which we needed. And by the looks of it, nobody really misses our previous guy and that's something that's VERY hard to pull from the start. Yes, he's THAT good!

BANGS!: Writing takes on so many different forms. From where did the inspiration come from as this conceptual album embraces a period of time, and war?

Gus G: Actually Dennis Ward and I (the co-producer) were working on a similar power metal project back in 2009 that was meant to have this kind of thematic elements. But that project was shelved back then, as I went on to work with Ozzy. I recently revisited some of those older demos and thought they still sounded great and approached Dennis to finish it up and maybe expand on it and make a concept album for Firewind.

BANGS!: Was it difficult to give yourselves permission to slow the pace down to write a story album, rather than several individual tracks?

Gus G: You just need the right mindset and timing for these things. I didn't know how to make a concept album, that's why I turned to an outside co-writer and co-producer like Dennis. I had compiled material the past few years that sounded more epic, so I thought now would be a good time to try it out.

BANGS!: Why did you chose to use an outside co-producer, Dennis Ward?  What is it do you think Dennis brought to the table that maybe wouldn't have happened if he didn't come in?

Gus G: Dennis is good with lyrics and he took up the challenge of making a concept record. None of us in the band are good lyricists particularly. I’m usually responsible for the music and arrangements. I have title ideas, and some lines but not full lyrics. Dennis helped a lot to put things in order and guide me thru what this concept would be, narrow it down to specific story and time in Greek history. Plus he engineered and mixed the album too.

BANGS!: This album, Immortals is a melodic speed/metal album. Kind of reminiscent of the days of Dio's craft. What do you say?

Gus G: I take it as a compliment. I love Dio.

BANGS!: From start to finish you have created a whole package. Music, story, artwork. Now what about stage presence during your coming tour performances, do they as well fit the bill?

Gus G: We're not sure if we're gonna go on stage with makeup like we did on the "Ode To Leonidas" video, or just be Firewind "as usual." We'll see about that.

BANGS!: As the homeland for the band comes from Germany, Belgium and Greece do you find a mixture of metal sounds and genres between the countries over there?  How about in comparison to the metal bands in the United States and the rest of the world?

Gus G: I try not to think too much about the sounds and what country should sound like. I try to focus on how I want us to sound like and hope that people will like it in the end.

BANGS! : "Ode to Leonidas" as this one was chosen to be released as a single/video, it is quite the high drama. What was the film set lot like? Did it at times feel awkward to be standing in front a huge green sheet and 'acting' out the parts?

Gus G: It's pretty amazing what Ivan, the director and his team created. I'm always blown away by how he visualizes  the final result when he has everyone standing in front of a green screen. I've done a few videos like that in the past, so it's not awkward for me, I just perform and do my thing. But it's always exciting to see the outcome.

BANGS!: How much do you, Gus G., and your Ozzy guitars bring into Firewind?

Gus G: Without a doubt I've been influenced by Ozzy's sound a lot since the day I joined his band. I was always a fan of course, since the days I picked up the guitar, but now it's different as I've been flying the flag of his brand of Metal the past 8 years. Firewind have their own style and sound too, so I know how to separate the two by now.

BANGS!: Touring begins mid-February, the day after Valentine's Day. The great story of 480 BC certainly must mean something deeper to all of you than just a mere marking of a cool idea. What is it you want to bring in connecting with your fans during the short tour stops in Germany, Belgium, Austria, France, Hungary and the Czech Republic?

Gus G: Well, for us it's our heritage, where we come from. But aside of that, the story about those legendary warriors embraces loyalty, morals and high ideals. These are good things to live by.

BANGS!: What metal festivals are on the horizon for 2017?

Gus G: We're already booked for quite a few and we'll keep announcing more. Keep checking bandsintown.com/firewind for all our official tour dates! 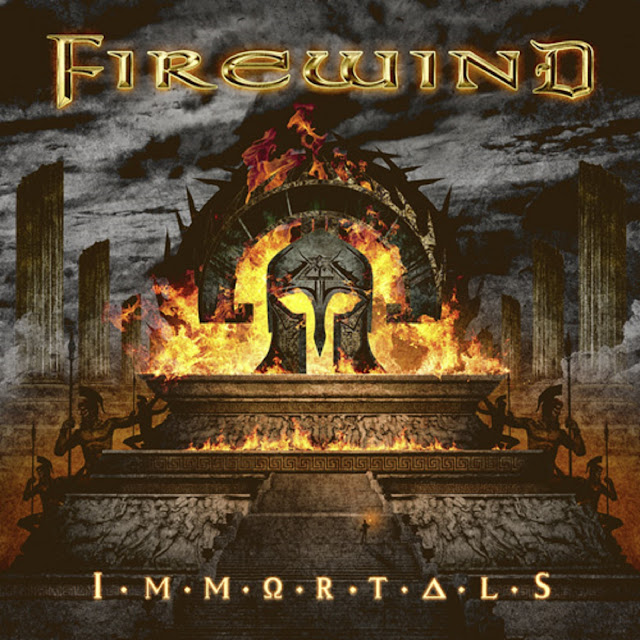