A classic much to the sound of hard rock comes driving over the airwaves when you plug in your player and head out on the open road. There is something undeniably freeing to the rock sounds that emanate and transpire between the squeal of your tires on the pavement and the driving guitar/drums/bass and vocals of Reid Henry.

Never Say Die hailing from the rock capital of the Canada, come reaching out from Toronto to the states as they take a rock n roll path you will not soon forget. Their debut album- Destroy + Rebuild is the primo hard rock album from beginning to end. Catch Never Say Die out on tour through April in the states. 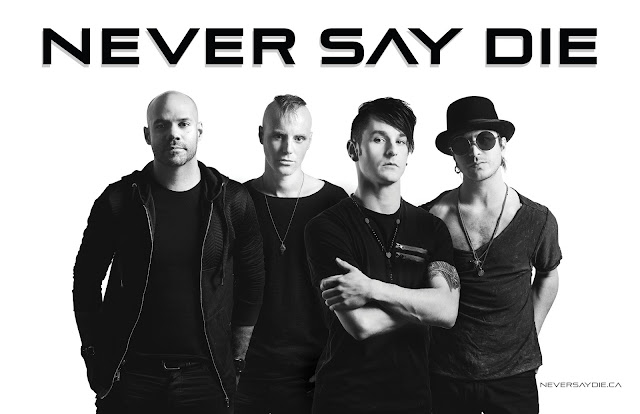 BANGS!: What is it about long drives that inspires some of us to think so much that we have to create?

Reid Henry: Any chance I get to write or play music I take it.

BANGS!: Many will ask, why the hiatus, especially on the heels of great success... however, looking at this from another perspective wouldn't that be the perfect time to stretch and possibly explore another avenue of creation?

Reid Henry: Our singer Matt got a once in a lifetime opportunity to play with his brother in Three Days Grace. For me, it's an opportunity to challenge myself to rise with the tide.

BANGS!: Was the intention there all along to take Never Say Die from a studio project to where it is now?

BANGS!: There seems to be a definite importance behind the band's name, as we see the words, "Never Say Die" show up quite often in titles, and phrases.  What was it for you to take these words and hold it as your band title?

Reid Henry: “Never Say Die” is a British idiom that means to not give up. We thought it was a fitting name for our band. Plus it sounds metal.

BANGS!: The tune "Automatic" has a great hook immediately. It's rock. Talk a bit about the structure of the song.

Reid Henry: “Automatic” is a robo love song... we wanted to make the instruments on the track live up to the words in the song.

BANGS!: Listening to "Like A Nightmare" and reading over the YouTube comments, one fan asked how in the world you got your guitars to do what they do in that song- yeah tell us!

Reid Henry: The reaction to “Like A Nightmare” has been really exciting. It was one of the first songs we tracked for the record.

I had made a bunch of evil sounding 8bit keyboard parts in Ableton that are underneath the guitars, I think that sets the song apart.

BANGS!: Would you class some of your music darker and heavier towards the days of when you were performing in the band My Darkest Days?

Reid Henry: Although we borrow from the style of My Darkest Days, I think this band is unquestionably heavier.

BANGS!: How would you clearly define for your fans where Never Say Die is by comparison.

Reid Henry: Our music and content define us better than I ever could.

BANGS!: Toronto produces some of the best rockers- who have been some of your favorites from back home and abroad?

BANGS!: How important do you find the technique in what you are creating in this band?

Reid Henry: My technique in terms of songwriting is sort of whatever works... I try and use a fresh approach to each song and allow inspiration to come as organically as possible.


BANGS!: As this tour continues through the Spring in the U.S. have you found more times to pull out that laptop and write along the roads across the states?

Reid Henry: I have 5 or 6 ideas in really excited about and we another 20 or so raw riffs and ideas that we think could be really cool. The laptop is always out.

Reid Henry: All the touring... we'll be out on the road for the rest of the year and into next.

Check out our tour dates at www.facebook.com/neversaydietheband or our band site: http://neversaydie.ca/

No Never Say Die  www.facebook.com/neversaydietheband or our band site: http://neversaydie.ca/