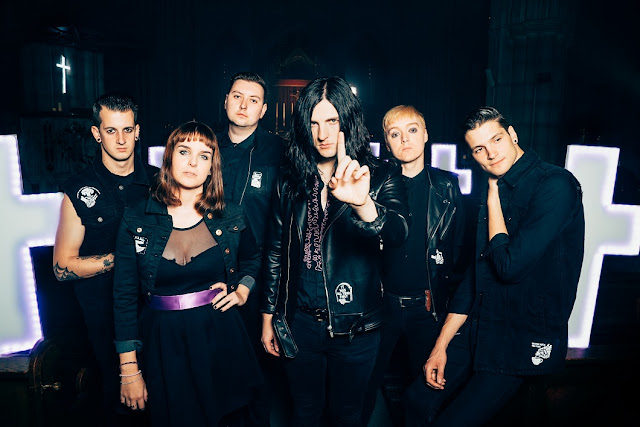 Tracking over the hotbeds of fodder, muck and pill bugs rolled up in piles of shit comes forth the far-reaching arm of what punk has been missing. It finalizes itself as nostalgia while the darkness breathes her effervescent struggles that take the punk and brew it with emo and slash it with garage rock. From the depths of your guts, this debut full-length album of Creeper has put its spell on all of us.

Finally, after two and half years of releasing only EPs, innumerable touring miles, and sweat-filled shows Creeper is debuting their full-length album, Eternity In Your Arms. Thank the gods...Creeper is finally upon us.

Gratefully the bandmates have never been ones to stand still long as they had set the tone for this release. From the opening track to the closing tune there is just the right amount of polish applied by Producer/Collaborator Neil Kennedy. Kennedy provided as his determinative the smoothed out edges of the Creeper sound for radio play, but it did not murder it to rob us of their trademarked 90's influences.

Frontmen Will Gould's voice, particularly on anthems like “I Choose To Live,” “Black Rain” and “Down Below” are the revelation of who Creeper is. You want to sing along and feel the pain too. The admiration in their dramatic graphic filled world of revelations and story lines blows the mind auditory and forces the natural curiosity shop inside us to admire their dark fragility. There is so much here being offered, so much that has not been heard since those days of My Chemical Romance, Meatloaf and the Misfits. This is a love letter written in heavy eyeliner to music. Every component is Creeper. The theatrics of torrential wretched souls belch something even deeper than what those days that have gone by can recall.

Creeper's spark has steadily been growing ever more so since the smart, component of Hannah Greenwood was brought into play keys and backing vocals in 2015. It is Greenwood that you will witness taking the scene across the track “Eternity, In Your Arms,” and her lead vocal in the acoustic country-folk of “Crickets” is absolutely spellbinding. Greenwood has set herself pointedly central on the Creeper compass. The edge is where Greenwood's vocal's take you.

Creeper's flair for the drama built a soiree of sorts. By invitation perhaps only, or a spotted dalliance of circumstance the band's disappearing prior to the album announcement sent fans scouring in their hometown of Southampton searching over a six-month teaser campaign. Creeper set their stakes high and in the world of punk rock they have added up a conceptual psychological meeting of universal euphoria that this debut album is finally here. Eternity In Your Arms is the grand unifying vision planned and executed supremely in a sign of supernatural being.

There isn't an empty space on this album. Creeper has delivered a perfunctory marked album. No holes. Everything filled. This is the album we all have been waiting for.