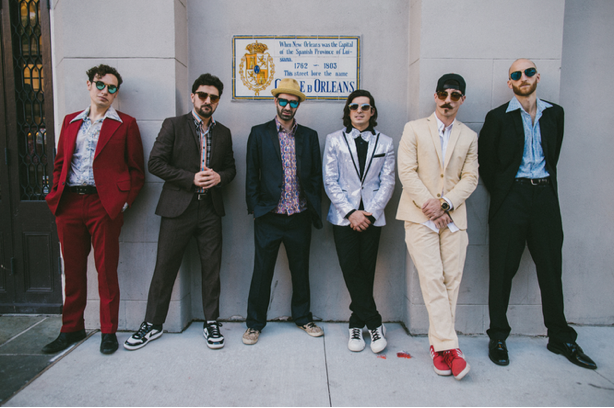 Watch The Video For "You Know What It's About" on Billboard, here: https://goo.gl/juweN7

"Flow Tribe makes what has been called "groove-based gumbo",
a sonic mixing and melding of rock, funk, and R&B rhythms."
- PopMatters
"From a band that began their career performing for displaced Hurricane Katrina victims, the band has
continued to tighten throughout the years, brewing southern swampy rock with that upbeat NOLA funk to
bring something uniquely powerful, guaranteed to make you move."
- Live For Live Music
New Orleans, LA - April 27, 2017 - Flow Tribe teamed up with AXS to exclusively stream their new album BOSS today! BOSS was produced by New Orleans' own Mannie Fresh, a Grammy nominated producer responsible for creating hits for UGK, Lil Wayne, Big Tymers, Juvenile, Gucci Mane, Jeezy, 2 Chainz, The Notorious B.I.G., T.I., and more. Listen the album now exclusively with AXS, here: https://goo.gl/qSb9MG
Few bands arouse a crowd into a collective shake like Flow Tribe. The six-member band's onstage chemistry reflects a seamless combination of soul and movement that hits the audience within the first few notes. Virgin listeners and avid fans alike are drawn in by the distinctive sound that feels both familiar and original. Outfitted for each performance in colorful, carefully selected suits, it's clear their focus is sharp and the party has begun. This is the work of professional musicians who've found their passion, and are living a dream where everyone is welcome.
Second line brass and Cuban-Caribbean rhythms meld with R&B, soul, rock, and hip-hop beats in high-energy performances that turn every show into a celebration. New Orleans is influence itself, the unparalleled free and easy city weaving its way into track after track of original scores that make up a single definition of sound, which Flow Tribe has dubbed "backbone-cracking music."
K.C. O'Rorke (vocals, trumpet), John-Michael Early (harmonica, washboard, vocals, keyboard), Russell Olschner (drums), Chad Penot (bass, vocals), Bryan Santos (guitar, timbales), and Mario Palmisano (guitar) are native New Orleanians and high school pals who've been writing music and playing live shows since the band's inception in 2004. Post graduation, they went their separate ways, but after Katrina, each returned to their hometown, inherently becoming active members in the rebuilding of a community that's stronger than ever. Flow Tribe may well be the city's next music ambassadors.
With two full-length albums and several EPs under their belt, the crew is currently building Downman Sounds, a studio in New Orleans East where they expect to cut their next record. The Tribe can be found crisscrossing the US just about every week of the year, from Key West to California, including regular performances at the notable New Orleans Jazz & Heritage Fest and Voodoo Fest.
Flow Tribe's upcoming album BOSS is set to release on Apr 28th! For more information, please visit: http://www.flowtribe.com/.