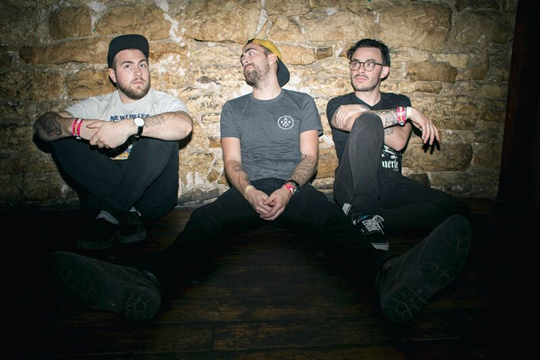 To Perform at 2017 Punk Rock Bowling Festival
in Las Vegas, NV
Upcoming Shows with Face to Face
Tour Kicks Off May 11th
April 24th, 2017 - ASBURY PARK, NJ - Three-piece alternative punk band Lost In Society, have announced a limited edition 7" flexi vinyl that holds two new, unreleased songs. The red, transparent vinyl includes the tracks "Kid" and "True", which were recorded with Pete Steinkopf of The Bouncing Souls. The flexi will be released officially on Friday, May 12th, and can be pre-ordered through the band's merch store, here: https://goo.gl/31yDGB
To celebrate the release, Lost In Society will be heading out on a run of dates with Face to Face kicking off May 11th in Brooklyn, NY at Knitting Factory. The band will then head out on a tour taking them to the west coast and are confirmed to perform at this year's Punk Rock Bowling Festival in Las Vegas, NV. A full list of cities they'll be headed to can be found below.
Jolting, fierce and raw: Lost In Society's live show has been described as all of the above. The NJ-based alternative punk act has performed at large festivals including Vans Warped Tour, Punk Rock Bowling, Fun Fun Fun Fest, SXSW, CMJ Music Marathon, and Fest. Lost In Society is known for bringing fans out the same way old punks did -- by word of mouth. Having toured all over the map and sharing the stage with the likes of Taking Back Sunday, Dead Sara, The Bouncing Souls, Bad Religion, The Flatliners, Misfits, and SWMRS, the trio is showing no signs of stopping.
Last year, Lost In Society released their highly anticipated album Modern Illusions. Fans can purchase a digital copy on iTunes now, here: http://apple.co/1QilDXn as well as physical copies on the band's website, here: http://bit.ly/1SMhFIp.
Lost In Society is Zach Moyle (guitars + lead vocals), Nick Ruroede (bass), and Hector Bonora (drums).
For more information on Lost In Society, please visit: http://www.lostinsociety.com.
Upcoming Tour Dates:
**with Face to Face
May 11 - Knitting Factory - Brooklyn, NY**
May 12 - Once Ballroom - Somerville, MA**
May 13 - House of Independents - Asbury Park, NJ**
May 14 - Rock and Roll Hotel - Washington, DC**
May 17 - Pubtime - Chicago, IL
May 18 - The Beachwood - Des Moines, IA
May 19 - Moe's BBQ - Denver, CO
May 20 - Kamikazes - Ogden, UT
May 21 - Shredder - Boise, ID
May 22 - Victory Lounge - Seattle, WA
May 23 - Twilight - Portland, OR
May 24 - Shea's Tavern - Reno, NV
May 25 - Neck of the Woods - San Francisco, CA
May 26 - Redwood - Los Angeles, CA
May 28 - Punk Rock Bowling Festival - Las Vegas, NV
May 30 - TBA - Phoenix, AZ
June 1 - KickButt Coffee - Austin, TX
June 2 - HiLo - Oklahoma City, OK
June 3 - Memphis Punk Fest - Memphis, TN
June 4 - The Milestone - Charlotte, NC
June 23 - West Long Branch, NJ - The Brighton Bar w/ Nothington
For updates on Lost In Society, please visit:
Facebook: https://www.facebook.com/lostinsociety
Twitter: https://twitter.com/lostinsociety
Instagram: https://www.instagram.com/lostinsociety