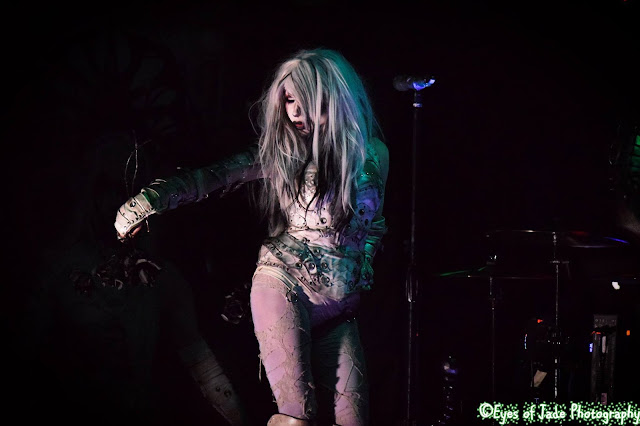 Hello, My Wicked Wednesday metalheads. It’s that time again for another blood thirst review by yours truly. This week I am taking you all on a journey with me from the Blood, Lust, Death Tour that was at Club Red on April 8th, 2017.

When I walked into the venue, I quickly noticed the difference in the surrounding vibe vs. the vibe I normally get when I am at other shows. This was a true Industrial Metal show that I was about to embark upon up close and personal.

I arrived when Sons of Providence went on stage and this band is only a 2 man band. Memphis Roarke on Vocals and Upright Bass along with Zebulon Hunting on Drums and Programming. Impressive to say the least. Lighting was dim and focused on Memphis’s haunting embrace while he was singing. With a mixture of industrial, and uniqueness I have yet to put my finger on. I would like to hear more of them to be able to wrap my head around the lyrics and musical hypnotically that draws you in.

Davey Suicide was due up next and when it was time for him to come on stage, It was like a big huge heaping serving of Here I am, take me as I am or Fu*k you. The true apparent form of rock, grunge, and Industrial metal hasn’t gone anywhere. Davey Suicide, Needlz, Niko Gemini, Drayven Davidson, and Derek Oscura are true to form of what you originally fell in love with. When you hear Davey Suicide rise from the ashes like a Phoenix after his 2015/2016 legal battle between his former record label, It went to prove that anything is possible if you want it bad enough. Davey went into songs like “Dirty Rotten Filthy Rich," and "Rise Above” along with older and newer material.

A meet and greet was after the set and It was nice to say hi to Davey. He’s a genuine soul that is very passionate about music, the industry, integrity, and his tattooing. Keep watching for their new video and upcoming tour dates for a city near you.

September Mourning came out with a completely different feel, almost like you were being drawn into a surreal world where your soul is being consumed by curiosity and a bit of fear with the unknown. The character and singer Emily Lazar as September Mourning calls her followers Children of Fate. Enticing them with encouragement to step out of the norm, and embrace what you may question and fear. With her new album Volume II, September Mourning draws you in and takes you along her journey into death and playing with fate all while she sings her songs like a siren in the underworld.

After I was able to breathe again from my soul being sucked out from photographing a reaper hybrid, it was time to turn up the volume one notch and kick this mutha into gear.

Combichrist drummer Joe Letz, started out with tearing into his solo drum then tossing it into his kit. Yes my metal feeding frenzy dolls, Combichrist brought down the house.

Joe Letz (Drummer), started the whole set off with his pink hair in pigtails, black face, SICK tattoo across his stomach, and of course I can’t forget to mention his pink bikini top, with his spandex adorned with his pink tutu. Now if that isn’t enough to imagine or envision, imagine seeing him rock out on his drum kit and knocking over his drums all while the stage hand was behind him, waiting for the next move Joe might make. Quite unpredictable to say the least, VERY highly entertaining. Lead Vocals, Andy LaPlegua, started out with “What the Fu*k is wrong with you,” “Shut up and Swallow,” mixing it up with “Skullcrusher,” all the way into “Sent to Destroy.” In the meantime, Joe, is tossing sticks all over the stage.

It felt as if I was engaged in a Slipknot show in a lesser of a forum, but just as entertaining, full of energy and power hitting to the gut. Like I said, Combichrist brought down the house completely. I think the roof is barely even hanging on at this point.

How do you even try to top that after Combichrist? I heard so many of the fan’s saying WOW, what a wicked show, they wanted more!

Well they got MORE, with +DOPE+. Edsel was a dark silhouette that shadowed against the backdrop playing scenes from PULP FICTION the movie leading into “X-hale,” “Blood Money,” “Die Mother Fuc*ker Die,” “Bitch,” leading into the Billy Idol cover – “Rebel Yell” which got the crowd going.

The history of +DOPE+ starts back in 1997, In Chicago, Illinois and for 20 years this band has maintained its individuality, industrial metal sound with twists and turns that have kept fan’s inquiring what’s next with Edsel. Spending the evening hearing Edsel and watching Virus on guitar, the entire ensemble of tonight’s BLOOD, LUST, DEATH tour was enough to make the crowd scream into an orgasmic hypnotic state where they wanted more, more, more.

Arizona was the 2ND to last stop for the BLOOD, LUST, DEATH 2017, So not only was this exciting to see Dope after all this time of not touring, But it was just a kick ass congregation of Industrial, Grind, Metal that makes you fall in love with the dark side once in awhile. The curtains fell and it was time for the lights to go back on, and that lovely song on the overhead of so long, farewell.

So, until the next show… I am out the door. This is your redhead with the red camera signing off for now. See you at my next journey into the musical realm of metal darkness and seductiveness. Care to join?

Watch for my reviews every Wednesday, with new info on bands, reviews of recent concerts, new albums that are being released, and Q & A of bands.
If you have any questions, Please hit me up at Eyesofjadephotography@gmail.com and I will be happy to answer or even relay them to the bands and see what they say.


Check out all info on the bands at the following sites: 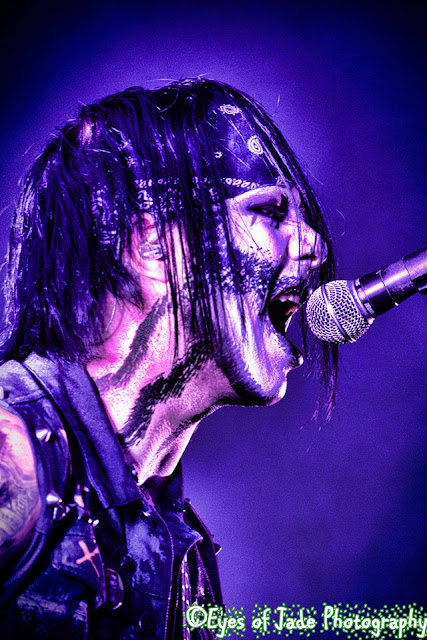 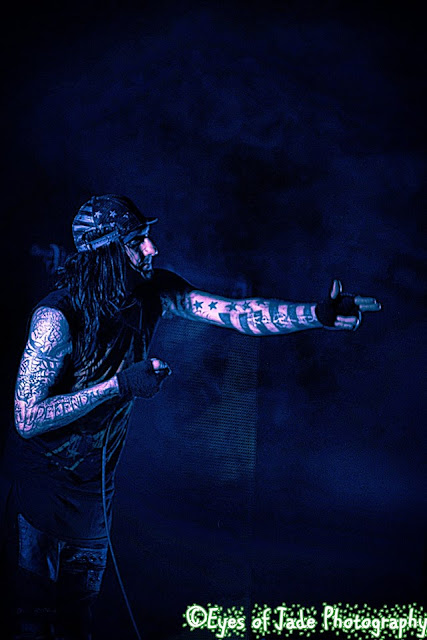 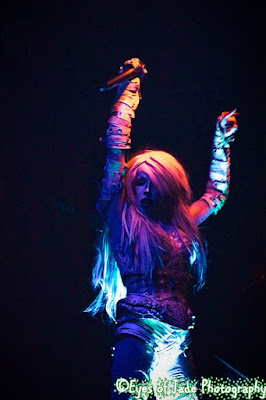 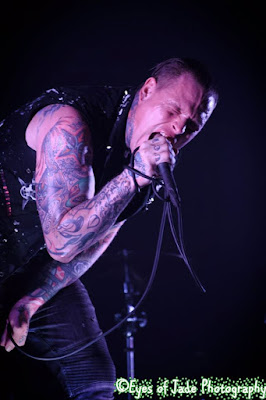 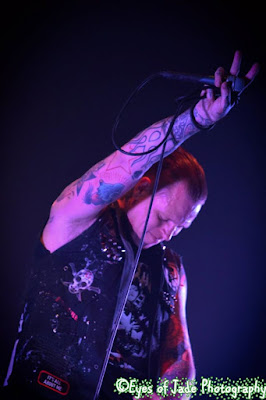 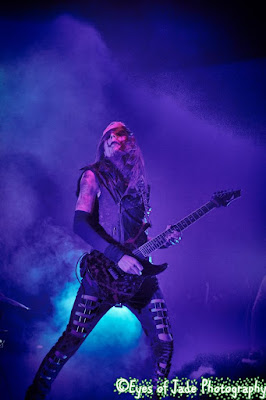 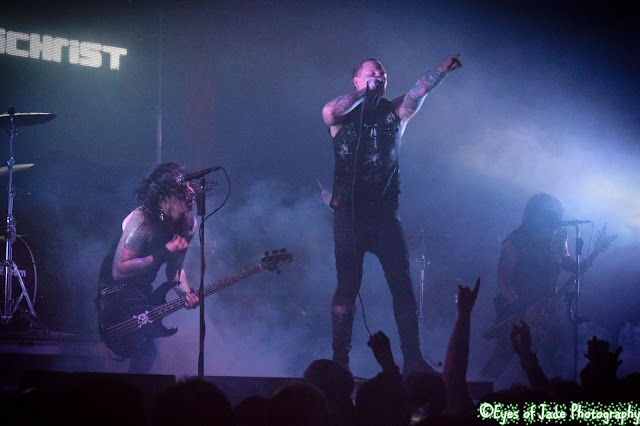 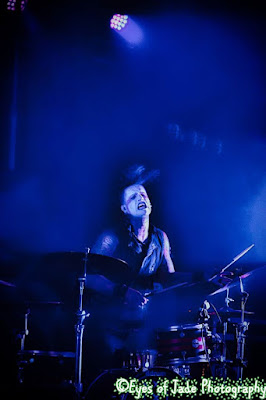 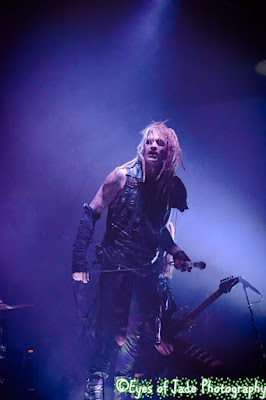 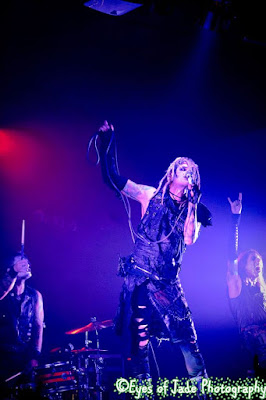 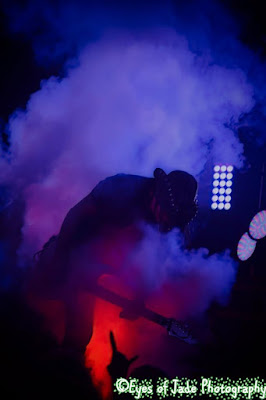 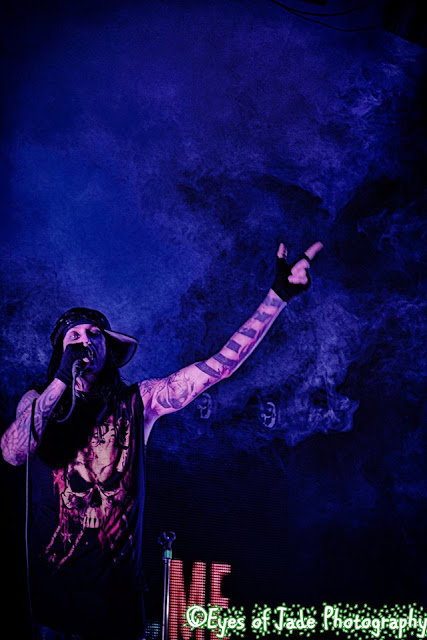