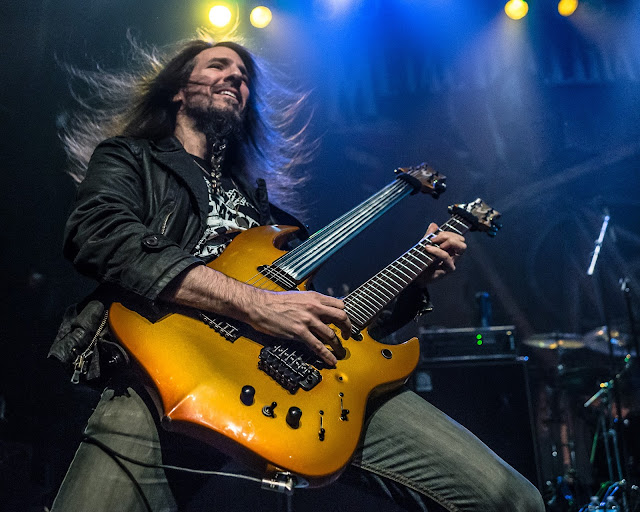 "Was a choice between this one and "Put Your Hands Where My Eyes Can See."  I love the choppy motions, the bent lens, the unpredictable imagery.  I always loved Busta's grooves and flow and quirkiness.  It influenced some of my own songs at a time when I was also producing a lot of hip-hop artists."- Bumblefoot

"Long before The Matrix movie, this was one of the first times I can remember seeing 360-degree action on screen.  Going back to the '80s before cable TV was available in the Bew York City boroughs, there was a metal music video TV show called The Power Hour, on channel 68.  I rigged up my own UHF antenna out of bent metal coat hangers to get TV reception...  this is where I saw this video, and any of the Power Hour videos bring back memories of being age 15 in my room at night, discovering lots of metal bands."- Bumblefoot

"One of the first lyric videos I've seen - its simplicity puts complete focus on the words, you pay full attention, you think, you carry the message with you long after the song has finished."- Bumblefoot

"This was a bold one to put out there lyrically, especially for its time.  It had a taboo lashing out at God.  Voicing deep resentment and abandonment, the symbolism, it was beautiful and unsettling, interlocked."- Bumblefoot

"Had I not seen the XTC video decades before, the seeds of this song may not have been planted.  This video is over seven minutes long, an epic style video with storyline footage showcasing characters in various stages of life, hitting their emotional 'rock bottom', and faced with a life-changing choice.
The stories are left open-ended, so you can ask yourself what choice you would make.  The song speaks for those that feel lost, betrayed, disillusioned, when we question all we believe in.
This is a song about being in our own personal purgatory, we know we need to heal, but we're not ready to let go.  The video was filmed in three countries with 12 sets and 50 actors, including the Western Wall in Jerusalem, the Fortress of Klis and Diocletian Palace in Croatia, and being granted exclusive access to ancient Roman ruins by the Jordanian border with the distinction of being the only music video to ever have been shot there."- Bumblefoot

Bumblefoot - Don't Know Who To Pray To Anymore