May 01, 2017
Deaf Poets have been cutting into the scene out of Miami have a low-fi DIY garage sound that is making waves. A creative channeling that signifies a defining change in the rock n roll stream. Clearly with the amount of time and efforts they duo Sean and Nico have put into their friendship and musicianship it is all coming to slamming the music down to say- "This is it." Seriously some crushing bleeding essence of pure heavy rock. Deaf Poets is worth the listen.

Their new album, Lost In Magic City, hits May 5th with a tour following. 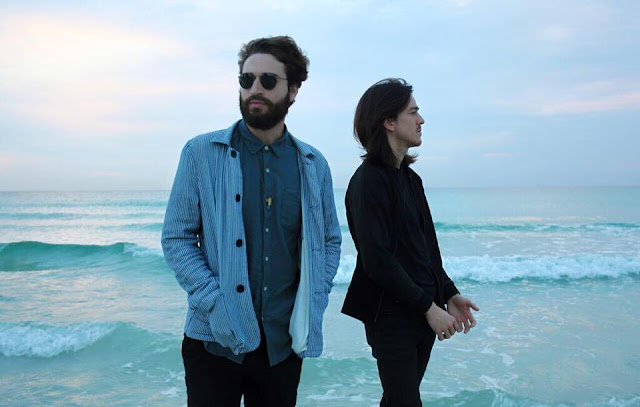 Song River: Tear apart the realm of your music world right now in descriptive words. What does it feel like?

Sean- Well it definitely feels like a million things haha. Ton’s of excitement and fun, mixed with lot’s of anxiety. Nico and I  tend to spend a lot of our free time together working on anything music related or catching up on the business side of being in a band. If we’re not on the road or gigging, we’re most likely working at our day jobs and spending the nights getting back into the groove. We set deadlines and goals for the future that we’re tackling everyday. The fun thing about being in a band is the endless possibilities.

SR: Listening to your tunes is a trip totally.  The depth and richness just beckons sweetly.  Do you feel those strong elements of classic rock are seeping their way back into mainstream rock music?

Nico- Definitely! It is so hard to escape it. There are a lot of bands today that keep those elements in their music, like The Black Angels and Tame Impala. Their music has traces of 60s and 70s  psychedelic rock and manage to do it in a way that its still sounds fresh and new. Rock music has a difficult time breaking through in today’s mainstream market and it is refreshing to see bands succeed while keeping the classic rock elements alive.

SR: Continuing this line of thought in the 'classics.' What was it you both found in Waters, Hendrix and Berry that just grabbed you and held on?

Nico-  Those three helped revolutionized and pioneered rock n roll music. They are the go-to when it comes to learning the roots of what rock music is today. I remember liking Chuck Berry from an early age. His catchy guitar licks combined with memorable lyrics and a steady driven drum beat, immediately made me get up and dance. One of the main things that stuck with me  from Hendrix was Mitch Mitchell on drums. Not only was he breaking barriers with his guitar playing, he also had the perfect drummer to complement his style.  Both of them just played what they felt and was very apparent in their playing.

SR:  How did you end up choosing 'Celestine' as your first video/single to send out? It is interesting from a band's perspective what and why they end up choosing a particular 'first' song.

Sean- We always felt it was a strong single and had great potential for a fun music video. The dark, strong and emotional vibe of the song created the picture the director envisioned with us. I personally felt it was a nice way of introducing the sound we’re heading towards.  A mix of catchy hooks and lyrics with heavy drums and guitar tones.

SR: The track "Eighty Eight" circulates some heavy vibe. How do you meld the two presence of now and pulling from the heavier classics?

Sean- This is actually one of our favorites tracks on the upcoming album. It has the vibe of “Celestine” with that drowny dark guitar but with more intense breaks and a more grungy chorus. The influences weigh heavy with Led Zeppelin and Nirvana to name some. With “Eighty Eight” we got that fat massive drum sound John Bonham was known for and tried catching some of those sharp piercing fuzz tones Jimmy Page would bring into the mix. My vocal range is entirely different from Robert Plant, but I always looked towards Kurt Cobain as a strong vocal influence. He’d always drive his vocals with his emotions and loved to scream. Something I did my best to bring into “Eighty Eight.”

SR: You've known each other since elementary school. During all this time have you both been jamming? When did it all take a serious turn? The one that said- "This it?"

Nico- Out of all the side projects we had before this one Deaf Poets was the first one that ever had traction from the beginning. Our first show had an overwhelmingly positive response that was unexpected considering we were doing it for fun. Because of that show were able to get a few more gigs, some write-ups and a music video.

Soon after we made the conscious decision to tackle whatever it was we were doing full on, and here we are today.


SR: For both of you, Sean and Nico, name two essential elements to the following: When writing we need?  When performing must have?

Nico- When writing: Clear mind and good working environment.
Performing: Water/Beer and a change of shirt. I get too sweaty.

Sean- When writing: Acoustic guitar when writing lyrics and a clear mind
Performing: Water and a monitor to be able to hear myself.

SR: Is pure unadulterated rock back again and do you feel you are a part of that wave that just exudes shooting it straight?

Nico- There’s definitely a wave of fun unadulterated rock music that’s very prominent in the DIY scene. When writing “Lost in Magic City,” we were shooting to embody the essence of rock music. We wanted simplicity with heavy distorted guitars and hard hitting drums. Nothing more, nothing less.  Hopefully we were able to achieve that and help us be part of the wave.