Recorded with Pete Steinkopf of The Bouncing Souls 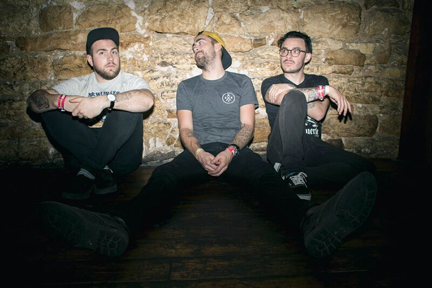 To Perform at 2017 Punk Rock Bowling Festival
in Las Vegas, NV
Upcoming Shows with Face to Face
Tour Kicks Off May 11th
Today, Brooklyn Vegan has the exclusive first listen of two brand new songs from three-piece alternative punk band Lost In Society. "Kid" and "True", which can be found on the bands upcoming 7" flexi vinyl release, are streaming now, here: http://www.brooklynvegan.com/lost-in-society-releasing-7-prod-pete-of-bouncing-souls-touring-w-face-to-face/

Both songs were recorded with Pete Steinkopf of The Bouncing Souls. The flexi will be released officially on Friday, May 12th, and can be pre-ordered through the band's merch store, here: https://goo.gl/31yDGB
Last year, Lost In Society released their highly anticipated album Modern Illusions. Fans can purchase a digital copy on iTunes now, here: http://apple.co/1QilDXn as well as physical copies on the band's website, here: http://bit.ly/1SMhFIp.