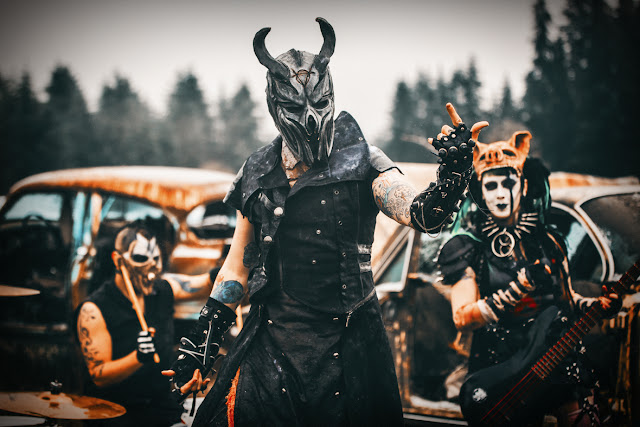 By: Contributing writer/photographer Teri Wright of Eyes of Jade.
What do you get when you mix +Dope+, Marilyn Manson, NiN, KMFDM together?
My industrial metal heads – This is the band I am going nuts for and there is good reason for it.
May I have the pleasure of introducing you to DEAD ANIMAL ASSEMBLY PLANT or also known as DAAP. This is a group that is going to make you sing every lyric with them when you hit a show of theirs. They not only have a unique distinct look, but they also have such a great mixture to their sound that you have to really sit down and it just hits you like BAM! Join me my Industrial metal friends and let’s go on an adventure together and meet the band, what is going on with them, and what we can expect from them in the future.
When I first found this band which was about 6-7 months ago, I stopped in my tracks and thought, “Wait a minute, what in the world? Who is this? “I had to search Youtube about them and found their video “RISE WITH ME.” That’s when I really got into this band and digested their insane bass riffs, Heart pounding drumming, and the crunchy beefy sound produced as a whole with this band.  I felt as if I just stepped into a blender and heard all the great industrial groups prior to DAAP. At that point, is when I said “I NEED TO KNOW THIS BAND!”
I really am impressed by this four-some. First off, the makeup and masks. Total gothic, haunting, and a bit like you’d see in a horror flick, same goes for their choice of clothing. It’s unique to each band member’s persona. Calling themselves “THE BUTCHERS,” I invite you to join me further into the slaughterhouse of DAAP and let’s dig in.
Come on in to the Sweet Meats Slaughterhouse. Hailing from Portland, Oregon. DAAP started back in 2007 with Brainchild Butcher Z. Wager infectious tones, doing production and not to mention his bone crunching vocals was mainly a solo project however quickly DAAP was to become a slaughterhouse built for four, not for one. On that we feast, and in 2011 the band began doing live shows. DAAPs menu consists of Rebecca “Buzz”Wager on Bass and she does some sick artwork which is available for sale in DAAPs Merchandise. The other meat frenzy butchers are Eric "Zerø" Bergen on Drums which make your heart literally beat out of your chest. He also is on Guitar, does vocals and produces. For our final butcher, meet Regulo "Ragz" Junior, on Guitar and Background vocals. Now that we have met the butchers of Sweet Meats Slaughterhouse, let’s see what has been on the menu.
For today’s choice cuts we have “Rise With Me.” This song is for the blood thirsty, brainsick, non-compos-mentis. You want a song that will twist your head around like the exorcist, this would be the one. For the other mind altering butcher slabs we have “God Complex”, with a delectable heaping serving of twists and electronic programing. If that doesn’t tickle your wishbone, How about some OFH Prime Cuts which you have “Six Feet Lower”, Perfect for the mastermind contemplating his every move as he’s searching for his next victim, You’d expect to hear this on one of the many “SAW” movies, or maybe one that Rob Zombie directed and produced. The sound is injectable and slithers deep into your veins. If that isn’t your forte, Have some “I Will Suffer”, Bit more of an upbeat song that has such a variety of twists and turns and crunchy tastiness to it.

Well now that you are uncontrollably slobbering all over your keyboards reading through the menu, Imagine what DAAP has in store for you. Dead Animal Assembly Plant is currently in the final round for The Vans Warped Tour on June 3rd, 2017 at Hawthorne Theater in Portland, OR.  If you’re up in that area and can catch this show, I employ you to do so. I just also read that the butchers are putting out their first ever comic book, sounds like Sweet Meats Slaughterhouse is soon to be a household staple that will even entice the most cannibalistic taste buds.
WHEW, if that wasn’t enough to contort your precious sweet sense of reality and rattle your inner core. My industrial metal lovers out there, this is ONE band you really need to add to your collection, and enjoy what the butchers have served upon you with DEAD ANIMAL ASSEMBLY PLANT. 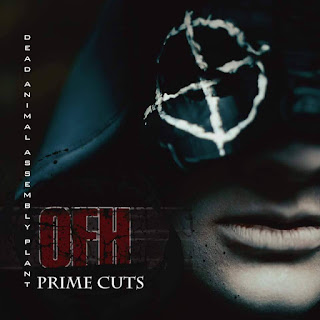 Sink your teeth into their official video for “RISE WITH ME”:
https://www.facebook.com/pg/DeadAnimalAssemblyPlant/videos/?ref=page_internal
I hope you enjoyed the tour of the slaughterhouse, Make sure you come back for more.
Band Insight Review BANGS! DAAP Dead Animal Assembly Plant Prime Cuts Slaughterhouse