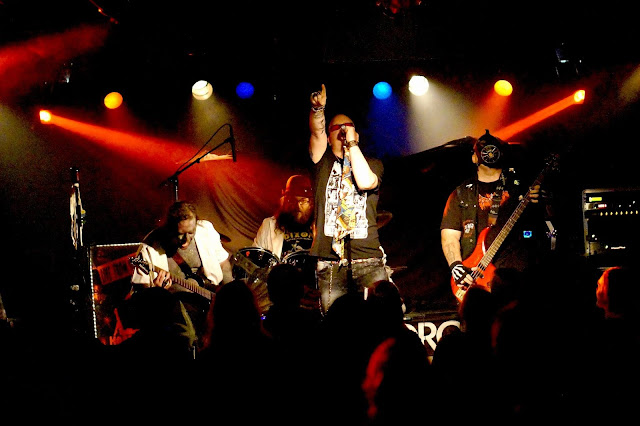 Hi, my dear Wicked Wednesday fans. When I heard this band 13 Nails, I was expecting another 'Southern Rock' band. What I ended up with was a sound that took me back a few years and I thought of a Southern sounding Motorhead. Wait! What? Motorhead you say? Yes, my friends this band really has some heavy vocal influences with a biting flare of Alice Cooper, Misfits, and a slight flash of Wednesday 13 mixed in there.

From hearing their few songs they have out, they produce a sound that is a rare breed. Starting in 2012, 13 Nails was born not only as a vision for Johnny Bones but also as a fulfillment for his love of old horror movies where he could combine darkness with Gothic to produce stories of a different vibe. Johnny recruited Grey Jones (guitar) along with Joshenstein (bass) to venture along his vision to create 13 Nails. As with most bands, times would change and bandmates come and go as it did with their drummer choices up until 2015 when Mark Giard (Drummer, DR MARK) joined along for the ride and 13 Nails then was whole and could show their worth in this twisted world of music with their unique stage presence.

Opening for some of the biggest acts out on tour from +Dope+, John 5, Pop Evil, to recently Gemini Syndrome. Quite the impressive resume for a band that’s young still.

13 Nails hails from Fort Collins, Colorado. It seems a lot of hidden talent is coming out of that great state. Havok, 13 Nails, Velvet Acid Christ, just to name a few. I never expected to hear a dark Gothic southern sound from 13 nails.

The stories Johnny spits from his tongue and from the depths of his belly is just intoxicating. You get drawn in with the deeply twisted vocal spikes and guitar riffs that are harmonic and hypnotizing.

13 Nails will be out on tour come October, follow them to get your city dates. Please check their website out, Give their videos on YouTube a twirl, and check out their Facebook page for further information on this band. I really think you'll hear what I hear.

Official Video For "Screams from the grave" https://www.youtube.com/watch?v=7rLIrONR_IU

For now this redhead is going to back into the graveyard and venture through more metal to bring you. Next Wednesday will be a very special band I am going to highlight.


If You have any questions for the band or myself, Hit me up.
Wicked Wednesday. Where metal gets wicked
Eyesofjadephotography@gmail.com