Wicked Wednesday Interview with: Connor Garritty of ALL HAIL THE YETI

Song River: The track "Feed the Pigs" seems almost punk in nature to the political climate and general world leaders.  Does the band normally speak out about social injustices?  How far do you involve yourselves on a personal level outside of creating music in today's workings?

Connor Garritty:  "Feed the Pigs" is more of a cry for help. Our world is deteriorating at an alarming rate. Humans either are in denial or they want to pass the blame onto someone else. We are all to blame, including me. It takes such small things to make a big difference and I think as a species we need to come together and change as a whole.

I have become more aware of my surroundings. Making a conscious effort to be a better person. Holding the door open for someone. Picking up a piece of trash. Not throwing trash on the ground. Recycling. Helping someone in need. These are all things that are so simple but humans have become so disconnected to the reality around them that they forget how to really help!

Song River: There is an art to metal and creating a sound that is discernibly your own. Where would you place what you create on the surface of the rock to metal missiles?

Connor Garritty: We've always tried to stay away from genres. Or place ourselves in some category of what rock or metal is supposed to sound like. Following trends or doing what is popular is not what we are about.

The four of us come from so many mixes of music. Not just rock or metal. We use our experiences and influences to help guide us rather than orchestrate what we do. We want to create music that we love as well as our fans.

Song River: Curious about his 'Conceptual Video Series' can you talk about how it came together and how it threads itself and why the pursuit of creating such?

Connor Garritty: The concept to tie the songs together wasn't something that we planned to do until the music was written for before the flames. As it was finished and it was time to put lyrics to it I thought that it seemed to tie in really well with after the great fire from the first album. A story is told in reverse if you will. Daughter of the Morning Star was the last of the three to be released. But it is the beginning of the story. Before the Flames picks up where that leaves off. And After the Great Fire is the conclusion to the haunted tale. 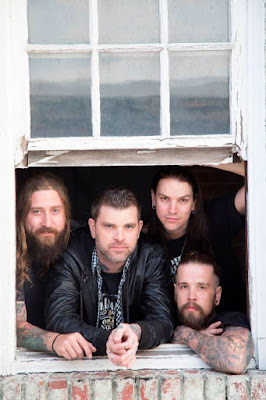 Song River:  You have gathered to yourselves a couple of sponsors for this tour: Schecter Guitar Research and Black Hope Curse Clothing. How did your relationship with both come about?

Connor Garritty: We have been using Schecter guitars since the beginning phases of the band. They've supported us since day one. So we wanted to try and give a little back by promoting for them in any way we could.

Black Hope Curse have been endorsing us for a few years now. We love Their imagery and what they stand for. Freedom of thought. Freedom of oppression from organized religion.


Song River: What is it sponsors bring do you feel to metal bands touring ventures?

Connor Garritty: Well in our circumstance, Schecter gives us guitars to use. We support them, take photos with them, speak to them in interviews and hopefully the end result is our fans purchasing their guitars. It's a big cycle I guess. They help us help them and vice versa. Same goes for Black Hope. We wear their t-shirts live, in interviews or just everyday use. It gets their name out there more and puts cool clothes on our backs.

Song River:  Reading your bio description it states 'Southern rock-influenced metal hybrids' where is home? How do those influences carry over to All Hail The Yeti?

Connor Garritty: Home for us is Hollywood Ca. Three of us grew up in Canada. Our sound is a product of the music we grew up listening too. I wanted a bluesy heavy southern sound because that's what I love. I think the term southern metal is coined because of the riffs and tone of guitars. Again our influences come from so many different genres that span the globe. It's hard to pinpoint what bands actually stick out in our sound.

Song River: This tour, Screaming Black Curse, almost feels like a precursor to something you are working on.  What is on the agenda after this western states tour and on into 2018?

Connor Garritty: We have tour prospects for late summer into fall. When this tour finishes we will be back home writing for the new record. Hoping for an early 2018 release!

Connor Garritty: That's a hard one. There are so many influences and so many genres being played by so many people of all ages. It's great to see that it has spanned across so many barriers. All we can hope is it stays alive and well. We all need to nurture the heavy music community. It's all in our hands. To make sure that it never dies!!