Current Events is a four-piece indie rock band from Cincinnati, Ohio. The band is also playing its hometown's Ohio's Bunbury Music Festival.  The band answers questions ahead of their performance. 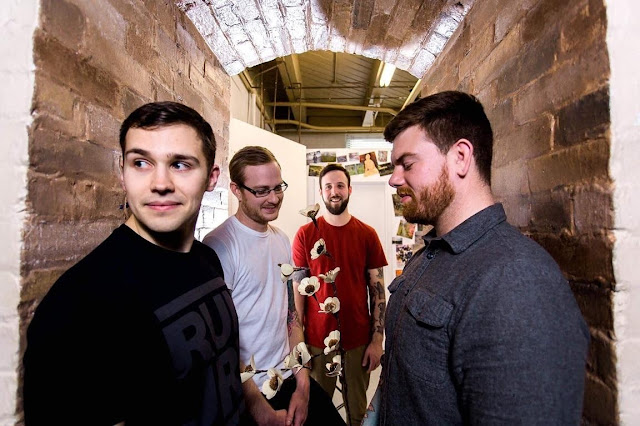 Jackie Cular: "How would you describe your sound to new fans?”

Current Events: "The best comparison would be a new way of capturing the same early 2000's emo sound that we grew up loving."

JC: "What song of yours best represents your overall sound and why?"

CE: "'It Might Be Best' probably captures our sound the best.  It has a lot of intricacies and parts that can get a little dirty, while still being bright and simple.  Pretty but gritty."

JC: "Tell us about your new song, 'Cupboard' and what inspired it?

CE: "Musically it us very much inspired by the band Copeland.  Their early albums have had a huge effect on us.  Lyrically, it's about moving on and picking up the pieces after a serious relationship or life change and how to get past it."

JC: "What's the progress of the music video and who came up with the treatment for it?"

CE: "Music video just finished last week and should be released right before BunBury (hopefully).  It was a mix of us, Daniel Chimusoro from the band Daniel In Stereo and Cory Woodruff.  Those guys do amazing work and are a blast to work with."

CE: "It really varies.  It always starts with someone, usually Jake, bringing a riff or melody to practice and then we all write it as a band from there.  Our biggest thing we try to accomplish is making the song stand on its own musically before adding the vocals."

JC: "How do you go about choosing your setlist for BunBury?

CE: "We tried hard yo focus on key and tempo change, as well as picking the right order to let everything breathe and flow well.  It can't feel stagnant for an event like this."

JC: "How do you plan on getting the crowd going for day two?"

CE: "We will be there on Friday and then Saturday morning promoting and meeting as many people as we can personally.  Our band tries really hard to be genuine and speak to as many potential fans and good people as we can.  We aren't the kind of band to ever feel too cool for that."

JC: "You're a relatively new band, so how do you plan on leaving a lasting impression with concert-goers?"

CE: "We do our best to first and foremost perform our musically well.  We want to make sure that everything we record translates exactly to a live stage.  We are big on making sure we seem as genuine and honest as possible."

JC: "With BunBury, you're on the same roster as Wiz Khalifa, Muse, and 30 Seconds to Mars--how wild is that?

CE: "It's absolutely insane.  Really is crazy to see us on the same flier with some of our biggest influences growing up.  Death Cab For Cutie was such a pivotal part in us growing up, it's just really hard to describe how it feels to see our name on the same flier."

JC: "The band is local to Ohio. What hotspots would you recommend bands or fans check out while they're in town (or in state)?"

CE: "OTR, Over The Rhine, has been totally revamped and has awesome local bars and restaurants.  Cincinnati is known for Skyline Chili and craft beer, so obviously try a lot of those if that's your thing."

The band's new single "Cupboard" will be a part of its newest EP, which will arrive this fall. Follow the band on Twitter @currenteventsband until then.