Up Close & Personal with Paul Johnson

Song River: Life has her fair share of hard knocks. We either deal or we don't. First of all- is music your outlet for release from life stresses or is it more of a storytelling of life observances?

Paul Johnson: It's a bit of both.  Life is mostly about dealing with one hardship after another. It's easy to get in your head and be overwhelmed. Most of us aren't raised with the right tools to manage it all. Especially when you're young. Music was my absolute escape, but not just alone in my room. Songs would play in my head on the bus, and in the classroom. It was my identity.

Song River: Second- At what age did you find yourself writing and such to help express only what could be through this outlet?

Paul Johnson: I started trying to right early on. I think I wrote my most memorable song at 16. I can still play and sing it.

Song River: Your music caresses the heart of American living at times. It almost brings you back to the early days of John Cougar Mellencamp and Bruce Springsteen. What is it about those childhood days...if you would 'glory days' that folks connect with? It's comfortable, familiar feeling music.

Paul Johnson:  You're only a child once. You only learn to drive once. You only lose your virginity once, then you grow up, and sometimes music brings you back to those big moments, but when it's really special, it can help you remember the small moments you didn't notice at the time but helped shape your life.

Song River: Music nowadays seems to be bought and sold like Wall Street commodities. All dressed up to look like something good, but it is really a backroom late night dalliance. Do you feel it is time music took back some of what used to be 'real' and honest and bring the listener back in to stay for a long term relationship?

Paul Johnson: Without question. A long term relationship is hard work. Lots of blood, sweat, and tears are put into it, and if you're lucky it lasts. Unfortunately, nothing seems to last, and everything is wanted quick and is thrown away more quickly. I quote Chris Rock "Here today, gone Today...." as an artist I romanticize a time when an album or artist was the soundtrack to their life.

Song River: You worked with Tuk Smith on this debut/album. How did Tuk become involved and how did you connect?

Paul Johnson: Zack knew Tuk from way back, and they had recently connected again due to social media. When I and Zack got ready to make the record it was a no-brainer that we wanted him to produce it. He understands Rock n' Roll and has a passion for good music. We hit it off immediately.

Song River: When working with Tuk how did that jive? Did he advise passively or was there a general meeting of the minds in developing each step in the process?

Paul Johnson: Both. At first he didn't know where to take it because all I sent him was shitty voice notes of the songs. So when we got to his room to work and hang the songs it all began to make sense. We put a lot of work in a short amount of time. After pre-production it was literally four songs in four days, mixed, mastered out the door. We didn't waste any time. We let the songs, and performance speak for themselves, and just prayed folks got what we knew was a raw emotive coming of minds.

Song River: Do you feel covering the former hit by John Waite "Missing You" was a well-calculated choice and why did you sense this was the song that should be the 5th track available by digital only?

Paul Johnson: I never believed it would be on the album even as a download only because it was done so late. Like the 11th hour late. Management tossed the idea of a cover tune around. We were apprehensive at first, but Zack seemed to have the perfect one. It turned out he was right. The hard part was making sure we didn't change the song. We just wanted to do it justice, and also make it the about last nights.

Song River: Has John Waite heard it and if so, what was his response?

Paul Johnson: He has retweeted the video twice now. Said it was strong. I think he likes it, and we are still floored by that. 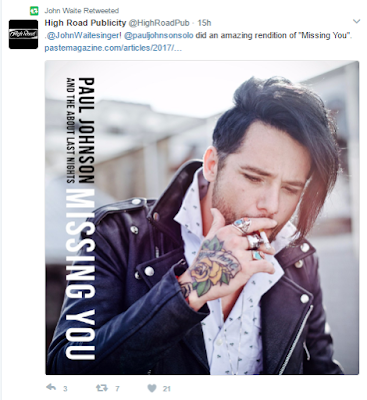 Song River: This industry is wide open and the opportunities are plentiful. How do you Paul see yourself and the band mates flowing into this monstrosity of ways to get your music heard, loved, and maybe even make a little bit of bank?

Paul Johnson: There is no real formula anymore that's not cheapening and watered down. All we really know to do is keep playing music, and get it to as many who will listen. I hope to see us on tour soon, and not working day jobs.

Song River: If you would Paul share with your fans a bit of 'off road' information about yourself.  Where did you grow up? Who were some of your heroes growing up (music and otherwise)? How old were you when you first picked up an instrument and do you still own it? Downtime favorite things to do? Brand of cigs you smoke and have you tried to quit?

Paul Johnson: I grew up in rural Jones County MS. I often tell people it's a one store, two church kind of town. Nothing to do but work. I wasn't into sports so when I heard Nirvana I knew right then I wanted to play music. I got a really cheap Fender Squire. I beat it to hell, and back until it wouldn't even carry a tune. I would set in my room at about 14 playing all day. I would just run off the bus when I didn't skip school and play. Passion was always a virtue of mine.

I do smoke, it's a recent thing. I hope if I give this folks press they'll send me a check lol!!! American Spirits...

Song River: Lastly, at the end of at all looking way out to those golden years... what is the one thing you never want to say to- "I wish I would have..."

Paul Johnson: Made another record. 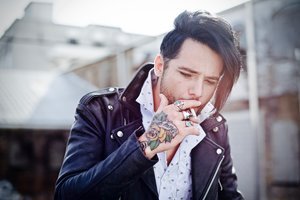