WICKED WEDNESDAY PRESENTS- A Concert Review: TOUR OF DIMENSIONS – XANDRIA, Along with Her Guests, KOBRA & THE LOTUS, ONCE HUMAN, VARKAN, HAZEN, PYROTECHNICA. 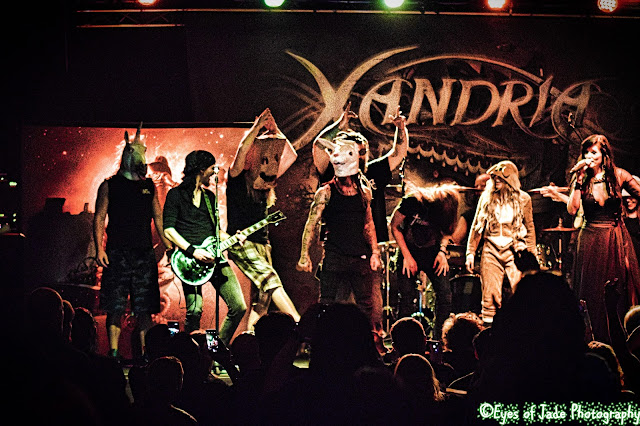 Hailing from Germany, Canada, and the USA, Every one of these leading lady bands has talent in many forms. Some of it is Operatic, Progressive. Some of it is a natural flow that has a natural vibrato to it and this night was just getting started.

The venue was at Club Red in Mesa, AZ on May 30th, 2017. The crowd was not large, however, there was another large headliner show in town as well. Some people don’t know about European Operatic Metal. It is rarely ever seen over in the states and I wish it would rear its head more often here. There is nothing like seeing a beautiful front line woman that is dressed to impress and can sing without effort maintaining her control of range.

I know many of my metal head fans are possibly thinking, “How can you like Operatic Metal?” “That’s not metal music”. It is something you either really get into or you don’t. I was so mesmerized by Xandria leading Lady Dianne Van Giersbergen which is from the band formally EX Libris. The octave range that Dianne can hit is mind boggling.  She has such control and ease of flow with gracefulness and clarity when she is onstage singing.  She has the voice of a siren and an angel taking you through a storybook fairytale.

Engaging with the audience is huge and that’s what every single band did that night. I was so impressed with this entire lineup.

KOBRA AND THE LOTUS – Something about this entire group is just WOW. First off I have to tell you that Kobra Paige is beautiful. I’ve watched her in videos and to see her in person. She is just as beautiful.  Hailing from the Great North of Canada, Kobra Paige, Jasio Kulakowski, Brad Kennedy (Which also filled in as a guitarist for Xandria that evening) and Lord Marcus Lee, all came out on stage. Kobra and her classical edgy sound started the night. I looked at Kobra in such amazement never understanding how this siren like voice come out of these women. It truly is a treat to hear Kobra. Her entire band works so well together as a whole, it’s no wonder they are a rival in this heavy metal era. 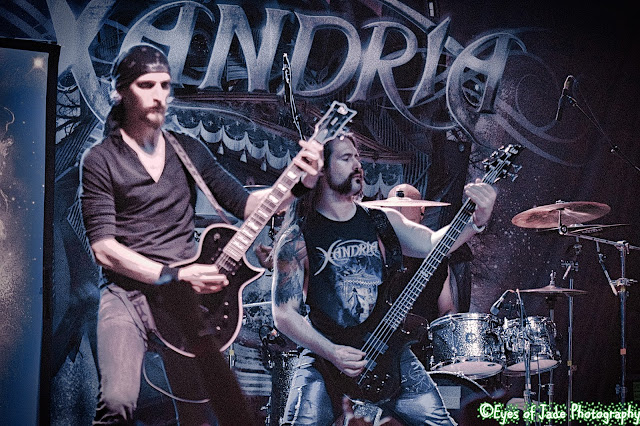 I love Kobra and the Lotus. Hard metal riffs in the background, Progressive, Sometimes Gothic sounding. I have always been in awe over lady singers because it takes a lot to be in this more male dominated industry. To have the vocals where a woman can come out swinging hard hitting, then change to a softer fairytale classic range, That is not something that happens overnight. That’s pure talent.  I met Kobra Paige after the set and introduced her to my friend that was with me that night. He asked her a question,” Who are your vocal influences?” She replied, “Led Zeppelin, Judas Priest”. Who would have thought? Led Zep and Judas combined? You could hear some of that Judas Priest influential in her performances at times. If you are lucky to catch Kobra and the Lotus on tour, I highly recommend you do along with her Alice in Wonderland crew.

ONCE HUMAN- Unfortunately, did not have their leading lady perform because of an illness. Lauren Hart, I hope you get to feeling better. You were highly missed not being able to grind out those deep metal growls you are so well known for. The band Logan Mader, Skyler Howren, Damien Rainaud, and Dillon Trollope and Max Karon still took over the show and had the crowd in their control. Lauren got to watch the guys play and I know how much she felt she let the crowd down, but she did not. There was a stand in a male vocalist who attempted to entertain and did quite well I might add.  I hope in the future to catch more of Once Human and see Lauren perform her vocal magic on us all. Get better soon.

VARKAN-  was a band I missed, unfortunately. Sorry guys, I’ll catch you next time. I heard you put on a great performance though.

HAZEN- a Local band from Phoenix AZ, Fairly new to the scene. Powerhouse lead vocalist, Kayla Marie Hazen along with Dillon, James, Tim that makes up the band Hazen. This is a band my wonderful friends that are into Metalcore/ Progressive sounds. You will like this young band. Kayla has something that is hard to train for and it comes naturally Vibrato. I myself am a classical musician and learned how to control my vibrato. It is not something you can have that comes and goes. You have it and you learn to control it. Kayla does that. I really am expecting this group to break out into the local scene and bring her talents forward. You need to see these guys live.

PYROTECHNICA- This band brought a different sound to the stage. Traveling from Tucson, AZ to share the stage that night. My suggestion to the band is to work on pitch, and command of your instruments along with control of vocals. Was I really quite confused over this group wanting to be techno/alternative or Progressive alternative? They will grow I am sure. I hope to watch them more and see how they do build as a group together in all aspects.

There were a whirlwind of vocal ranges, pitches, siren-like, almost angelic vocals, along with mind blowing performances from several bands. Of course, throwing in some fun was the other band members coming out on stage in masks, and doing Y.M.C.A. to Xandria song “We are murderers.” It was an Alice in Wonderland moment for sure, unicorns, kangaroo onesies worn by Kobra Paige, White Rabbit mask worn by  Logan Mader, along with others It brought laughter to everyone. 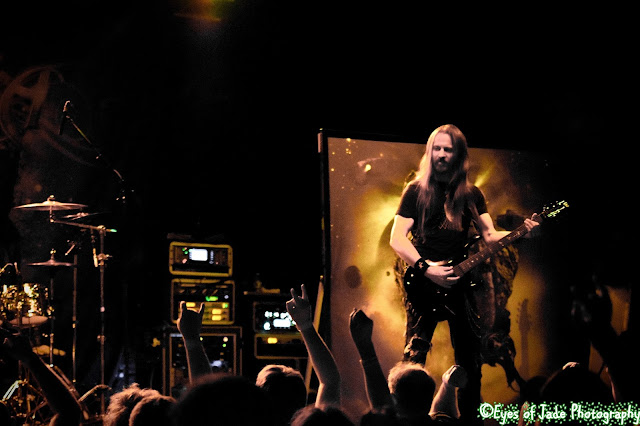 This was the end of the Tour of Dimensions for Xandria, Kobra, and the Lotus, Once Human. It was a great evening especially when you hear a crowd of maybe 200 calling Xandria over and over, her name echoing for an encore. Of course, Xandria (Dianne Van Giersbergen) was not about to let her fans down at all.  She came back out in her long black shiny skirt, black corset, and gave the audience what they were craving. Another lyrical lullaby only an angel could sing. The night ended and it was time for everyone to part ways. The show was a success I feel as you could experience a different realm of metal. Whether you want to call it Progressive, European Operatic, Metal-Core, There was a variety for you to experience all of these genres. I can’t wait to see them again. 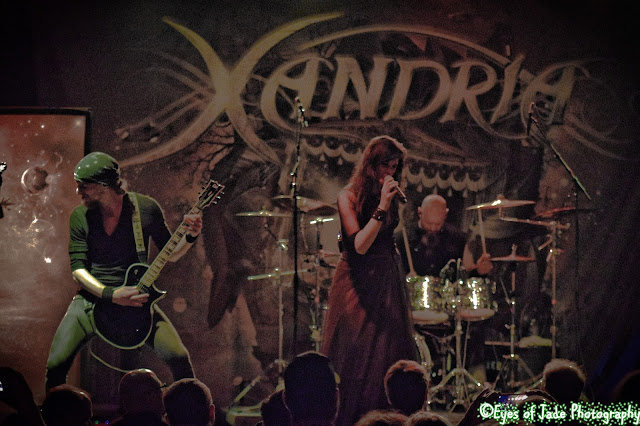 My Wicked Wednesday fans, I hope I fulfilled your weekly thirst for metal insights, along with dishing more your way next Weds. Keep your horns up, and Metal Alive.  This redhead is headed off to another adventure next weekend about my trip to Vegas. That’s going to be a great read. Please give the above bands some love and respect. Find them on Facebook, Instagram, YouTube. If you’re lucky enough to catch them in a city near you, Please go see them. Xandria, Kobra, and the Lotus, MIND-BLOWING. You will be super surprised by these ladies. 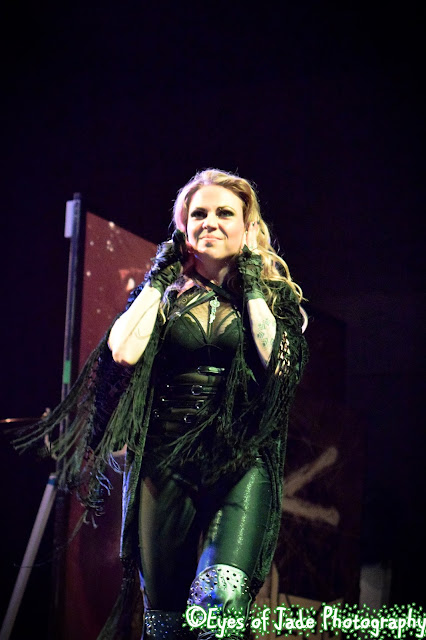 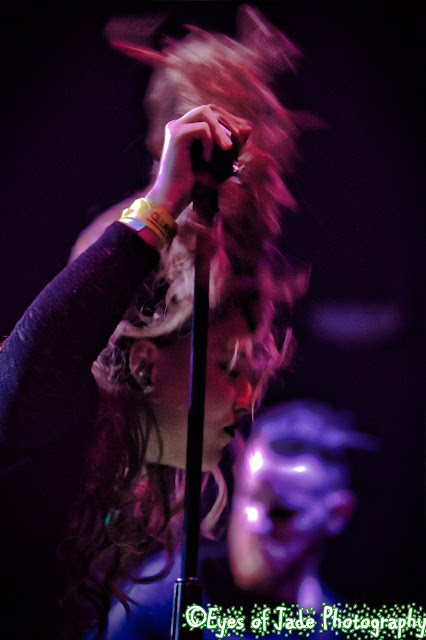 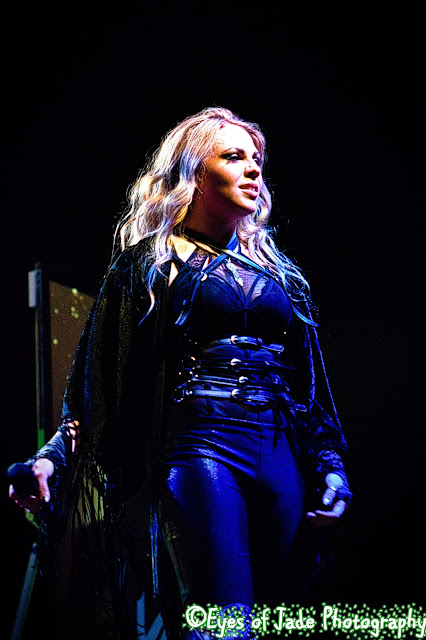 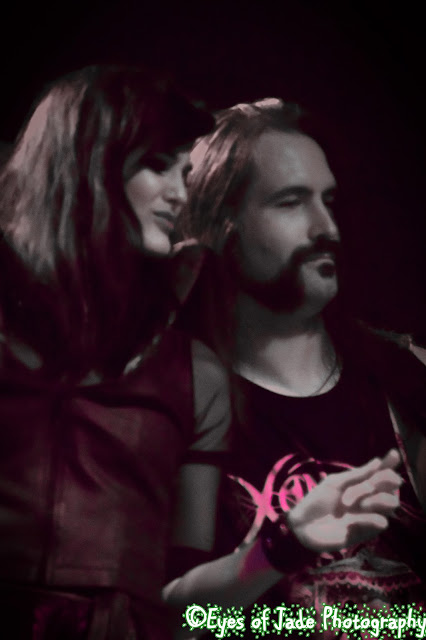 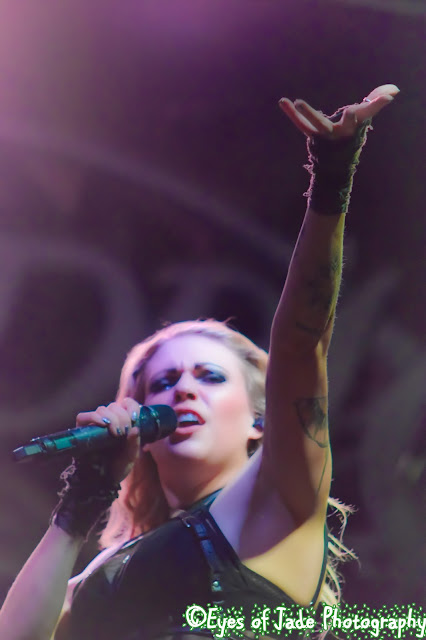 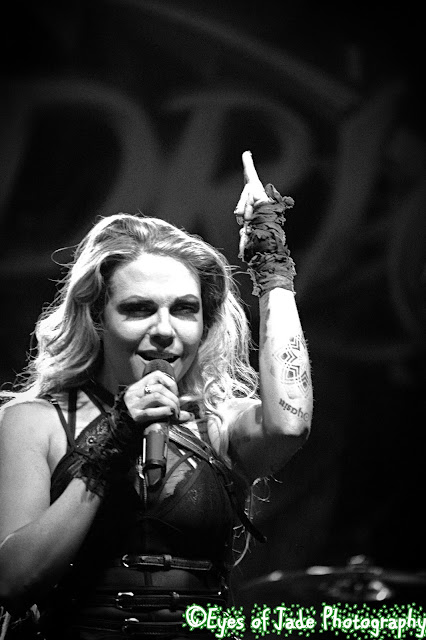 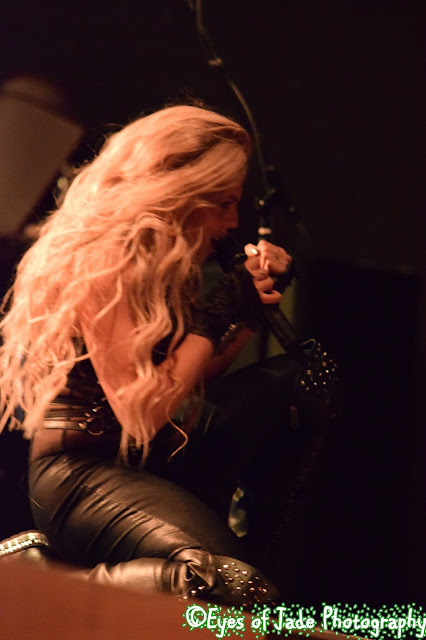 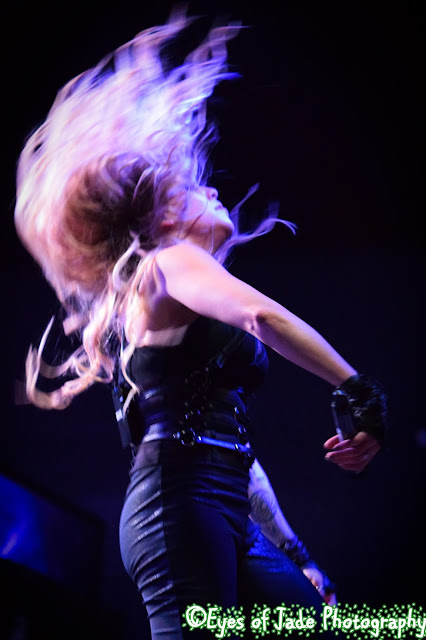 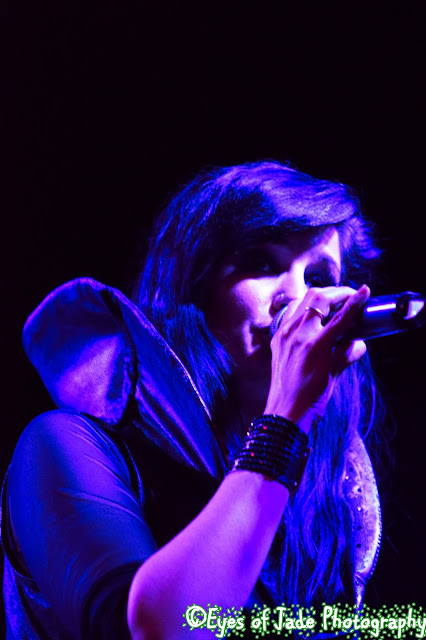 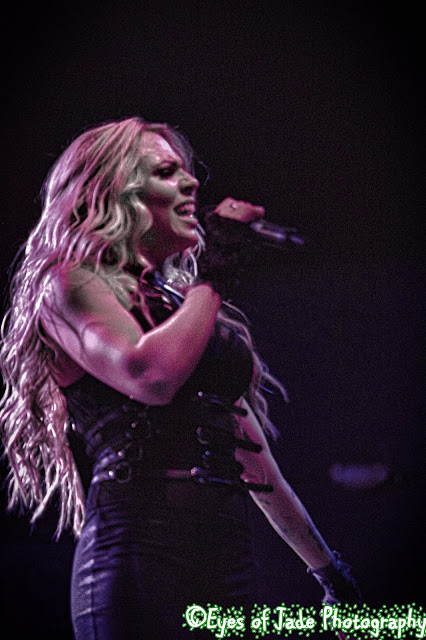 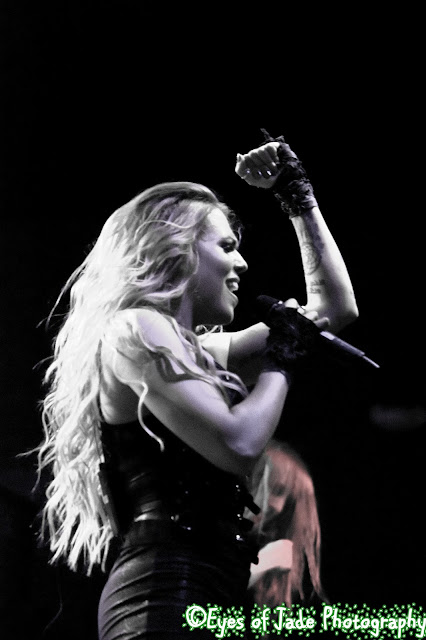 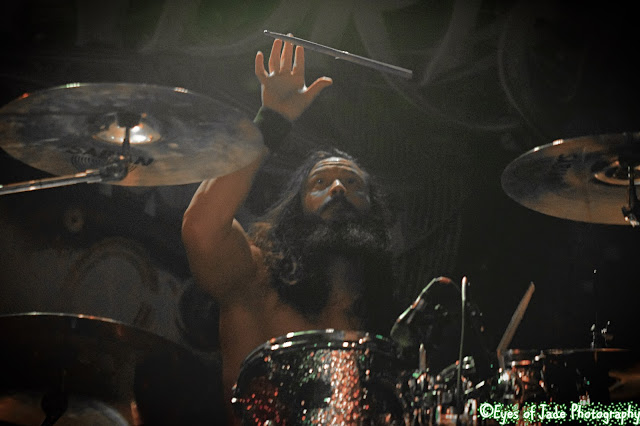 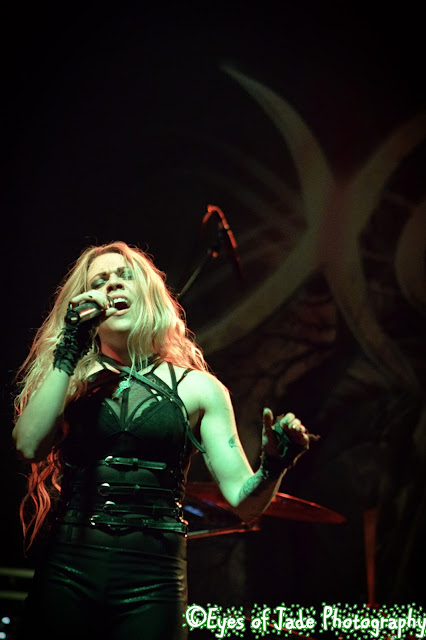 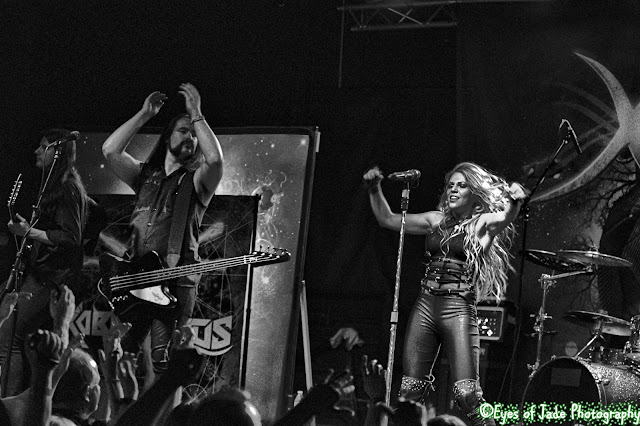 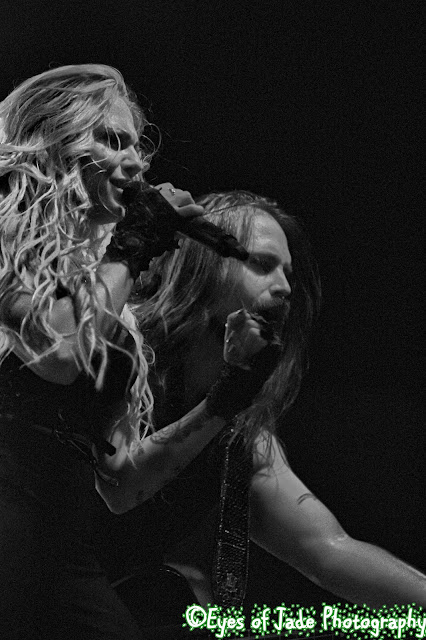