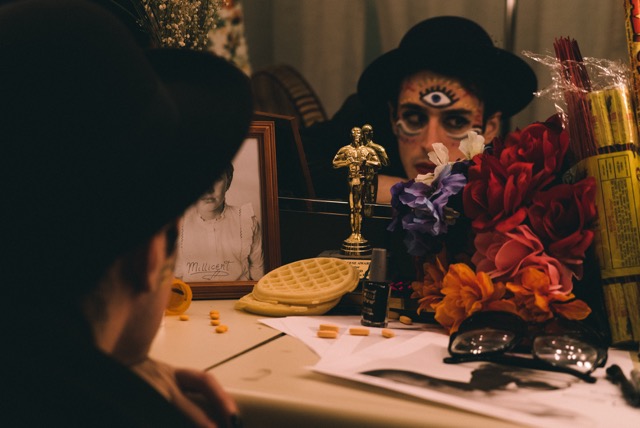 Song River: Does our mixed up world still embrace the avant-garde? Are they still open to the glam/cabaret/perfunctory deluge of 'outside the norm' rock n roll?

You can come like us before we’re cool on August 11th at Roxy & Dukes, for the recording and filming of our upcoming live album/concert film. Part One, The Real Will Wood, sold out in a matter of weeks, and The Real Will Wood Part Two: The Real Will Wood and the Tapeworms is already halfway to sold out, and you can snag tickets here: willwoodandthetapeworms.bigcartel.com/category/tickets


SR: Reason for the oxymoron is it seems we are a minimalist effort society at times, yet we bombard ourselves with yelling about whatever makes us angry. Wondering truly how much of this opposing and conflicting at times societal attitude is playing its part on the music scene. Your thought possibly more in-depth?

Will Wood: I looked out my back window today and there was a small androgynous child wandering around my yard in pajamas with a pair of hedge clippers just singing some old tune. I think it was from “Hello, Dolly!” but I’m not entirely sure. Maybe it was “Oklahoma.” Either way, the thing is still out there and somebody better pick their fucking kid up or I’m gonna start taking potshots with my BB gun. You know what I mean?

The burgeoning sun still casts shadows of our past over breadcrumbs we’ve left in our wake. Much like the borrowed light of the moon, we are merely reflections of the center of everything. There is a paradigm shift upon the twisting horizon and we will greet it with filthy hands and rusted teeth on its winding trajectory of fear on August 11th at Roxy & Dukes.

SR: Are Americans, is the world looking for a Cult Hero again? Something larger than life but still attainable to inject themselves into.

Will Wood: I have seen the light until blind, and used nothing but echolocation and my inner radar to navigate the path to the Truth of All that Is. Wielding my pineal gland like a diamond cutter, I will guide the sick and ashamed to the boundaries of reality and push them over the edge of the map like a baby bird from the nest. Humanity seeks beyond their means.

In other words, I hope so, ‘cause my daughter’s gotta eat and I can’t afford my medication anymore. Buy tickets to August 11th here: willwoodandthetapeworms.bigcartel.com/category/tickets


SR: How does WWATT include the masses?

Will Wood: Y’all are all invited! Tune into these vibrations, hep cats, come get your kicks with the in crowd. I also ain’t above selling this here soul if some suit with a hot stack is buyin’.

There’s this sick notion going around that somehow “the masses” are too thick to pull their head out of the top 40 stations and try something new. They’re not, they’re as sick of the same old thing as everyone else. We all want novelty- it’s the reason people do drugs, have sex with strangers, go on road trips, and do drugs. We just don’t always know where to look. Put me on blast I’ll show you that the you can still get down to the beat of something off-beat.

Great opportunity to do that would be August 11th at Roxy & Dukes, featuring Gypsy Punk giants Bella’s Bartok.


SR: How many different things are taking place simultaneously in the music video “Hand Me My Shovel, I’m Going In!”?

Will Wood: Define “things taking place.” What I can tell you is the lovely ladies on the trapeze hoop are joining us with their high-flying circus act on August 11th at Roxy & Dukes. Hanging from the rafters, contorting, spinning, kicking me in the head. These thrillingly skilled creeps are bringing spectacle to the stage- the whole thing is going to be shot in 4K HD with Hi-Fi sound and Sci-Fi lights. GET YOUR TICKETS TODAY!

SR: The meld with Mark Jaworski really solidified this project. How did you all connect/meet and give us some inside details on the original meeting, and what transpired while creating this flick?

Will Wood: Mark is a real worldly spirit, and an otherworldly character. We’ll be getting together to eat a block of sandstone he stole from King Rameses’ tomb and absorb the nutrients of its history sometime in the next couple of weeks. Drenched in homemade marinara of course. Hopefully his feet aren’t still all cut up from the broken glass he stepped in during the shoot. Lots of smoke and lots of time spent trying not to choke on confetti or let too much glitter get under our eyelids.

Which reminds me, I almost forgot: if you like glitter, chaos, and blood; come see us at Roxy & Dukes on August 11th! Tickets are on sale now from willwoodandthetapeworms.com !


SR: What is it about those Jersey musicians that make them march to their own unique prowess?

Will Wood: We’re soaked in an over-saturation of one-dimensional hardcore screamers and pop punk whiners. Knee deep in banality and what’s been done a thousand times. The genres aren’t exactly taking new submissions right now. But if you look in the right places at the right times, you can hear some genuinely unique original acts blossoming on the scene. What’s got them popping up? Maybe there’s something in the water. Maybe it’s the pressure-cooker culture that’s twisting people’s heads until they can’t help but express something entirely different. Maybe it’s the growing drug problem.

One of the right places and right times is ROXY AND DUKES ON AUGUST 11TH WILL WOOD AND THE TAPEWORMS ARE PLAYING A BIG OL’ SHOW WITH A 9-PIECE BAND, TRAPEZE ARTISTS, AND BELLA’S BARTOK TICKETS ARE LIMITED FOUR HAVE SOLD SINCE I STARTED ANSWERING THESE QUESTIONS AND THERE’S BARELY ENOUGH ROOM FOR 175 PEOPLE IN THIS PLACE. COME ON DOWN!!!

SR: WWATT is it a Clockwork Orange or more of an Alice in Wonderland movement?

SR: Are those Marks feet on the piano top?

Will Wood: Yup! Before they started bleeding with shards of glass from shattered religious candles sticking through his toes. Trooper didn’t even go the hospital, he just pulled them out with his fingers and tossed ‘em aside.

That fucking kid is still outside. Stay here, I’m getting the BB gun.

SR: How did the young lady's tattoo turn out?

SR: Is the universe ready for foreign scales?

Will Wood: Well we’re gonna find out on August 11th at Roxy & Duke’s! BECAUSE THE WHOLE UNIVERSE IS GONNA BE THERE OH WOW HOT DAMN YOU BETTER GET YOUR TICKET QUICK HOOOO-WHEE.


SR: When can we expect the release of this full project and what is next on the menu?

Will Wood: I can’t tell you that, unfortunately. May be releasing it through a pretty substantial international indie label. May be doing it DIY. Depends on the time frame. But as soon as it’s out… ANYONE WHO BOUGHT TICKETS TO THE REAL WILL WOOD PART ONE OR THE REAL WILL WOOD AND THE TAPEWORMS AT ROXY & DUKES ON AUGUST 11TH WILL GET A FREE COPY!


SR: Would you consider adding to your menu shrunken heads?


Will Wood: Not really my thing. 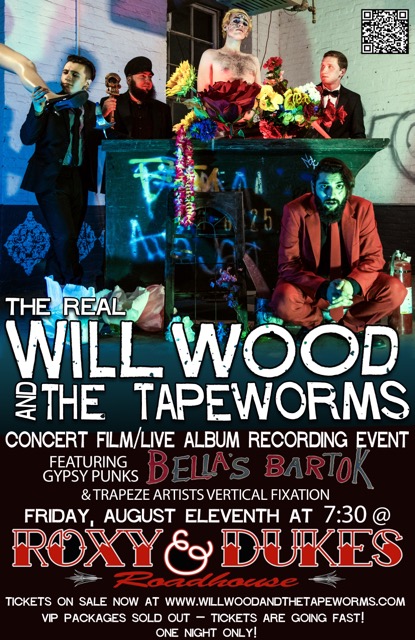