Country Rocker Jessica Hannan Kicks It Up A Notch! 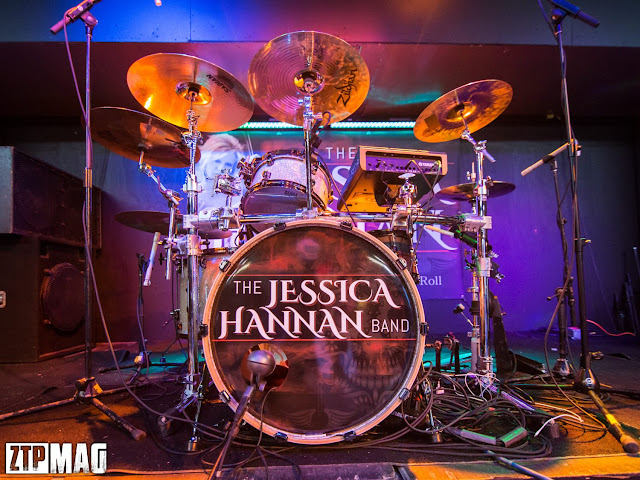 Ashley Rey: There really seems to be an all out- let it all go- feel to this song "Girls Night Out." Are you someone who can easily just cut loose and be yourself with your friends?

Jessica Hannan: Absolutely! When I’m out with my girls it’s hair down, music blaring and just enjoying life. I am this way on a stage too! It’s just my personality.

Ashley Rey: I think both sides have felt that sting of being stood up... it was great how you took the song though and lead us into triumph. That is really how it felt. Would you say "Girls Night Out" could be considered an anthem song in some ways?

Jessica Hannan: Sure! Every woman has felt the burn of being stood up or rejected in any way! Here’s to us ladies that turn a bad situation into a good time. We can choose to let things get to us or we just do us!

Ashley Rey: Who did you work with on filming this video and how much direction did you maintain over its storyline and presentation?

Jessica Hannan: The theme was my husband and I’s idea. A lot of the story plot was our idea as well. The film crew and production was all done by ZTP Magazine and they also thought of some great stuff to add, but as far as the story line and theme of the video was all us! 

Ashley Rey: Do you think yourself to be somewhat of a role model in this music industry Jessica?

Jessica Hannan: I try to be, obviously I want to set an example for women. It’s 10x harder for us in most avenues and trust me music is no different! I do my thing, if people love it then great! I know Country Rock isn’t for everyone. I work hard at what I do though and I have done everything in my career so far with no manager, no label. Strictly myself and my husband have managed my career! It gets to be a lot sometimes, but I love it.


Ashley Rey: Do you sense that women are becoming more and more respected as artists and being 'allowed' to portray certain emotions that maybe would have once only belonged to men musicians only?

Jessica Hannan: That’s a hard question. I understand the music industry on the inside. Truthfully it is extremely difficult for women to emerge in music at this time. There are 10x more male artists then female, esp in Country. That’s a hard thing to swallow, but it doesn’t stop me.

Ashley Rey: The Country and Rock sound- it seems to be making itself heard more and more nowadays. Who have been some of your favorite country/rock style musicians?

Jessica Hannan: I love Miranda Lambert and Carrie Underwood. Great women of Country music. I also love Lizzie Hale. I like blending the two genres. It makes for a fun time! 

Ashley Rey: Your energy when performing is engaging. How do you pull your audience in and help them become a part of the Jessica Hanna feeling?

Jessica Hannan: Thank you! One thing I have always tried to do is engage a crowd. Truth be known I am more so the one that gets engaged. I thrive on watching people feel music. How many times have you heard a song and it made you feel something? My goal is to sing and perform, but engage a crowd so they connect to a song and feel something. It’s an even better feeling when that song is yours. I keep a crowd’s attention by including them. No one wants to sit and hear a band and not feel connected. I do a lot of audience participation and I do something called a Holler and Swaller! Come to a show to find out exactly what that means! ;)

Ashley Rey:  Where do you see the country industry heading? Is it beyond just Nashville and the heartland?

Jessican Hannan: I see Country heading to more of a “pop” sound and that’s disappointing. I believe Country will always be centered in Nashville as it’s home, but I do believe a lot of areas are accepting Country more as it isn’t so cookie cutter anymore. I feel this is good and bad. I enjoy a Johnny Cash song, but I also love a rockin’ Miranda tune. I really do not like the pop edge it’s getting. I am hoping it comes back to it’s more country-country/rock foundation.

Jessica Hannan : These are great questions! I love it! The goal for the remainder of this year is to push Girls Night Out as much as possible obviously, but here in the coming months were going to be gearing up to record again. I want to keep that rock edge and steer people to emotions, to real life stuff! Nothing helps us more in life than being able to relate to something and feel a sense of empowerment through it. I hope my music can do that for people.