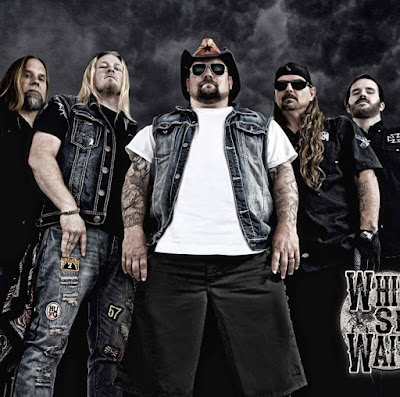 This week’s review is a bit different, as I am not doing my normal concert review with photos, rather I am introducing you to a very rapid, upcoming band that is catchy, punchy, hard hitting and sweet like my southern iced tea (Only way I take it).

May I have the pleasure to introduce you to WHILE SHE WAITS.  I’ve been offered to listen to a few of their songs on their self-titled album and upon the first song that played I was immediately blown away with the talent this band delivers.
I have heard MANY southern, punchy, riff ripping, rock n roll bands but, really none have caught my curiosity like this one has.
Do I have your attention yet?

Let’s meet the band, James Cole on Lead Vocals, Tim Rooen on Guitar, Award Winning Lead Guitarist Matthew Kohlman, Dave “Blood” Vessels on Bass, Gary Wells on Drums.  You put the five of these guys together in one room, you’re bound to get an earful of rip roaring, riff tearing, soul grabbing, nitty gritty rock with a bit of twang that grips into your flesh and doesn’t let go.

Their heavy mouthwatering song “My Way” is the most requested songs in Alabama sending WHILE SHE WAITS the Pepsi Band of the Month in February 2017.  Quite a few radio stations have picked this band up for some airtime. That says a lot for a young band that is breaking out. All the way from Arizona to Alabama, Who knows maybe even nationally, Nudge, Nudge?

I know, I know. You’re probably thinking, “Ok, so this is another Southern Rock band, what makes them different?” The answer is their uniqueness, punchy, earworm, rhythmic, melodic tones ranging from southern country style lyrics to hard, raspy, scratchy, deep vocals of James Cole all while the clear command of Matthew Kohlman on his guitar, and of course Gary Wells keeping rhythm on his set is just sex to the ears.

When I think of Diverseness, What do I think of? I think of one that can harmonize, hold a pitch, and not be bubble gum like many other bands are these days. You want this album WHILE SHE WAITS in your collection folks.  Each song on this LP is unique in its own way, to the point where I can’t pick one favorite, Even though right now I am playing “The Stranger” on repeat.

“The Banker”, I would say is the hardest sounding song from this LP and it’s catchy. If you are into the likes of Black Stone Cherry, Monster Truck, Bits of VOLBEAT, Killswitch Engage, Sevendust, Nonpoint, You will not be disappointed by this self-titled LP by any means.

WHILE SHE WAITS hails from Phoenix, AZ. Started back in 2012 with a dream. Now they are being endorsed by several sponsors, Dirty Tequila, Fishman, Ink Army, Marshall Amps, ColdCock Whiskey and many more. Not too shabby if I say so myself.

Sharing the spotlight, and stage with bands like Queensryche, Fuel, Linkin Park. This is one band that I see traveling nationally, and internationally gripping you into a rock n roll southern shindig that will take you along for that rollercoaster belly screaming good time.

Southern rock has always been a hard fine line to walk along, trying not to be hard rock, heavy metal and that fine line of country music, bluesy. When a band such as WHILE SHE WAITS plays with fate, they were able to come into their own genre of music. I call it Steel-blue Rock. It has that edginess of precision quality that carries only into bands of such nature as WHILE SHE WAITS.

Lyrically, every song While She Waits has meaning from the deeper of one soul bringing life to what that music means to each individual. It may not mean something to one, and mean completely different to another. Listening to each song this band has produced has made me appreciate the exceptional clarity and sound this band seamlessly combined of quality, and talent that this band possesses.
So now that I have taken you to the deepest realm of southern rock, how are you liking this band now?

Grab your finger licking bbq, sweet tea and a handful of napkins because you will be wiping your mouths off from drooling over the tastiness WHILE SHE WAITS leaves you with. Make sure Y’all come back now, ya hear?

For more information about WHILE SHE WAITS check out their Facebook page: