Based in the Duke City of Albuquerque, New Mexico, Break the Earth taps into an eclectic mix of metal approaches, from technical death metal and ambient metal to facets of melodic metal and even doom metal, to produce a distinct and modern style of their own. The band recently unleashed their full-length debut, titled Numbered Days, which is available to snag off bandcamp. Numbered Days consists of 12 tracks, each of which stands on its own yet contributes to the cohesion of an album proper. The band consists of Paul Sanchez on vocals, P. M. Duffy on guitars, Alex Camacho on bass, and Hiram “Beast” Viezca on the battery. I caught up with Duffy and Viezca, who let me in on the latest happenings with Break the Earth.


Tell me about your band name? What is the significance of “Break the Earth”?

Duffy: “I had a nightmare after reading the news about how the planet is heating up and nuclear war always seems imminent. We are all in some way doing our part to ‘break the earth,’ I thought. So, it was born out of my paranoia of some mass-extinction event we haven’t realized yet.”

How did you guys come together?

Hiram: “Duffy and I found each other on the Craigslist site. We were both looking to start a band, so we decided to meet at Midnight Sun Studio, owned by this real cool dude by the name of Tommy. I remember within the first two get-togethers or so we wrote the guitar and drum parts to the song ‘First Blood,’ so I knew we were going to work well together. Alex I’ve known for a long time, and he agreed to play bass. We had a hard time finding a singer.”

Duffy: “Paul was referred to us from my good buddy, Mindy, who knows or has met almost everyone who is a musician here in Albuquerque.”

Hiram: “I remember we met him at Midnight Sun and played the parts we had at the time for ‘First Blood.’ When this dude opened his mouth to sing, out comes this explosive vocal! I was, like, this is the guy.” 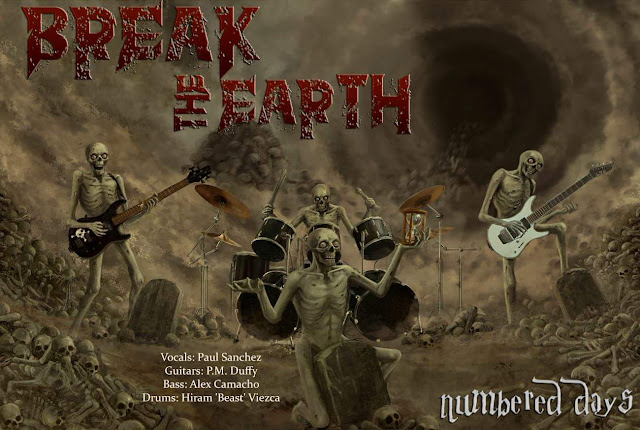 Hiram: “I really like what we write. We just write whatever feels right and sounds good. We have many different influences, from blues to death metal. What you get is a very heavy sound with awesome solos and a natural groove that anyone can get into.”

Duffy: “We have very eclectic influences. I probably listen to more fusion and punk rock than the rest of the guys, who are really knowledgeable about death metal. We absolutely must have a groove to our sound that gets the blood pumping. I get bored when every song sounds exactly the same when I see a band live. I didn’t want that with this band.”

Tell me about your full-length studio CD, titled Numbered Days. What can listeners expect to hear?

Duffy: “I think Numbered Days is a great introduction to the band. I feel like we are reaching for our potential. Every song has its own vibe, yet they all flow into each other. You can listen to it in parts or as a whole and it still sounds great, not just a bunch of random songs all over the place that sound patched together. Much of the credit has to go to how these guys put 100% into it. Most of Alex’s bass tracks and ALL of Hiram’s drum parts were all done in one take. When I listen to them I still trip out on that. Paul sounds terrifying. He really made this album work. It is an intense album of 12 songs that anyone who loves metal can appreciate.”

What inspired the song “Skin of Evil”?

Duffy: “It started as just a name from my favorite episode of Star Trek. I told Paul this and he wrote lyrics that really fit the topic—one of my favorite sci-fi villains ever.”

How was it working at Dement Ted Studios in Albuquerque?

Hiram: “Dement Ted Studios was great! Charlito is the owner/engineer there, and he did a great job on the album. Charlito has a great ear for sound and was very easy to work with.”

Duffy: “He deserves a medal for putting up with us. Consummate professional and a fantastic guy.”

Describe a typical song-writing session for Numbered Days. Would you call the approach a democracy, dictatorship, a republic, or a monarchy?

Hiram: “Song-writing is a very collaborative process. Everyone gets to put in their input. Usually, Duffy and I come up with a rhythm and Paul and Alex will fill it in as we go. Paul also records our sessions for reference later. I find that it helps to remember ‘that really awesome part that we came up with last week.’”

What can fans expect from Numbered Days when you perform live?

Hiram: “Fans can expect a high-energy, explosive performance! Fans want a show and will definitely get one from Break the Earth. All of us are very passionate about our music and it definitely comes through on stage. I like to say, what you hear on the album is what you’re going to hear live.” 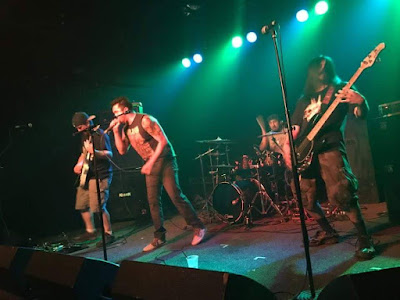 Do you have a favorite Albuquerque venue? Explain why.

Hiram: “My favorite Albuquerque venue is the Sunshine Theater. The sound there is fantastic and the staff has always been very easy to work with.”

Tell me about your personal approach to percussion, both as an independent instrument and how it contributes to the band’s signature sound.

Hiram: “I’m very passionate about drumming. I’m always learning new things and I like to be as creative as I can as a musician. I get to work with three very talented musicians in Break the Earth, so I do my very best to stay on my A-Game.”

Break the Earth: “Break the Earth will have their CD release party for Numbered Days on November 18 at Burt’s Tiki Lounge in Downtown Albuquerque. Tickets will be $5 at the door!” 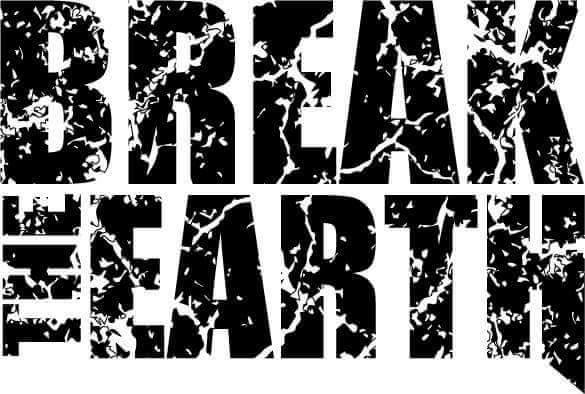