“Worship the ground, you barely walk on
You give of yourself but your angels are gone
Deny, your body is screaming
But your heart and your soul, they’re bleeding
Just to fall asleep is a godsend
Until your demons appear again
I am a witness to your demise”

Founded in 1981 by guitarists Scott Ian and Danny Lilker, New York’s Anthrax is considered one of the original “big four” of thrash metal, alongside colleagues Metallica, Slayer, and Megadeth. The band has expanded its sound throughout the years, influenced by alternative metal, grunge, and even hip-hop. To date, the band has released 11 full-length studio albums, as well as several live albums, compilations, and EPs.

In 1993, Anthrax released their sixth studio album, titled Sound of White Noise. The album was the first for new vocalist John Bush (Armored Saint), as well as the final album for longtime guitarist Dan Spitz. Sound of White Noise chronicled the evolution of the band from a thrash-driven unit to one influenced by grunge and alternative music. The album remains a solid thrasher, however, with tracks such as “Only,” “Room for One More,” and “C11H17N2O2S Na.” Other tracks are influenced by grunge, such as the opener “Potter’s Field,” “Hy Pro Glo,” and “Black Lodge.”

Inspired by the popular 1990s television series Twin Peaks, “Black Lodge” is the album’s slowest composition, a moody piece that showcases Bush’s vocal prowess. The song begins with a reverberating guitar, which is followed by some soft percussion and Bush’s light-handed vocal croon. The song builds slowly, primarily through the vocal, with the rhythm section becoming heavier and heavier while the guitars continue to show restraint. It isn’t until the middle of the song that the pace increases slightly, with the guitars coming into prominence and the vocals growing with intensity. The chug-chug-chug riff comes right out of grunge, but the complementary lead reveals a restrained thrash foundation. Twin Peaks’ score conductor, Angelo Badalamenti, helped compose this song, ensuring that its vibe was similar to some of the music on the television series. 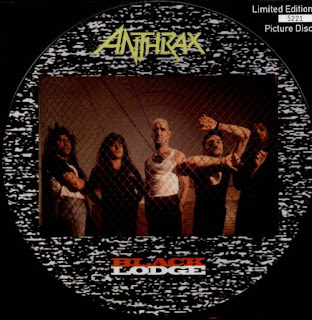 Lyrically, “Black Lodge” refers to a fictional location in the Twin Peaks universe. The song is an ideal representation of dementia expressed on the television series, which addresses how things look (respectable) and how they really are (demented). This theme is reflected in terms of sleep (as a means to break the veil between the two). For example, take the following lines: “Just to fall asleep is a godsend/until your demons appear again” and “Your biggest secret is one you can’t keep” “Lift up your head if you’re only asleep.” In the song, the “Black Lodge” is not only a location, it also becomes “the soul” or “heart,” as demonstrated in the lines, “Give me the one thing you can’t give me/Take me to the black lodge where you live.”


A music video for “Black Lodge” was produced to promote Sound of White Noise. The video features actress Jenna Elfman in one of her first appearances and tells a visual story while the song plays.


Anthrax Song of the Month Sound of White Noise

Areeba Shaikh (H) said…
White Noise Wow, cool post. I'd like to write like this too - taking time and real hard work to make a great article... but I put things off too much and never seem to get started. Thanks though.