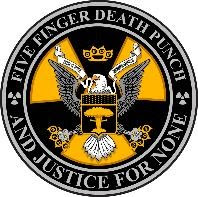 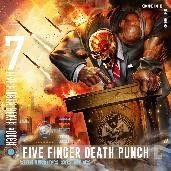 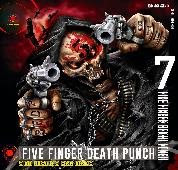 Today, multi-platinum hard rock band, Five Finger Death Punch, have announced that they will be releasing their highly anticipated seventh full-length studio album, And Justice For None, on May 18. The long-awaited collection is available for physical pre-order today in the following formats: Standard physical CD (13 tracks), Deluxe physical CD (13 tracks + 3 bonus tracks + Deluxe artwork), Vinyl (13 tracks + 3 bonus tracks + Deluxe gatefold artwork). The band is also offering fans a variety of new CD/merchandise bundles. The digital album pre-order for And Justice For None will launch on April 6th here. Fans who pre-order the new album will also receive an exclusive ticket pre-sale code for Five Finger Death Punch's just announced 32-date North American summer co-headlining amphitheater tour with Breaking Benjamin.
Five Finger Death Punch are thrilled to be hitting the road for a massive series of co-headlining North American dates with Breaking Benjamin this summer. As special guests, they will bring along two of the most exciting new rock acts in the world: 3X GRAMMY Award-nominees Nothing More and Bad Wolves who are currently dominating the #1 spots on the mainstream, Rock and Metal charts in multiple countries around the world with their cover version of The Cranberries' "Zombie". The video for "Zombie" has garnered more than 15 million views in 2 weeks. The track has reached 3.2m streams and hit #3 on Spotify's Viral Global Top 50, as well as #4 on Spotify's Viral US Top 50. "Zombie"will appear on the band's debut album Disobey, due out May 18. Rolling Stone described the song, "Bad Wolves' interpretation of "Zombie" is moody like the Cranberries', though the instrumentation sounds clearer and more cutting."
The summer amphitheater tour, co-produced by Live Nation and Frank Productions, kicks off on July 16, 2018 in Seattle, WA and will make stops in 32 North American cities. Last week, select dates were announced via Live Nation's Ticket To Rock program. Today, all dates are now available and VIP presale begins today at 12:00 PM EST. Fan Club members have access to the presale tomorrow, March 14 at 10:00 AM EST. Tickets will go on-sale to the general public beginning Friday, March 16 at 10:00 AM at LiveNation.com. Watch a world premiere sneak peek of music from the new 5FDP album in this exclusive tour trailer here. For tickets to the biggest can't-be-missed rock event of the summer, VIP offerings and more info on the tour go here.
"When I'm asked for a tour quote I'm always scratching my head... Is there anything to add?" says Five Finger Death Punch guitarist, Zoltan Bathory. "We are putting together 2018's biggest Hard Rock tour of the Summer; where even the first band on the bill has a massive hit single around the world. There will be fire, there will be lights and it's going to be loud. An experience you can't just download, you have to be there. We all get about 80 summers in our lifetimes, so make them count."
"This is the type of tour package that is all too rare nowadays," adds Larry Frank, Owner Frank Productions/Live Nation. "Five Finger Death Punch, Breaking Benjamin, Nothing More, and Bad Wolves is the kind of tour that keeps music alive and exciting and at the same time introduces the audience to newer bands that will become the next generation of arena rock acts."
Fans purchasing a ticket to the tour will also support a good cause. The co-headliners will donate $0.50 from each ticket sold to two charity organizations close to their hearts. Five Finger Death Punch has chosen C.O.P.S - Concerns Of Police Survivors, an organization whose mission is rebuilding shattered lives of survivors and co-workers affected by line of duty deaths, through partnerships with law enforcement and the community. Breaking Benjamin has chosen Prevent Child Abuse America to help counteract the abuse and neglect of our nation's children by promoting services that improve child well-being and developing programs that help to prevent all types of abuse and neglect.
The current singles of Five Finger Death Punch ("Gone Away", #6), Breaking Benjamin ("Red Cold River", #4) and Nothing More ("Do You Really Want it?", #7) have all entered the U.S. Top Ten Rock Chart with Bad Wolves closely following on their heels with "Zombie" at #14.
Five Finger Death Punch's current single, "Gone Away" (their own rendition of The Offspring's 1997 hit single) has received over 7 million streams since its debut, over 15 million video views on YouTube and topped the iTunes rock and metal charts globally. The song continues to climb up the rock charts and is already at #6 this week. Check out the official video for "Gone Away" and the lyric video.
FIVE FINGER DEATH PUNCH is Ivan Moody (vocals), Zoltan Bathory (guitar), Jeremy Spencer (drums), Jason Hook (guitar) and Chris Kael (bass).
Five Finger Death Punch + Breaking Benjamin Summer Tour Dates
* - 5fdp & Bad Wolves only/ ** - 5fdp, Breaking Benjamin & Bad Wolves only
7/16/18 - White River Amphitheatre - Seattle, WA **
7/18/18 - Spokane Arena - Spokane, WA **
7/20/18 - Taco Bell Arena - Boise, ID
7/21/18 - USANA Amphitheatre - Salt Lake City, UT
7/24/18 - Shoreline Amphitheatre - San Francisco, CA
7/25/18 - Mattress Firm Amphitheatre - San Diego, CA
7/27/18 - FivePoint Amphitheater - Irvine, CA
7/29/18 - Isleta Amphitheater - Albuquerque, NM **
8/1/18 - Austin360 Amphitheater - Austin, TX
8/3/18 - Cynthia Woods Mitchell Pavilion - Houston, TX **
8/4/18 - Starplex Pavilion - Dallas, TX
8/6/18 - BankPlus Amphitheater at Snowden Grove - Southaven, MS
8/7/18 - Hollywood Casino Amphitheatre - St. Louis, MO
8/9/18 - Heritage Park Amphitheatre - Simpsonville, SC
8/11/18 - MIDFLORIDA Credit Union Amphitheatre - Tampa, FL
8/12/18 - Verizon Amphitheatre - Atlanta, GA
8/14/18 - KeyBank Pavilion - Pittsburgh, PA
8/15/18 - BB&T Pavilion - Camden, NJ
8/17/18 - The Pavilion at Montage Mountain - Scranton, PA
8/18/18 - Xfinity Center - Boston, MA
8/20/18 - Budweiser Stage - Toronto, ON
8/22/18 - Lakeview Amphitheater - Syracuse, NY **
8/24/18 - Jiffy Lube Live - Bristow, VA
8/25/18 - PNC Bank Arts Center - Holmdel, NJ **
8/28/18 - Riverbend Music Center - Cincinnati, OH
8/29/18 - Hollywood Casino Amphitheatre - Chicago, IL
8/31/18 - Ruoff Home Mortgage Music Center - Indianapolis, IN **
9/1/18 - DTE Energy Music Theatre - Detroit, MI
9/3/18 - Darien Lake Amphitheater - Darien Center, NY
9/6/18 - Northwell Health at Jones Beach Theater - Wantagh, NY **
9/7/18 - XFINITY Theatre - Hartford, CT
9/9/18 - Blossom Music Center - Cleveland, OH **
Previously Announced 5FDP Spring Festival Dates4/20/18 - KUPD's UFEST - Tempe, AZ
4/21/18 - Las Rageous - Las Vegas, NV
4/27/18 - Welcome To Rockville - Jacksonville, FL
4/28/18 - Fort Rock Fest - Sunrise, FL
5/5/18 - Carolina Rebellion - Concord, NC