Song of the Month Thin Lizzy’s “Angel of Death”

Hard rock and heavy metal have always cross-pollinated. Indeed, Black Sabbath’s guitarist, Tony Iommi, has always considered his band a hard-rock band. Other bands, such as Led Zeppelin, Blue Cheer, and Deep Purple, are considered by some to be hard-rock bands, with others assigning them the moniker of “proto-metal” bands.

Formed in Dublin, Ireland, in 1969, Thin Lizzy are a hard-rock band formed by drummer Brian Downey and bassist/vocalist Phil Lynott. The band’s hits include “Jailbreak,” “The Boys are Back in Town,” and “Whiskey in a Jar,” all of which have facets of hard rock and a blues-driven sound.

In 1981, Thin Lizzy released their 11th studio album, titled Renegade. The opening track on that album was “Angel of Death,” a song that would cross over into the world of heavy metal with its lyrical subject matter and its driving guitar riff. Renegade was the band’s last album with guitarist stalwart Snowy White, who said that he was more suited to playing blues rather than heavy rock. 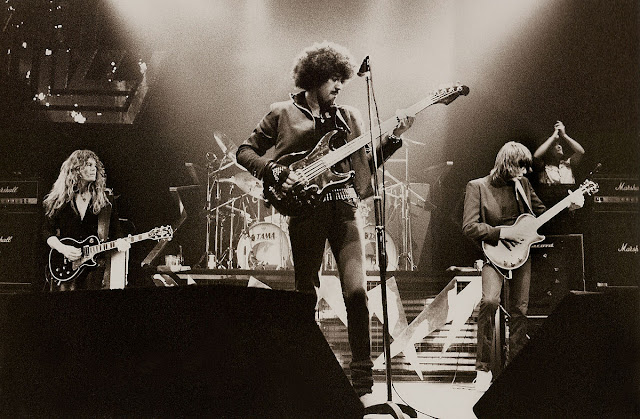 Co-written by keyboardist Darren Wharton and Phil Lynott, “Angel of Death” kicks off with some eerie keyboards, with moments later are punctuated by a hard-driving bass riff courtesy of Lynott. The guitar riff is monumental, climaxed with a keyboard sting in a similar structure as some of Deep Purple’s compositions. Lynott’s gravel-laden voice is at its strongest here, as is the spoken word during the song’s keyboard-saturated interlude.

Lyrically, “Angel of Death” centers on the visions of Nostradamus. The song is bookended by two short spoken-word pieces: “My God, there’s millions of them” and “I think they’re gone now.” The song begins with various visions, such as the San Francisco earthquake, Hitler’s march across Europe, and the first rocket launch. The song then punctuates these with the final vision, that of an Angel of Death, who shall lay waste the earth in one final disaster. To his horror, the narrator understands that there shall be no mercy from God, as he witnessed his own father succumb to a horrible disease (“unknown to man, so he expected no cure”).

Darren Wharton and Phil Lynott wrote alternative lyrics to “Angel of Death.” The opening stanza starts off like this: “I was hanging out in Frisco/In the year one hundred and nineteen six/When I heard about the earthquake/The world trembled from within.”

Song of the Month Thin Lizzy