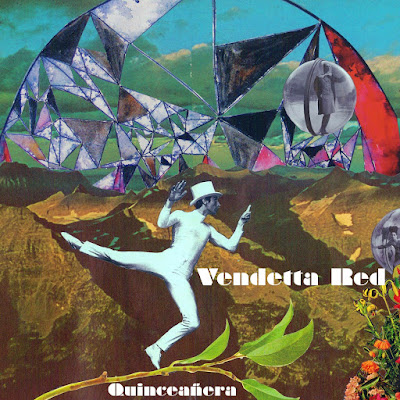 Cranking the beans out of Seattle comes Vendetta Red with their latest album Quinceañera. Their first single to come from this album is, "Encantado" and in truth, it is a cute song. Predictably cute. Nice harmonies and a flow of a feel good, let it all loose afternoon. Would have preferred actually seeing this be a music video creation rather than a lyric video might have given a more substantial vibe.

The album as a whole is 12 tracks, I bit long for listeners nowadays don't know of too many music folks listening to or purchasing anything longer than an EP but this is a mix of grunge, indie, alt, emo throughout so there is something to choose from multiple music ears perspectives. Listening through each track there were times the song lent itself to the days of Soul Asylum, then switch to the feels of The Smiths, and somewhere in amongst the sounds it felt like at times old MCR and Queen might have just busted loose if given half a chance.

Quinceañera is a good mix from a band that stays true to what it is. Solid songwriting, a flow that doesn't taste bitter... it's smooth, not rich, but satisfying rock music. 3.5 out of 5 would definitely fit this album.

11. Til You Have Forgiven Me