The Weird Western that is Bone Tomahawk

The weird western, which combines the western and horror genres, has always been a tricky one to pull off successfully. Clint Eastwood did a great job with 1973’s High Plains Drifter and to a lesser degree with 1985’s Pale Rider. Weird westerns go back to the 1950s, with Curse of the Undead and The Living Coffin in 1959 being some of the first weird western movies ever produced. Perhaps the highest profile horror western was 2010’s disappointing Jonah Hex, which despite a good budget failed to deliver the goods.


With a modest budget, writer-director S. Craig Zahler sets things right once again with his 2015 release, Bone Tomahawk. Flawlessly mixing horror with the western, Zahler creates a compelling story that is riveting and dripping with tension. The only quibble with the movie is some of the writing, with Zahler inspired by the Quentin Tarantino “school” of dialogue. Zahler is an effective writer, but shadowing this type of approach does little to bolster the movie. It is when Zahler is being Zahler—and viewers will quickly pick up these snippets of dialogue—that the movie evokes a black humor few could ever even dare to try to pull off. 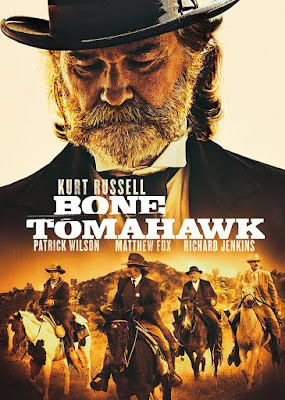 The principal plot of this movie is relatively straightforward. Set in the late 1800s in the American Old West, the movie begins with a couple of thieves and murderers who are busy taking down their latest victims. As Purvis (David Arquette) and Buddy (the always fun Sig Haig) rummage through the dead men’s possessions, they suddenly hear horses coming upon them fast. They take off into the wilderness, where they stumble into what appears to be a Native American burial ground. The idiots knock down some of the stones and bones of the dead, with Buddy dispatched by the owners of the place—right from the start, these do not appear to be cliché Native Americans at all.


The story shifts into a small town, where Purvis manages to make his way. The town is a tight unit, so Sheriff Franklin Hunt (Kurt Russell, in another fine performance) comes to the saloon to check him out. Purvis tries to bolt, so the sheriff shoots him in the foot (apparently, this is his trademark move). Hunt then throws Purvis into jail and summons the doc. However, the doc is drunk, so they fall back on the backup doc, Samantha O’Dywer (Lili Simmons, miscast), whose husband Arthur (Patrick Wilson, in a solid performance) has a broken shin as a result of falling off a roof.


The following morning, Purvis, along with Samantha and the night deputy, are found missing. Clues indicate the possibility of “Indians,” but when a local Native American known as The Professor (Zahn McClarnon, having fun in this role) is summoned to assess the scene, he says that the men who took all three are troglodytes, cave dwellers who to the White Man are indistinguishable from Indians.


The remainder of the movie has Sheriff Hunt—along with Arthur, gentlemen-with-a-past John Brooder (Matthew Fox), and backup deputy Chicory (Richard Jenkins, who steals every scene he is in)—tracking down and taking on the mysterious cave dwellers, who despite their primitive ways hold the upper hand against the Sheriff’s ragtag posse. The movie’s final reel releases the tension full bore, with the camera never flinching at some truly gruesome and violent sequences that will leave most shuddering in the dark.


Veteran writer and rookie director S. Craig Zahler turns in a stellar script and makes for a strong director. The screenplay is polished, with Zahler stilting his dialogue so that it sounds authentically western. However, the script has an undercurrent humor necessary to ensure that the final reel comes off as truly shocking and disturbing. There are hints of the horror along the way, with the environment and those better suited to take advantage of it preying on those who are not.


This movie’s casting of the principals is excellent, with all four leads turning in effective performances. Even the cannibalistic troglodytes (look for the massive Robert Mukes among them) are stellar, as these abominations are not one bit funny but rather crafty, violent, and hideous (wait for the sequence where it shows how the males treat the females of the tribe).


This type of movie has been made before, with The Hills Have Eyes serving as an obvious example. However, Zahler makes this genre his own not only by injecting humor into the mix but also by creating an uncanny authenticity to the characters and their tribulations. This movie shows just how tough and dangerous the Old West was. Moreover, it demonstrates the essence of heroism—and it is not being a gunslinger or even a cliché tough guys. All four men here are tough, but they are also flawed. The true nature of heroism is love, and that theme rings through in this movie.

Bone Tomahawk is not for everyone. However, those who enjoy a thrilling weird western done right will find no better example than this movie. The pace may be a bit slow in some places, but the story will keep most viewers riveted to the screen. As for the final reel, be ready for intensity ratcheted up beyond “10” to “11” in the best Spinal Tap tradition.


Octavio Ramos Jr. is a lifelong fan of all things horror. In his teens, he began to write reviews of horror movies. Since college, he has been writing fiction in the horror genre, as well as writing reviews and commentary on every facet of horror for magazines such as Video Vista, The Zone, Horrorshow, and Albuquerque Horror Examiner. Contact him at octavio_christine_ramos@msn.com.