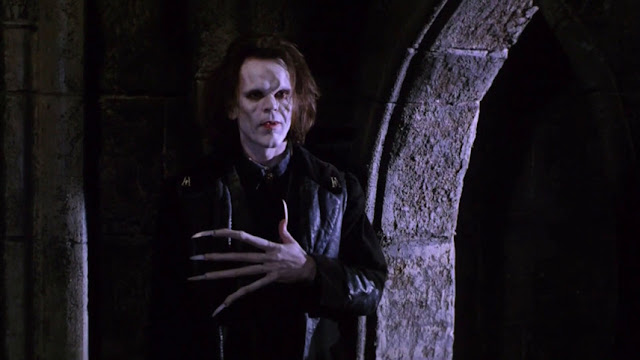 Originally released direct-to-video in 1991, Subspecies is a vampire flick made by Full Moon Studios, with a “Based on an idea” credit going to head honcho Charles Band. Written by Jackson Barr and David Pabian, the first movie in what would become the Subspecies franchise is a low-budget affair with a B-movie vibe. However, director Ted Nicolaou and the cast take full advantage of the storyline and actually create a bonafide vampire flick rich with ideas and some fun moments of gross-out horror. 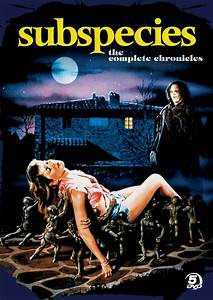 The story begins with the return of pure vampire Radu Vladislas (the demented Anders Hove) to Castle Vladislas, which is still ruled by his father, the king (played by Phantasm’s “Tall Man” Angus Scrimm). It turns out that the king covets a “bloodstone,” an ancient relic that produces the pristine blood of saints that can give pure-bred vampires enhanced abilities. Radu was spawned as a result of his vampire father’s relationship with a mummified witch. Thus, Radu has inherited the power of sorcery. In fact, he can cut off his elongated fingers (inspired by the flick Nosferatu) and turn the disembodied digits into homunculi that do his bidding.

Radu kills his father and takes possession of the bloodstone, but all-too soon he realizes that he has a problem. He has a half-brother named Stefan (Michael Watson), who is a half-vampire (his father’s mated with a human woman). Stefan also covets the bloodstone, but he does not want to be a vampire.


As good as this story is, the bulk of the film elects instead to focus on three college students: Mara (Irina Movila), Lillian (Michelle McBride), and Michelle (Laura-Mae Tate). All of them are supposedly students in Romania to study the culture and superstitious population of the small town known as Prejmer. The three hot girls bump into Stefan, who claims to be a student studying nocturnal animals in the area. As the girls learn more and more about Castle Vladislas and its supernatural doings, Radu turns Mara and Lillian into vampires. Horrified, Stefan attempts to save Michelle from the clutches of Radu, as well as freeing Mara and Lillian from Radu’s control. Sadly, Radu manages to bite poor Michelle, infecting her with his pure vampiric blood. In the final battle, Mara and Lillian are destroyed in the melee. Stefan successfully slays and decapitates his brother, but with the sun rising, he must help Michelle seek shelter from its rays. The two fall into a deep slumber while the homunculi work to bring him back to his undead status.

The shoestring budget for Subspecies keeps the action to one location (the castle and the surrounding countryside) and makes for threadbare special effects. The homunculi suffer most, as they are clearly animated and do not fit well into the live action. The acting is also a little over the top, with the amateurish cast overplaying some scenes. It’s also quite funny to watch Anders Hove struggle with his long fingers, particularly when handling objects like a blade or the bloodstone.


Despite these flaws—quibbles, really—Subspecies is a pure joy to watch. The movie explores many ideas that would become staples in modern vampire cinema, as well as reaching back to movies such as Dracula and Nosferatu for inspiration. There is some nudity, blood, and gore in the movie, but what’s really good about the flick is a genuine attempt to evoke fear and to demonstrate the malevolence of vampirism. Sure, there’s the vampire who despises his heritage, but even he must deal with the eternal curse of bloodlust. There’s also some exploration about vampire weaknesses, as these vampires must retreat from battle like rats because of the morning sun or a religious symbol.

The energy and enthusiasm displayed in Subspecies make it fun watch time and again. Those who yearn for a fiendish vampire tale and are wary of the likes of Twilight should pick this one up. Yes, the budget and acting make for a few cringe-worthy moments, but the bulk of the film is vile dementia that makes for unbridled entertainment. 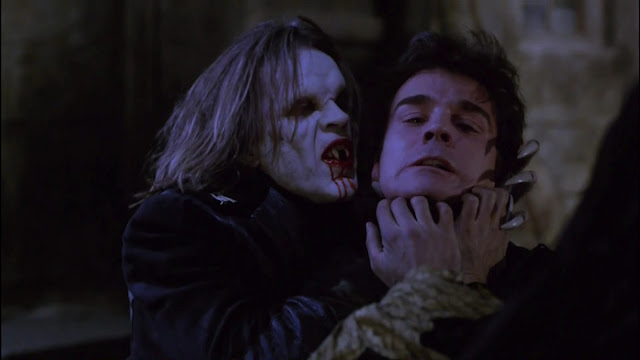