July 04, 2018
From the full-length studio release, Bestial Manifestations of Malevolence and Death 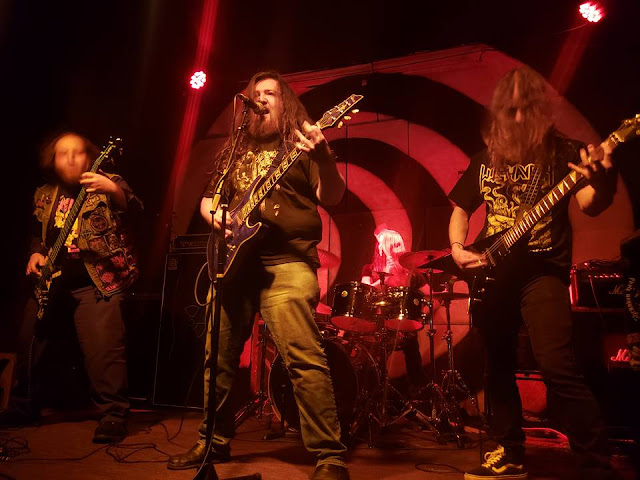 In November 1977, Blue Oyster Cult released its fifth full-length studio album, titled Spectres. The first song the album, one that would be released as a single in February 1978, was “Godzilla.” The song would be the first in the rock and roll genre to showcase the giant monster Gojira, who has since gone on to worldwide fame and spawned a variety of other kaiju (Japanese meaning “strange beast”) as allies and opponents. One of the most memorable lines from this song, written by guitarist/vocalist Buck Dharma, is as follows: “History shows again and again how nature points out the folly of man.” This line refers to Godzilla’s origin, where the giant monster rises and is energized by atomic radiation as a result of atomic testing in the waters of nearby Japan.


In May 2014, Godzilla came to life again (the monster has been killed numerous time during its lengthy franchise run) with a new American version, simply titled Godzilla. Along with a new version of American giant monster King Kong and movies such as Pacific Rim, new generations of fans are discovering the rich world of kaiju.


In keeping with this revival comes a band that plays what it calls “brutal thrashing kaiju metal.” Formed in 2014 and hailing from Seattle, Washington, the band Oxygen Destroyer (the weapon used to destroy Godzilla in the first movie) plays a hybrid version of brutal death metal with facets of straightforward thrash metal. Oxygen Destroyer has released a number of demos, a split with Seattle’s death-metal outfit Carnotaurus, and a single. In 2018, the band made its independent debut with the full-length studio CD, titled Bestial Manifestations of Malevolence and Death (April 2018).


It proved difficult selecting one track from this debut album, as every song is dedicated to kaiju, such as Mothra, Space Godzilla, Mechagodzilla, and even Destroyah. However, there are two songs that are dedicated to the one and only Godzilla: the last track “Atomic Breath” and the second track, “Cleansing the Earth of Humanity’s Existence.”

Similar in structure to compositions such as Judas Priest’s “The Hellion/Electric Eye,” “Cleansing the Earth of Humanity’s Existence” kicks off with an intro track, one titled “Born of Nuclear Energy.” This short intro opens with air-raid sirens, followed by what sounds like an atomic blast. As the blasts reverberate to silence, massive winds blow past the speakers. Then it comes, Godzilla’s foot stomps, followed by the monster’s signature roar.


As the monster’s roar dies down, “Cleansing the Earth of Humanity’s Existence” kicks in, throwing down a set of heavy guitar riffs, courtesy of Jordan Farrow and Joey Walker. The wall of sound is impressive, evoking a doom-like atmosphere out of sheer density and plodding dissonance. But this is only temporary, as drummer Chris Craven signals a tempo change by going for outright blast beats while bassist Ben Williams throws down his own chunky, buzzsaw-like sound. This combination of brutal death metal rips from speaker to speaker, with Farrow’s raspy screech spewing out the first verses of the song. There’s such heaviness even during these breathtaking moments of speed that really ups the song’s intensity. Walker’s searing solos come right out of thrash metal, but it’s a welcome old-school sound, one filled with fury that forces melody to succumb to the realm of pain.


Lyrically, the song summarizes the plot of the original Japanese version of Godzilla (not the English version with Raymond Burr, which softened many of the themes found in the Japanese version). The song links Godzilla as a force of atomic radiation, one angered by the arrogance of humanity. There’s a startling line that like the movie showcases the aftermath of one of Godzilla’s first attacks: “Survivors of the massacre weep with sorrow and despair/Cradling the scorched cadavers of their butcher's sons and daughters.” The song ends with a dire warning: “Deities of the apocalypse shall arise.” Indeed, and many will come from space.


One of the great characteristics of heavy metal is its ability to tap into various genres and produce musical gems that bring yet another layer to such genres. Nile does it with Lovecraft’s writings, The Vision Bleak and Mortician mine the realm of horror, and Domine delves into the worlds crafted by Michael Moorcock (who wrote some songs for Blue Oyster Cult). Now there’s Oxygen Destroyer, whose members have just started to explore the exciting genre of giant monster movies. I can’t wait to hear more.