Given the sad state of American horror, I was prepared not to enjoy Sinister. Indeed, I was not a fan of writer-director Scott Derrickson, whose previous films The Day the Earth Stood Still and The Exorcism of Emily Rose gave little hint of effective horror storytelling prowess. However, it turns out that I very much enjoyed Sinister, which despite some missteps in pacing and dialogue nevertheless will make an impression on those hardcore horror fans who believe that it is not possible for America to return to its heyday of horror supremacy.

Sinister revolves around true-crime writer Ellison Oswalt (well played by Ethan Hawke) who experienced quick success from his first book but has since become an “ambulance chaser,” annoying both the victims of hideous crimes and law enforcement (he is critical of their inability to solve such crimes). Oswalt’s methods are questionable. For example, to write his last book, he moved his family into a house three doors from that of the crime scene. What could be worse than that? How about moving his family into the house wherein the backyard a family was hanged?

The found-footage genre is used to good effect here, as Oswalt finds a box of super 8 movies and a projector in the attic. He also encounters a black scorpion, which is weird but is actually logical, given the storyline. Oswalt soon discovers that the film reels contain the murders committed by what appears to be a serial murderer. As Oswalt delves deeper and deeper into the movies, recording them digitally and using software to augment key scenes, he finds a mysterious figure in each background murder—that figure looks like something out of a Norwegian black-metal band, but it is really something much more, well, sinister. 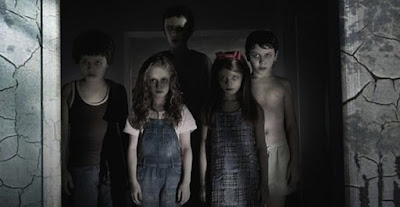 Oswalt is so immersed in this research that he cannot see that this creature, this bogeyman, is now after his family. All the clues are there, but Oswalt (and perhaps the viewer upon first screening the film) misses them, and thus he succumbs to the horror of the creature named Bughuul, the devourer of children. The film’s climax is inevitable and frustrating, as Oswalt does not put up much of a fight. However, a second viewing is much more satisfying, as all the clues will jump out, making the ending the only ending possible, given that Sinister is ultimately a horror film.

Sinister is a very good horror film, one worth multiple viewings, each of which is satisfying. The mythology of the creature is engaging and based on pagan myths (the source of most demons, by the way) that combine facets of the Arabic ghul (the ghoul) and the bogeyman. The found-footage angle is milked quite well, as it is in this netherworld of film that the Bughuul exists, traveling through it to secure its victims. Thus, this creature taps into the reality-television generation quite well, as a modern obsession with the unwatchable is slowly eroded through the motion picture. Oswalt’s plight is palpable—he was once a darling of the media, and rather than share his discovery with law enforcement or even with a university professor who possesses knowledge about the creature, he instead keeps the information to himself, hoping to exploit it. 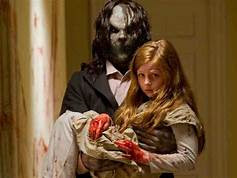 Although the principal storyline is the genesis of the horror, Sinister really excels in the home movies the viewer is allowed to luridly experience throughout the film. Each reel is much more graphic and grisly that the previous one, and yet I found myself begging Oswalt to continue threading the reels to completion. A later “extended versions” discovery felt a bit forced, but I also found myself gleefully waiting for Oswalt to thread the new scenes into the footage. And like films such as Texas Chainsaw Massacre, there is little actual bloodletting, with the scenes filmed so well that audience imagination fills in the most hideous elements of each family murder. 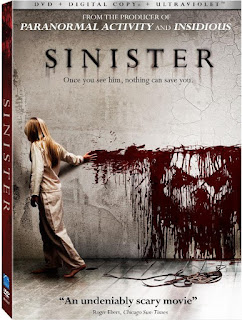 Sinister comes with two audio commentaries, a couple of short features, deleted scenes (with and without commentary), and a theatrical trailer. If anything, Sinister gives me hope that American filmmakers still have the talent to make really good horror films. It was refreshing to watch a movie without teenagers bantering and disrobing, a supernatural creature that is repelling and alluring, and characters who do things based on their own motivations and not because the script deemed it so. Horror hounds should watch Sinister at least three times: first to be shocked, second to find all the clues, and third to simply sit back and enjoy the mayhem.