Morning Coffee with Adrian Galysh, the Man Who Taught his Guitar to Sing 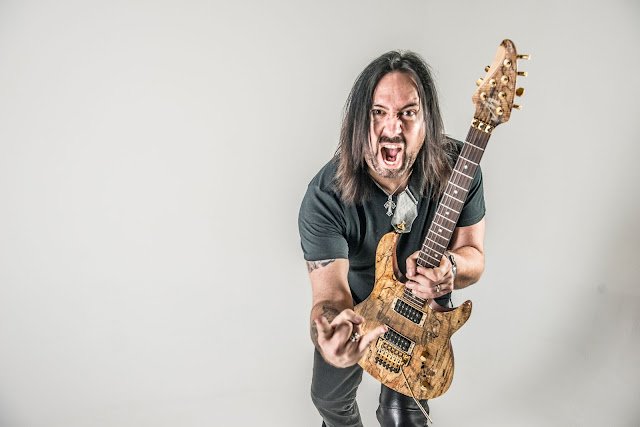 Carox:  I woke up this morning and I played So Close…So Far before this interview. That is a great song to wake up to! After so many interviews (congratulations), I wondered if there were any questions left for me to ask, and I found that there still were. My first question to you this morning - is there a particular song or band that started your love of guitar playing?
Adrian: I would say there were specifically two. The first being the guitarist Randy Rhoads with the Ozzy Osbourne band.  I tell most people that when I first heard songs like Crazy Train and Mr. Crowley with these extended guitar solos at the age of nine or ten, I just could not believe what I was hearing. I was like “oh my god, music can be like this, and guitar playing can be this exciting and it really peaked my curiosity and I was like if it’s this exciting to hear it, it must be just as exciting to play it!” I really felt like I was drawn to it and I remember begging my parents to get guitar lessons. Then I would say quickly after that early Van Halen of course, most guitarists in the 80’s were influenced by him and hearing him. Early on those two made me want to do it the most.
Carox: Now where did you hear that music - was it on the radio?
Adrian: Some of it would be on the radio, but I had two older brothers, one was four years older than me and the other was eight years older than me. So when I was eight or nine they were already in high school and listening to that type of music. I think that is where I started since they began to buy and collect records and cassettes and I was just sort of there and I would do it too!  I think any time I had some extra pocket money, there was a record store close to the grocery store in the neighborhood where we lived, so every time my mother would go to the grocery store I’d go to the record store. And so every three weeks or so I could buy something.
Carox: I remember that too. It was always so exciting to buy a new vinyl - you would open up the package and be like giving yourself a present.
Adrian: That, and at the time I was probably too young to watch MTV then, especially in this day and age if you want to know about music you can find it in so many places! But back then, all you had to go on was the pictures on the front and the back or inside of the album cover to go on, and you had to use your imagination what these people were like! 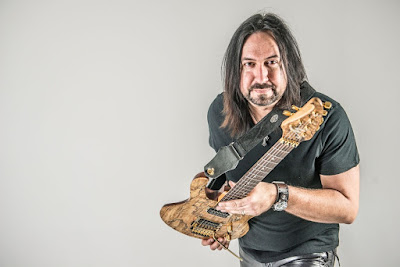 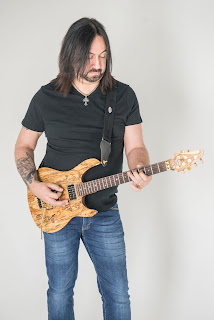 Carox:  That must have been a wonderful experience.
Adrian: Yes he is just a guy who is what he is. You look at him now and wow  - is he really wearing the same clothes from the albums covers in the 70’s? He really is. He still sounds like him and he still has that tone. That kind of thing is ageless.
Carox: Yes, he is an extremely authentic musician. Now I understand that you have put some of your songs together remotely in a home studio?
Adrian: Generally, I record as much as I can in my home studio.  I can’t do drums here cos it’s in a house. All the guitar parts, bass parts, keyboards and even vocals in previous records - all of that gets done here I get it as close as to how I think it can be even with programmed drums and once it is as far as  I can get it we take it to a real studio where somebody is going to set up drums and a microphone for it. So that is what I did for this record went to a studio for one day and had (Alice Cooper stickman) Glen Sobel track drums. Then I have digital files at home, then I might adjust things according to how he played. If he is putting in his version of a groove then I have to kind of adjust it. Then when I had Stu Hamm playing, we did it over over texting and stuff, and emails, he would send it to me and then we would make comments and then any changes we would make the changes.
Carox: Are we going to see a time when you bust out as and go on tour with that album?
Adrian: Two weeks ago we did the CD release party and performed the whole album in the first set, but what I usually end up doing is going around the country, with guitar workshops, festivals, schools and colleges clinics and master classes.
Carox: Might be fun for you to hop on a tour bus, I’m sure everyone would let you go!
Adrian: My credit card would not like it but yes. 10 years ago I did short eight or nine days for my album Earth tones with two other guitarists and it was a ton of fun. I drove the van, everybody piled in. There wasn’t a map app on the phone; you had to print out directions! You couldn’t wipe the smile off my face. As expensive as it was, but was it was a good thing was a good thing!
Carox: Adrian, I really enjoyed listening to your album and talking to you today!
Adrian’s shows: http://www.adriangalysh.com/tour.html
Adrian Galysh Venusian Sunrise: 20th Anniversary Edition
Release Date: 7/10/2018
"So Close...So Far" Press Release: https://madmimi.com/p/61e45c
Pre-Order: https://adriangalysh.bandcamp.com/album/venusian-sunrise-20th-anniversary-edition