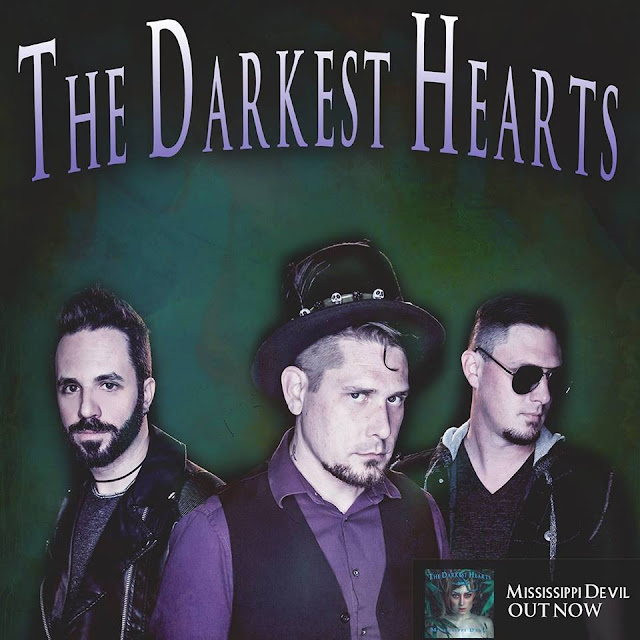 Tracking Unsigned Artists Interview
TUA: There is something to be said for a name. Sometimes it means something, other times it just sounded right. Where did The Darkest Hearts name come from?

The band’s name came about when Kramedj and Luke were sitting and chatting about how they were writing a lot of dark songs lately, Kramedj then said it comes from the darkest part of my heart and we broke out laughing and The Darkest Hearts was born.

TUA: Describe the music you make. (Give details to its sound, lyrics, and structure)
The Darkest Hearts’ Sound is rock ‘n’ roll at its core while, it takes from many different styles along the way including southern rock, blues, punk, hard rock, pop, and alternative. Imagine when a player from a football team comes out and slaps hands with all the other players that’s essentially what the sound of The Darkest Hearts does with other genres. We love dynamics and diversity so you will not be bored at one of our shows!

TUA: What formats do you prefer to release your music on? Digital, CD, Vinyl, Cassette, All the above?
The Darkest Hearts has historically released new music Digital and on CD. We’d love to know if Vinyl is something our fans would like so, Do you? Send us a message: DarkHearts@TheDarkestHearts.eu

TUA: Your current single playing on TUA's list, “Mississippi Devil,” tell us about the song.
First, Thank you! That’s Awesome! “Mississippi Devil’s” story began with a girl I (Luke Vavrek) was talking to whom I wasn’t sure of, I was intrigued but also felt a strange vibe that seemed to polarize me and so nothing came of it more than some fun flirting. She shortly after moved to another state for a guy who she’d never met. The music started with the main kinda bluesy groove verse lick that was influenced by ZZ Ward. I played the lick one day screwing around and Kramedj just started wailing a melody that stopped me in my tracks. I was like “holy sh%T!” we need to do this! Kramedj and I collaborated on the lyrics and so there are actual meanings for Mississippi Devil personally to us but one overall theme: Attraction to something that can be dangerous but you can’t live without.

TUA: In your opinion why is playlisting important or not important to you and music? What suggestions might you give to other bands wanting to utilize Spotify to its fullest?


Playlisting is absolutely imperative! Visibility is the biggest hurdle I feel for new bands so sharing and playlisting helps spread the word and reach new people who may be into what you do.